This Roasted Pork Tenderloin is an easy way to prepare a lean protein for dinner that’s flavorful and pairs well with many different sides. It only takes 20 minutes to cook!

Anytime I see pork tenderloin on sale at the store, I always snatch it up. It’s such an easy meat to cook as the focal point of any dinner. 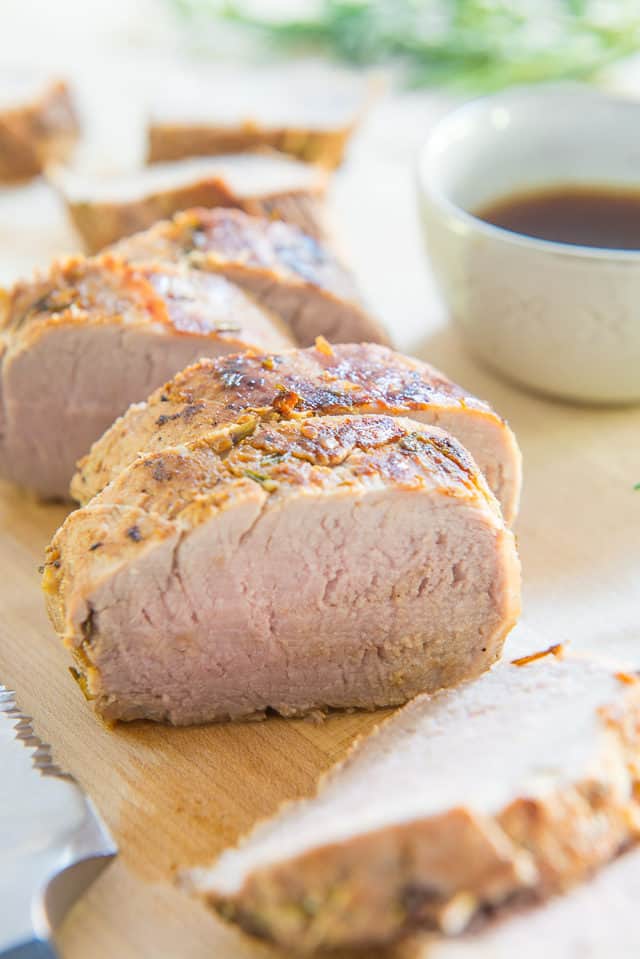 Pork tenderloin has gotten a little more expensive over the past 5 years, but it’s still a relatively affordable cut of meat.

Especially considering it’s trimmed up already, and there’s no excess fat to cut away.

What you get and cook is pretty much all lean protein that can be sliced and served.

Just as with beef tenderloin, pork tenderloin is a really lean cut, but relatively tender since it’s not a heavily used muscle.

Because it’s so lean, I like to flavor it with a marinade or at least with some spices, which I’ll go over further below. 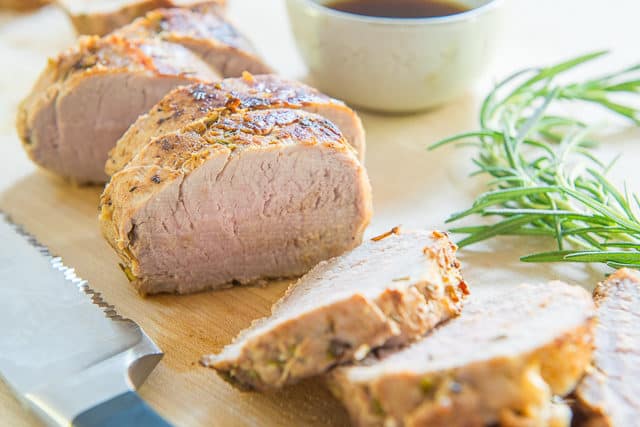 One really nice thing about roasted pork tenderloin is how well it goes with many different types of sides and dishes.

I love serving it with Crispy Smashed Potatoes and Greek Zucchini Salad, but this Mediterranean Quinoa Salad goes really well with it too.

How to Make Roasted Pork Tenderloin:

This first step is optional, but I like to flavor the pork with a marinade or spice mix.

While you can do just salt and pepper, pork tenderloin is such a lean cut of meat that it really needs some sort of flavor. 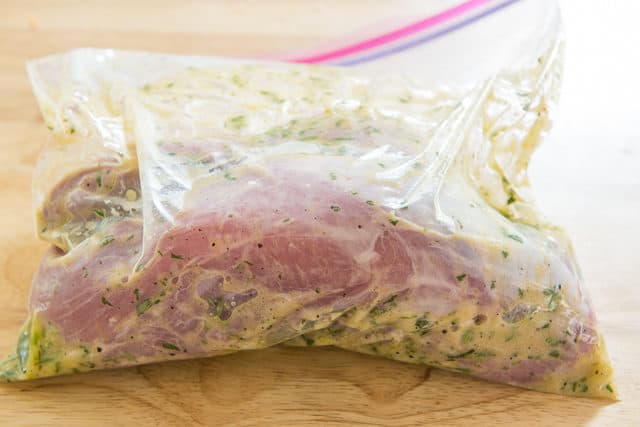 If I don’t have the time to marinade, I’ll at least rub on some Sazon Seasoning, which goes beautifully with pork. 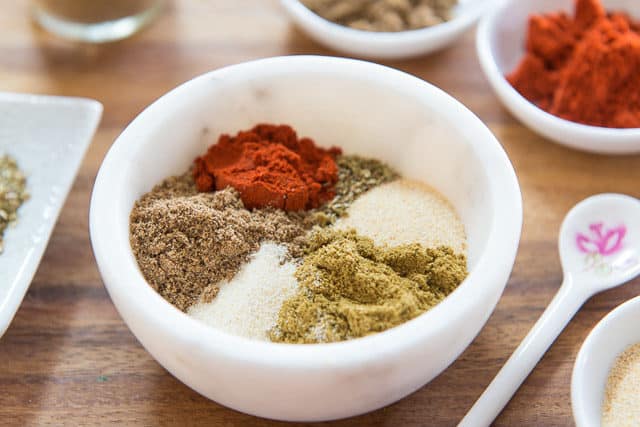 To cook the pork, heat a large ovenproof skillet over medium high heat, then sear the pork tenderloin all over for about 3 minutes total, until golden brown: 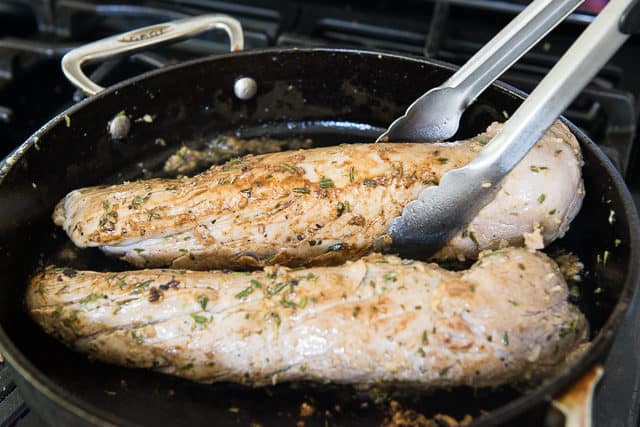 Technically you could skip this step and just throw the pork tenderloin in the oven, but it will look a bit pale on the outside.

The searing also helps develop flavor and caramelization on the outside.

After searing, place the entire skillet into the oven. The pork will receive heat from the hot air circulating around, plus it will keep searing from the heat of the skillet.

So, I’ll flip the pork over about halfway through the oven roasting period to keep things even.

How Long to Roast Pork Tenderloin:

For the standard 1-lb or 1.25lb piece of pork tenderloin, usually no more than 10-15 minutes in a 450F oven. You want the interior temperature to reach 140F.

A thermometer (affiliate) is essential for making pork tenderloin, as it’s more difficult than other cuts of meat to go by feel. Since there’s such little fat in the meat, there’s little wiggle room for overcooking.

You can get a good thermometer for $10. I use mine all the time because I don’t like risking overcooked meat. 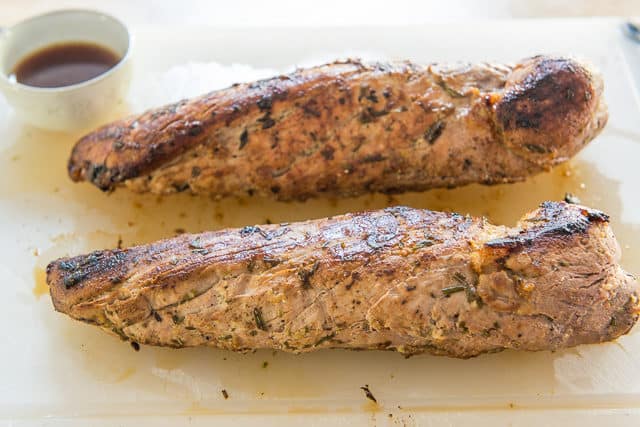 Once the pork has reached the target temperature of 140, remove it to a plate and let it sit for 10 minutes.

During this time, the pork will continue cooking another 5 degrees or so, and the juices will get a chance to redistribute. 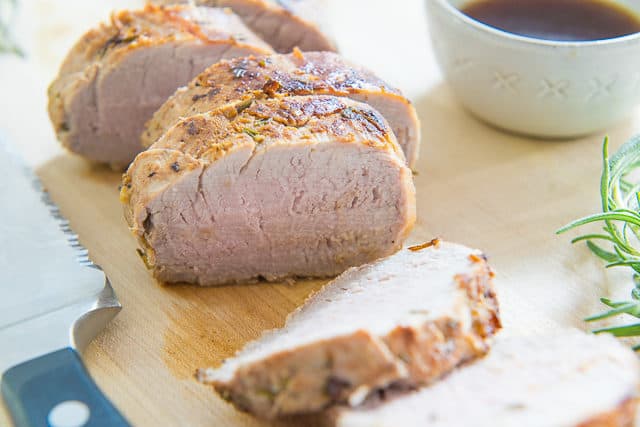 Cut the pork into slices, and serve. I like to collect any of the juices from the plate and put them into a little bowl on the side for dipping. There’s so much flavor there.

Slow Cooker Pulled Pork is another one of my staple pork dishes in the house for mealtime. Enjoy!

What to Serve with Pork Tenderloin:

Can pork tenderloin be pink inside? Yes, the recommended doneness for pork is 145F, which will have pink inside. We pull the pork from the oven at 140F, and the meat continues to cook another 5 degrees, so it’s perfectly done.

Will it shred? No, this is not the right cut to use for shredding. You want pork shoulder for that like in this Pulled Pork recipe. 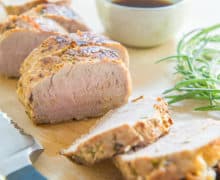 *I find that nearly all grocery stores sell pork tenderloin that is already trimmed, with silver skin removed. However, if you see any, remove it with a sharp knife before cooking.