Shrimp and Grits is a classic Southern dish that’s quick enough for a simple weeknight meal.

You can even cook the grits hands-off while you prepare the shrimp. 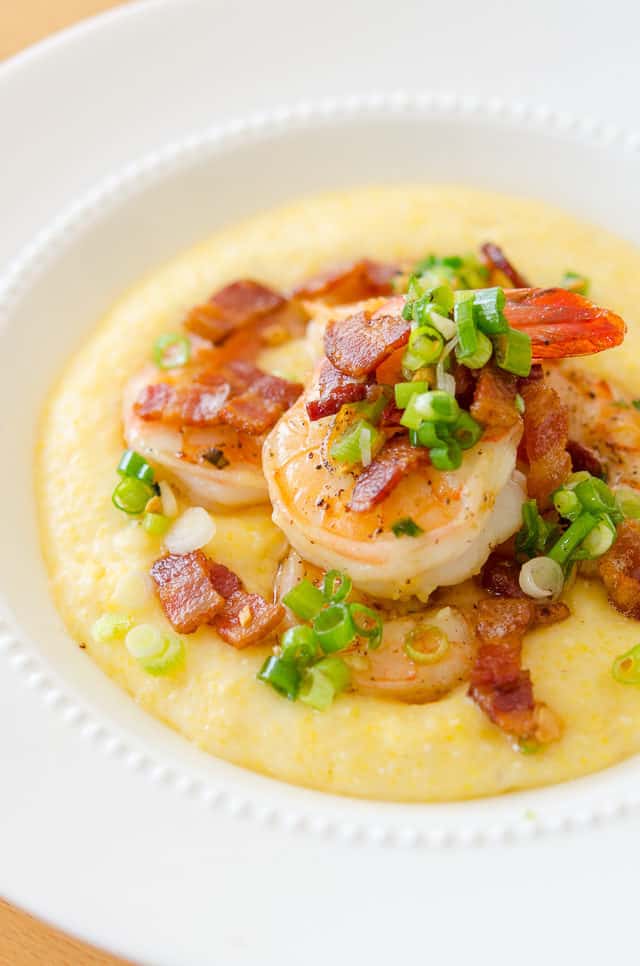 These are a few of my favorite quintessential Southern dishes that I came to love during my few years living in the South.

I was shocked when I first discovered how ridiculously easy it is to make shrimp and grits, because it’s such a typical restaurant dish that I think of as really flavorful and full of pizzazz.

But it actually makes sense as the perfect way to show off all the local, wild shrimp that is so good and fresh in the area. The simple flavors enhance the shrimp while still letting it shine.

Living in Coastal Georgia, I would often drive down the road and see people selling fresh shrimp on the side of the road, freshly caught from their boats. 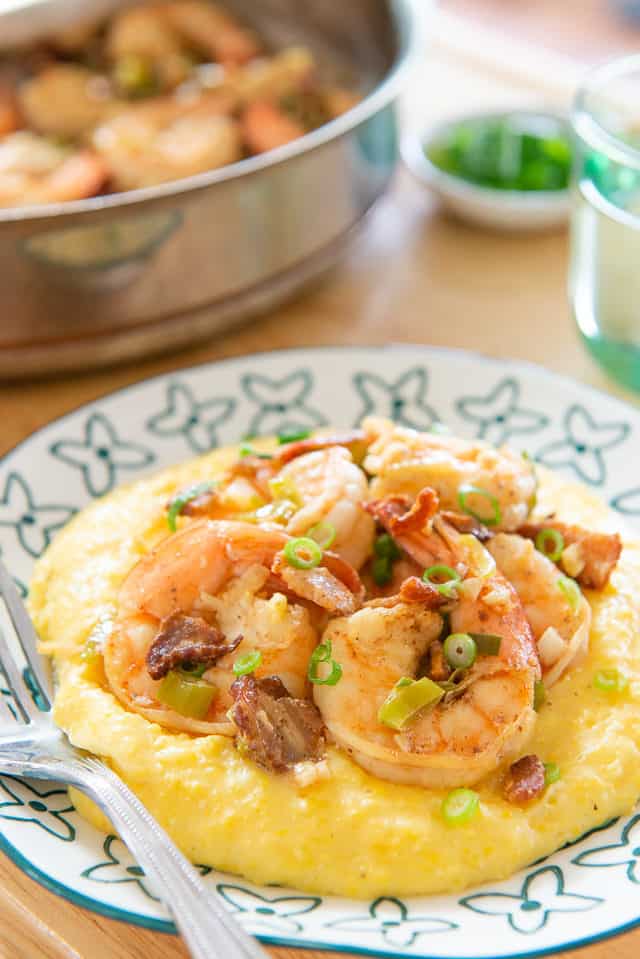 Now that I’m back in the Northeast, I can only get my shrimp from the grocery store, but it has been surprisingly easy to find wild shrimp for this dish.

And it’s often not even more expensive than the farmed shrimp.

While I won’t say that you can’t use farmed shrimp at all here, the wild ones really do have a TON more flavor, and I think that’s really important here. So do your best to find some, even if you have to peel them yourself.

How to Make Shrimp and Grits:

You want to get the grits cooking before you start the shrimp, and you can either cook them in a rice cooker or in a pot on the stove.

I’ll share more info about that below, but first let’s go over the step-by-step for how to make the shrimp.

In a large skillet, cook some sliced bacon until it’s crisp and cooked through: 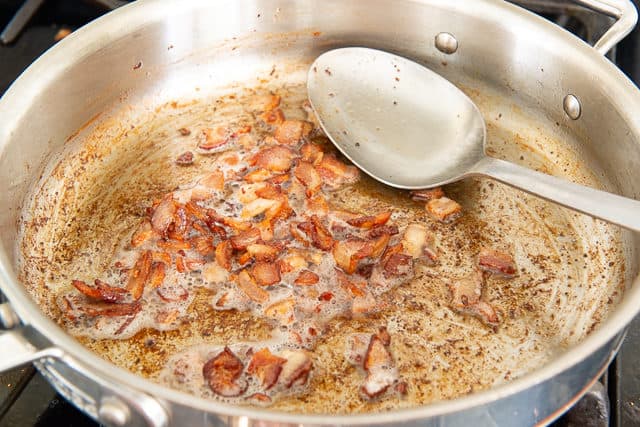 Remove the bacon from the pan with a slotted spoon, leaving all the brown bits and bacon fat behind.

Add shrimp to the pan in a single layer, and season with salt and pepper: 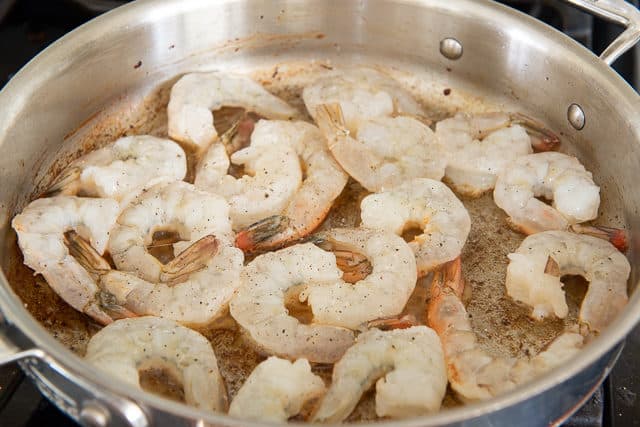 For this recipe, I recommend using high-quality wild shrimp, if you can find some. They are much more flavorful than farmed shrimp.

Cook for only 60 seconds on the first side, and give them a flip.

They should have a nice brown color and be coated with the brown bits of flavor from the bacon: 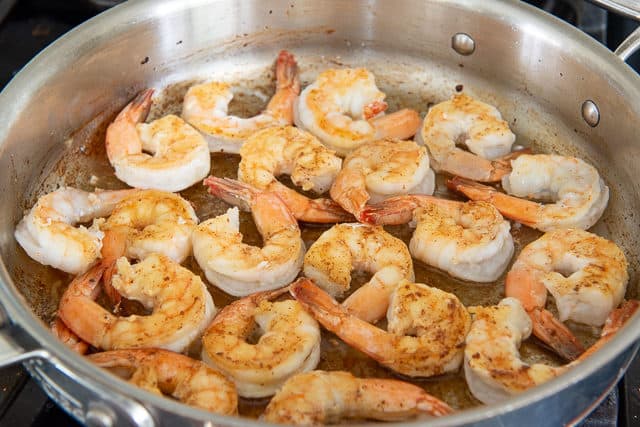 Make sure to season the other side of the shrimp with salt and pepper, if you haven’t done so already.

Then add fresh garlic, scallions, fresh lemon juice, and the crisped bacon back to the pan: 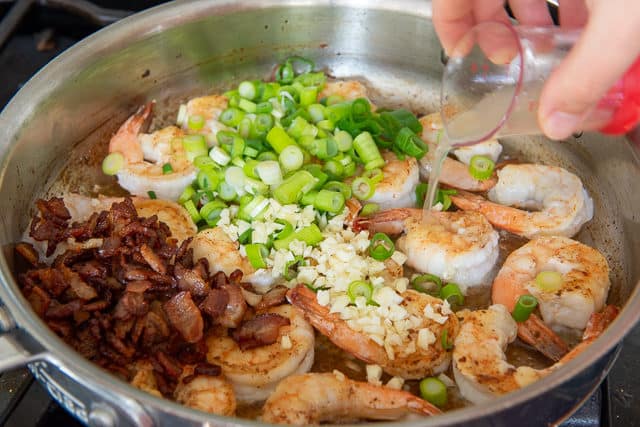 You can also add a couple dashes of Tabasco if you’re into a little heat.

Stir everything around and keep cooking for another minute or two, until the shrimp are just barely cooked through: 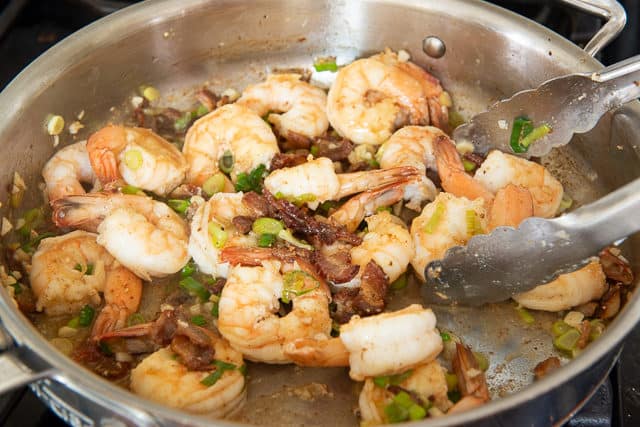 It is SO, so important to be really careful about not overcooking the shrimp.

I actually aim for slightly undercooked, as the shrimp will keep cooking slightly from carryover cooking. I hate rubbery shrimp!

How to Make Grits:

As far as the grits go, I’m able to make them successfully in my rice cooker, which is nice for making it completely hands-off.

How to Make Grits in a Rice Cooker: I simply place grits, water, and a pinch of salt in the rice cooker, and turn it on. Then once the cycle is finished, I simply stir in the butter, cream, and cheese, and it’s perfect every time. A word of warning: results may vary depending on your model, but I’ve tried it on two and it always goes great.

How to Make Grits on the Stove:

Bring water to a boil in a saucepan, then add the grits and salt. Simmer the grits with a lid on for about 20 minutes, until the water has absorbed.

Turn the heat off, then add heavy cream and butter: 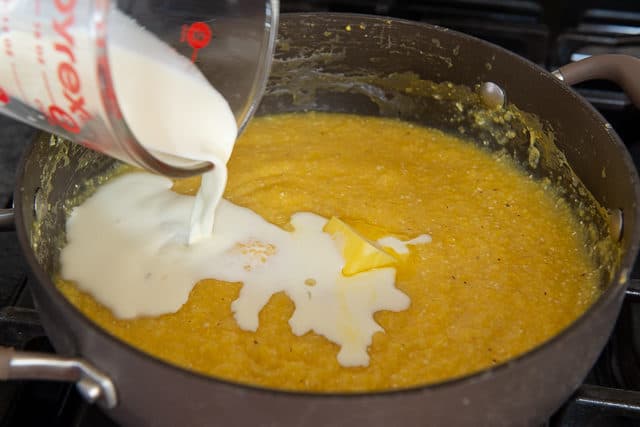 This will cool the mixture slightly, and then you can add some shredded cheese: 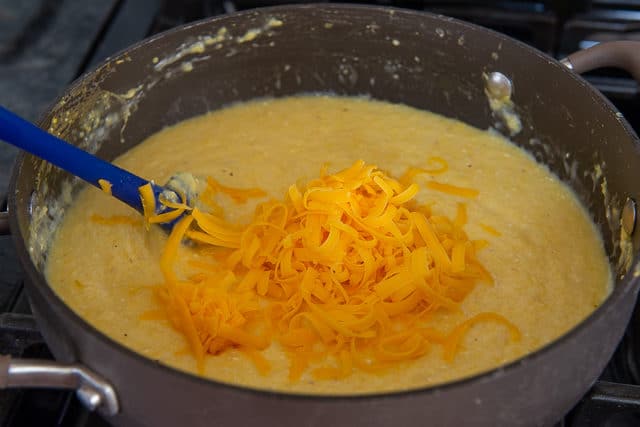 Remember that cheese can break and get grainy if overheated, so that’s why we let the residual heat melt the cheese.

Stir that through until you get a creamy, thick texture, then make any necessary seasoning adjustments. 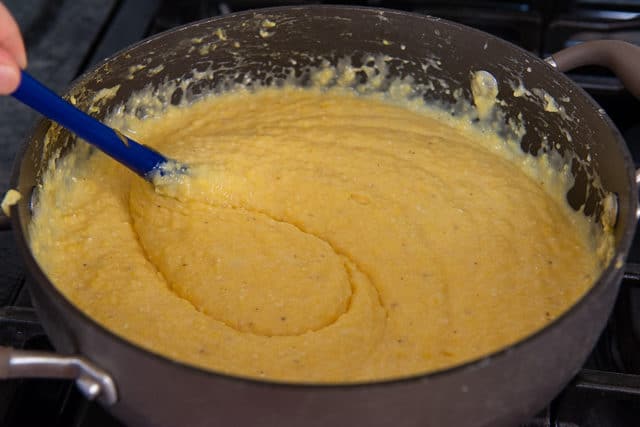 You may want to add more salt, butter, or cheese.

If you’re not ready to serve the grits right away, make sure you keep the lid on to keep the grits warm, otherwise it will get stiff.

However, if this happens, simply add a little water or milk, turn the heat back on, and stir for a couple minutes until it’s smooth and flowy.

When you’re ready to serve, spoon some grits onto the bottom of a shallow bowl or plate, then add the shrimp on top: 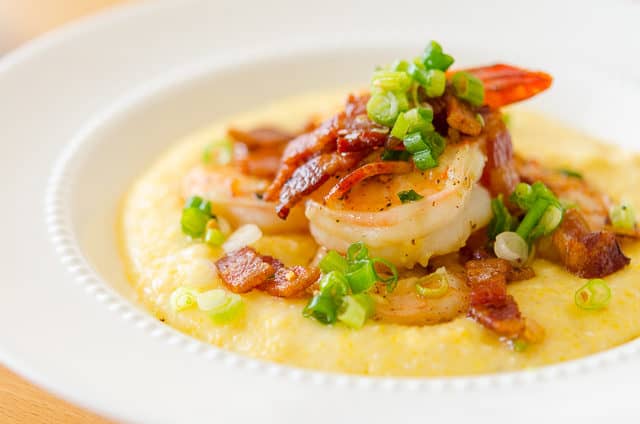 Shrimp Salad, Peel and Eat Shrimp, and Coconut Shrimp are more of my favorite shrimp dishes on the blog. Enjoy! 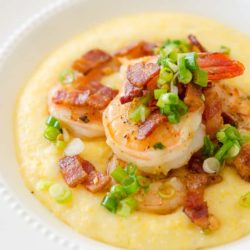 How to Make the Grits:

How to Make the Shrimp:

44 Comments on “Shrimp and Grits”