I’ve never been impressed by any of the Carnitas recipes I’ve tried online or in books…UNTIL NOW! This crispy pork Carnitas Recipe method by Diana Kennedy, requiring only pork, water, and salt, is the simplest and most delicious carnitas recipe I’ve ever had.

These carnitas are not made in the slow cooker, which is a good thing.

I love my slow cooker as much as the next person, but so many of the carnitas recipes online are crock pot versions, with results that are a far cry from the truly crispy chunks of tender pork that you normally get at Mexican restaurants and taco joints. To the point where I personally wouldn’t call them carnitas.

But this method? It will give you authentic, crispy but tender carnitas at home.

If you’re not familiar with carnitas, they are basically crispy, savory chunks of tender pork, and they are particularly great for filling tacos and burritos.

This particular Carnitas recipe is from Diana Kennedy, a long time Mexican cuisine cooking authority (she’s currently 99 years old)! I’ve only discovered her work recently after coming across this recipe in the Genius Recipes cookbook, and this recipe alone has made me a fan.

You may have noticed that a lot of carnitas recipes on the internet call for orange juice, lime juice, oregano, and so on.

We’re not doing any of that here, because this is all about the rich flavor of the pork, and making the meat the star. We’ll keep it traditional, only using pork, salt, and water.

Start with the right pork – For proper carnitas, you will need to buy pork shoulder, which is also known as pork butt or Boston butt. Don’t be afraid of a fatty cut, as the fat is what gives the rich flavor that you want in the dish. Do not attempt this with lean cuts like pork tenderloin or pork chops.

Use a quality pan – This is not a good recipe for using a flimsy, cheap skillet, because otherwise the pork may burn in the bottom of the pan. Once the water has evaporated and the pork is crisping up in its own fat, you will need to watch closely to make sure the meat doesn’t scorch.

Don’t discard any of the fat – When you’re ready to plate the carnitas and remove the meat from the pan, make sure to take the fat and drippings with you to the serving dish. That’s where all the best flavor is.

Begin by cutting strips of pork shoulder, and place them in a high-sided skillet or wide dutch oven:

Diana’s recipe recommends fairly large chunks that are 2 inches by 3/4 inch in size.

What Meat to Use

Pork shoulder: This cut of meat that we’ll be using also goes by the name “pork butt” or “Boston butt” at the store. Even though it’s called pork butt, it actually comes from the shoulder of the pig. It’s the same cut of meat that you’d use to make pulled pork.

Bone-in or Boneless: You may purchase either a bone-in or boneless piece of meat, but the boneless piece may be easier to cut up if you’re not familiar with cutting around the bone.

Quality: Not all meats are created equal. Try to go for the best quality you can, ideally a pasture-raised pork with lots of fat and marbling.

Add enough water to cover the pieces of pork:

Also season the water with plenty of salt:

Simmer the pork for about an hour and a half until the water eventually all cooks off.

It will look a little unappetizing until the water cooks off, but stay the course. The slow cooking in the water helps with the rendering and eventual crispiness, and it’s the same magic as when people cook their bacon with water for the crispiest and best end results.

As the water starts to cook off, beware that it will look like there’s more water than there actually is, because a fair amount of rendered fat will be left over in the pan. Make sure you don’t forget about the pan, and check it every 5-10 minutes.

Eventually when the cooking liquid is all gone and the rendered fat (lard) is left, the pork chunks will brown and crisp in their own rendered fat:

Make sure to take your time at the end to thoroughly brown the pork in this fat. It develops the flavor significantly and also crisps up the fatty bits.

Now there are the glorious “little meats” that this dish promises in its name. Enjoy!

It’s recommended that you don’t shred the carnitas, but leave them in their chunk form. But of course, this is up to you! Shredded pork is great for tacos.

I do recommend though that you scrape all the drippings and rendered fat from the pan into your serving dish, so you don’t leave that flavor behind. It’s the best part!

Carnitas are wonderful as the protein for recipes like tacos, burritos (or burrito bowls), rice bowls, etc. I throw these carnitas into this breakfast burrito recipe, I saute green beans with the rendered fat and pork shreds, I make huevos rancheros with the meat, and so on. There are so many ways to use it up, and you may even just want to eat it by itself, it’s so good!

As far as what to serve with the carnitas, I like most typical Mexican food pairings, like Mexican Rice, Mexican Street Corn Salad, Jalapeno Tomato Salsa, pico de gallo, and Guacamole.

How do you store leftover Carnitas?

Store in an airtight container in the fridge for up to 5 days.

Can you freeze leftover Carnitas?

Yes, the meat will freeze beautifully! Store in an airtight container in the freezer for up to 3 months. To thaw, leave in the refrigerator overnight.

How do you reheat Carnitas?

For the easiest method, you may microwave portions in 30-second intervals until warmed through. However, the meat will not be as crispy. For the crispiest reheating method, re-fry the carnitas in a skillet over medium high heat for about 5 minutes, until warmed through. For the best results, add some extra lard (1 to 2 tbsp, depending on amount of meat) to the pan before heating.

Can Carnitas be made with boneless pork loin, pork chops, or another cut?

Not really. You need the pork shoulder (aka boston butt) because it has fat that will render down and eventually fry the pork chunks. Pork loin and pork chops are pretty lean.

Can you make this recipe in an Instant Pot?

Perhaps, but it’s likely too much of a bother. The instant pot is likely too small for a typical pork shoulder, and you’d need to sauté for a while to cook off the water needed for browning.

Part of the benefit of cooking the pork with only salt is that you get to taste the nuances of the meat better. However, feel free to experiment with adding other flavors. Here are some ideas for next time:

Spices: Add any spices you wish here. Sazon Seasoning is wonderful, but you can try a simpler dry rub with chili powder, black pepper, garlic powder, onion powder, and so on. 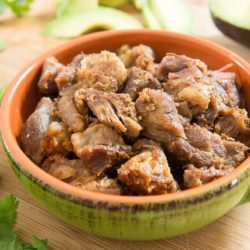 Diana Kennedy’s recipe says you should brown the pork for 70 minutes at the end, but I found that it was plenty browned and tender after 30 minutes of final browning. This recipe is adapted from Diana Kennedy’ Carnitas recipe. Storing leftovers: Store in an airtight container in the fridge for up to 5 days. Freezing: Store in an airtight container in the freezer for up to 3 months. To thaw, leave in the refrigerator overnight. Reheating: For the easiest method, you may microwave portions in 30-second intervals until warmed through. However, the meat will not be as crispy. For the crispiest reheating method, re-fry the carnitas in a skillet over medium high heat for about 5 minutes, until warmed through. For the best results, add some extra lard (1 to 2 tbsp, depending on amount of meat) to the pan before heating.

Thank you! You have successfully subscribed to Fifteen Spatulas new posts notifications.
« Previous PostEgg Salad
Next Post » How to Make Sushi Rice in a Rice Cooker