This Slow Cooker Pulled Pork is incredibly easy to make, and works great as the main course or as added protein for other recipes. We make a batch every week, and after testing various methods for doing it (like searing vs no sear), this is my favorite way to make it.

Pulled pork is the next best thing to chicken breast as far as keeping protein on hand goes. And this is a great recipe staple that you can do SO many things with!

Even though you can make pulled pork via many different ways and cooking methods, like in the oven, in the smoker, in the instant pot, or even braised on the stove for several hours, making it in the slow cooker is the easiest method by far. Plus, you won’t be heating up the entire kitchen for several hours like you would if you used the oven.

If you don’t own a slow cooker yet, the one that I purchased was a $17 investment (lol) and has lasted me for 10 years with no problems. It’s one of the cheapest and best kitchen purchases I have ever made. Is it the best slow cooker? Maybe not, but it seems that paying more just gets you more features. Performance should be good with any well-rated crockpot. Plus you can make tons of recipes in them, like Slow Cooker Beef Ragu or Crockpot Buffalo Chicken Dip.

Rest the meat before shredding – Try to let the pork sit for an hour after cooking before you shred it. This will maximize the moisture of your meat. If you shred right away after cooking, the juices won’t have a chance to redistribute evenly back through the roast (even though technically those juices will still be in the pot, it won’t be as evenly moist).

Have a plan for spicing or saucing the meat – When I make Smoked Pork Butt I don’t add a spice rub or sauce, because the point is to taste the applewood. But here, even though it’s the same exact cut, you’ll want to add some flavor because there’s no browning happening. I share suggestions below.

Strain and add the juices back to the meat – By the end of cooking, you’ll notice that the pork will be sitting in its own juices. Do not throw these juices away! I pour the liquid through a strainer and incorporate it back into the meat. If it’s too liquidy for you, I recommend reducing it on the stovetop and still including it. Don’t waste the flavor.

What Cut of Meat to Use

The classic and best cut of meat to use for pulled pork is a pork shoulder, which you may also see named at the store as “pork butt” or “Boston butt.” I prefer a boneless pork shoulder roast that has been tied, but you could do a bone-in pork shoulder as well.

For a leaner pulled pork, you can get away with using the top loin boneless roast, but it won’t be as moist as your typical pulled pork. I have a method below for removing excess fat from the meat that you may find helpful.

Unless you are planning to toss in some BBQ Sauce at the end, I recommend seasoning the pork shoulder. This could be as simple as salt and black pepper, and perhaps some garlic powder, though I absolutely love rubbing on some homemade Sazon Seasoning. You could try any pork-specific rub here.

Another simple flavoring is to cook the pork in pineapple juice, which is a magical flavor combination with this kind of meat. Simply add a small 6-ounce can to the slow cooker along with the other ingredients. Apple juice is another nice complementary choice.

If you want to make the rub slightly sweet without adding liquid, add 2 tablespoons of brown sugar. I have tested this and have never had issues with the sugar burning in the bottom of the slow cooker. You can also try adding 2 tablespoons of worcestershire sauce for extra savory flavor, or 2 tsp of liquid smoke for a smokiness reminiscent of the grill.

Once the meat is rubbed down, the seasoned pork is ready to go into the slow cooker!

Do you need to add liquid?

It is not necessary to add any liquid to the slow cooker, unless you want to. When I do a spice blend, I add no liquid at all. Even if you add a can of pineapple juice, the meat will not be completely covered, and that’s fine. In my testing, I have found that adding chicken broth conflicts a bit too much with the flavor of the pork, so that’s not recommended.

Why I don’t sear the meat

In short: because I don’t think it’s worth the trouble. I’ve tested searing and don’t think it makes a noticeable difference in flavor here. Most of the meat you’ll be eating later is interior, and doesn’t get a sear anyway. I’ve concluded it’s not worth the effort, which is nice because honestly it’s a pain to sear a 4 pound hunk of meat.

How Long to Cook:

Cook the pork butt for 8 hours on low, until the interior reads at least 200F, which will ensure that all of the connective tissue breaks down. I’ve owned a few different brands of slow cookers over the years, and the timing can vary by an hour or two, which is why it’s best to go off temperature. If you don’t have a thermometer, you can grab a fork and see how easily the pork shreds. If it doesn’t seem easily shreddable, it’s not done yet.

Once you’re done cooking, there will be liquid in the crockpot that the meat gave off while cooking. Don’t throw this cooking liquid away! You’ll want to incorporate it into your shredded pork.

Remove the pork to a board and let it rest for at least 20 minutes, but ideally an hour. This allows the interior juices to redistribute evenly throughout the meat, giving you a moister end result.

Once the meat has rested, shred it with a fork. It should yield quite easily to the fork, and fall apart nicely.

Now, collect the remaining liquid from the crockpot in a measuring cup or small bowl. You can see that most of it is pork juice, but there’s a small layer of fat at the top:

Pour the remaining liquid through a strainer all over the pulled meat:

If you don’t mind adding the rendered fat back to the meat, you can just pour the liquid through a strainer all over the pork right after cooking.

For a nice BBQ spread, toss the meat in my sweet, spicy, smoky BBQ Sauce (or your personal favorite barbecue sauce) and serve with a side of Coleslaw, Homemade Cornbread, and Red Potato Salad.

How do you store leftover Slow Cooker Pulled Pork?

Keep in an airtight container in the fridge for up to 1 week.

Can you freeze Pulled Pork?

Yes, it freezes beautifully! Store in an airtight container or freezer bag for up to 3 months.

How do you reheat Pulled Pork?

While you can reheat it in the microwave, I think it tastes best when it’s reheated in a skillet. Add a small amount of fat like neutral olive oil, butter, or lard, and cook the leftover meat for a few minutes until warmed through. If you want to reheat frozen pulled pork, thaw it in the fridge overnight first.

What temperature do you cook Slow Cooker Pulled Pork?

I’ve owned a few slow cookers and all of them have only had two settings: low and high. I always use the low setting. In my opinion, the high heat setting is too aggressive for this cut of meat. If you do high, it still typically takes a minimum of 4 hours.

Yes, definitely. The best way to combat this is to first get a feel for your own slow cooker, since models can vary in heat intensity, and also the size can impact cooking time. If you’re cooking a smaller pork shoulder that’s 3 pounds, you should check the temperature earlier than you would for a 5 pound shoulder. The pork is done when it reaches at least 200F and shreds easily with a fork. Try not to go over 205F. 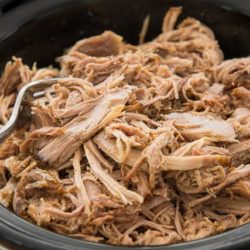 *Different salts vary in “saltiness,” but I do about 1 tablespoon of kosher salt for a 4 to 5lb piece of meat. If you’re using table salt, cut the amount to 2 teaspoons. **I’ve owned a few different brands of slow cookers over the years, and the total timing can vary by an hour or two, which is why it’s best to go off temperature. However, 8 hours is a good starting point for a 4-lb roast. If you don’t have a thermometer, you can grab a fork and see how easily the pork shreds. If it doesn’t seem easily shreddable, it’s not done yet. Storing leftovers: Store in an airtight container in the fridge for up to 1 week. Freezing: Store in an airtight container for up to 3 months. Reheating: While you can reheat it in the microwave, I think it tastes best when it’s reheated in a skillet. Add a small amount of fat like neutral olive oil, butter, or lard, and cook the leftover meat for a few minutes until warmed through. If you want to reheat frozen pulled pork, thaw it in the fridge overnight first.