Roasted Parsnips are simple to make and are incredibly delicious as a vegetable side to any dinner. They have a natural sweetness that caramelizes in the oven for a delicious flavor. They are so good that all we use here are 4 simple ingredients: parsnips, olive oil, salt, and pepper!

I don’t understand how parsnips haven’t gotten their moment of trendiness and hype in the food world. I mean, if brussels sprouts have already had their moment, why not parsnips?

I’d argue that these taste way better. Even my toddler devours these. That’s saying something.

What are they exactly?

Parsnips are a root vegetable in the carrot family. They look like fatter, white carrots. Some people describe the taste of parsnips as like a spicy carrot, but I don’t view them this way.

Parsnips are sweeter than carrots, with a nutty and earthy flavor. I also wouldn’t describe this vegetable as spicy, but rather as “spiced.” As if the vegetable had been seasoned with a combination of warm spices like cinnamon, clove, nutmeg, etc. The flavor is SO delicious.

Today I’m sharing what I think is the best way to prepare parsnips: roasted in a hot oven until they’re golden brown, caramelized, sweet, and tender, all while intensifying the natural sugars and unique flavor of this wonderful root vegetable.

Dry the parsnips thoroughly – Before caramelization and browning can happen, any exterior moisture has to cook off first. So make sure that the parsnip pieces aren’t wet going into the oven, or they will take longer to brown. Dry thoroughly before cutting.

Toss in a mixing bowl, not on the sheet pan – Sometimes I see on cooking shows that they’ll toss roasted vegetables in the oil, salt, and pepper on the sheet pan instead of a bowl. In my experience, this does not distribute and coat the ingredients anywhere near as well as when you use a bowl, which means less consistent browning. Use the bowl!

Take your time to cut even pieces – I will show you below how to cut the pieces uniformly so that they all cook the same. This way you get consistent pieces instead of some burned and some undercooked pieces.

What to look for when buying them

When you’re at the grocery store buying your parsnips, I recommend trying to select the smaller ones, if possible. As is true with most root vegetables, smaller pieces tend to be better for a few reasons:

So if you can help it, try to pick smaller pieces. Most grocery stores usually sell them pre-packaged in bags, so I usually don’t have much choice, but I look among the bags and try to select smaller ones from there.

Do you have to peel them?

You will need to peel parsnips using a vegetable peeler, particularly the large parsnips. The skin is usually fairly tough and woody. If you have some smaller, younger parsnips, you may be able to leave the skin on.

How to Cut Into Even Pieces

Parsnips look annoying to cut into even pieces because the size usually varies hugely from top to bottom, but it’s actually pretty easy. I like to cut the parsnips into matchsticks. Cut each parsnip in half at the middle, to split the larger diameter top part from the thinner bottom part.

Then you can cut the bottom smaller part in half, and the larger tops into thirds or quarters so everything is about the same size and cooks evenly.

You can also cut parsnips into coins, but toward the larger tops of the parsnip, you’ll have to cut them into half-moons or even quarters because it’s so much bigger than the thin bottoms of the parsnip.

How to Cook Them

Once you have the parsnip matchsticks, place them in a large bowl and toss with your oil of choice, salt, and pepper:

You may use any high heat tolerant cooking fat. I personally love the flavor of tallow, lard, and duck fat, but you may also use olive oil or another high heat cooking fat.

Other flavors you can add

Parsnips are so flavorful that I really do love them just with oil, sea salt, and black pepper. This allows the nutty flavor to shine.

But if you’d like, you may try adding 1-2 tbsp of maple syrup or brown sugar, and ground spices like cinnamon, nutmeg, cloves, ginger, and allspice. Some lemon zest grated over the top at the end is also nice.

If you want to add fresh herbs, I recommend stripping a few thyme sprigs before roasting, or adding fresh parsley at the end. You can get more flavor ideas from The Flavor Bible (affiliate), one of my favorite books!

Once coated, distribute the pieces in a single layer on a rimmed baking sheet. I have found that the pieces brown better when not cooked on parchment paper.

Also, do not overcrowd the pan. The pieces should ideally have a little bit of room in the sides so the steam can escape while cooking, thus letting the pieces brown better.

Roast in a 425F preheated oven for about 30 minutes, tossing once throughout, until the parsnips are caramelized and golden brown on the edges, and tender in the middle:

How to Serve Them

Roasted Cauliflower and Roasted Sweet Potatoes are some of my other favorite simple veggie sides. Like this easy recipe, they are naturally paleo, gluten free, whole30, and suited to toddler eating too.

How do you store leftover roasted parsnips?

How do you reheat roasted parsnips?

I think the microwave is easiest. Heat portions in 15 second intervals until warmed through. You may also reheat them in a 300F oven for about 10 minutes, until warm.

Can you freeze leftover roasted parsnips?

Since these have already been cooked, they actually freeze decently well. Store in an airtight container for up to 2 months. To reheat, first thaw in the fridge overnight.

Can you roast parsnips in advance?

Yes, these re-heat well. Toss in another tablespoon of olive oil or butter, then heat in a dish in a 300F oven for about 10 minutes, or until warmed through. 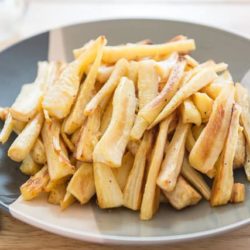 Servings: 6
Prep Time: 15 mins
Cook Time: 30 mins
Total Time: 45 mins
Roasted Parsnips are simple to make and incredibly delicious as a vegetable side to any dinner. They have a natural sweetness that caramelizes in the oven for a delicious flavor.
Print Recipe Pin Recipe
21
reviews
Leave a Review »

*I also love the flavors of tallow, lard, and duck fat. You may use any high heat cooking fat here. **Note on cooking times: The exact time varies depending on how big the matchsticks are, so make sure to check on them once in a while to see if they’ve become caramelized and fork tender. That’s when you know they’re done. How to store: Keep in an airtight container in the fridge for 5 days.  Freezing: Store in an airtight container for up to 2 months. To reheat, first thaw overnight in the fridge. Reheating: I think the microwave is easiest. Heat portions in 15 second intervals until warmed through. You may also reheat them in a 300F oven for about 10 minutes, until warm. Roasting in advance: These reheat well. Toss in another tablespoon of olive oil or butter, then heat in a dish in a 300F oven for about 10 minutes, or until warmed through.