Home » Recipes » Breakfast and Brunch » How to Properly Poach an Egg

How to Properly Poach an Egg 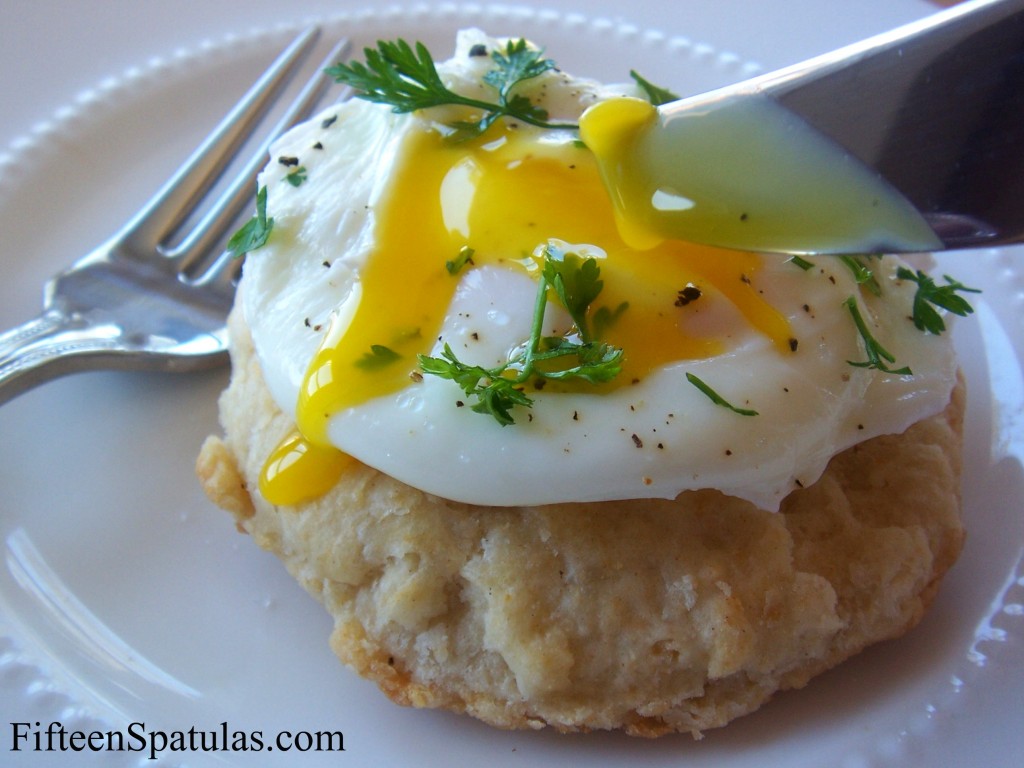 Sadly, like eating well done steak, I ate chalky egg yolks for all my life.  I never knew how awesome poached eggs were until I had them at my friend Anna’s house a few weeks ago.  Perfectly cooked, the egg white should be solid and the egg yolk warmed through enough to roll down in a thick rich stream.  And really, I don’t know why poaching eggs is considered a difficult task (I always assumed it was before I tried.  It has such a reputation)!   It’s probably because there are various known methods of poaching an egg, and two of them yield poor results.  I have tested all three, and have made my conclusion as to which one is the best:

Before we go over the poaching methods, here are a few steps to poaching success, no matter which method you use:

-Use a fresh egg.  If you use an older egg, all the different parts will have a harder time staying together.

-Crack the egg onto a small plate, then when you’re ready to poach the egg, hold the lip of the plate as close as you can to the water, and let it gently slip in.

-Always bring your water to a boil, then reduce to a steady simmer.  Then proceed with poaching your egg.

-When boiling anything, it’s important to use enough boiling water.  When you stick pasta in boiling water, do you notice that it stops boiling for a minute, and then needs another minute to come back up to a boil?  When you add a bunch of mass (that isn’t hot) to boiling water, it significantly cools down that water.  It’s the same with poaching an egg.  Your cold egg will cool the boiling water too much if there isn’t enough of it.  Use a pot big enough to hold lots of boiling water so the boiling water will always win against the egg.  I use a deep saucepan with at least 3 inches of water.

The first method I tried is the vortex method.  Basically, before you slip the egg in, you swirl the water around into a vortex.  Here’s how that one turned out: 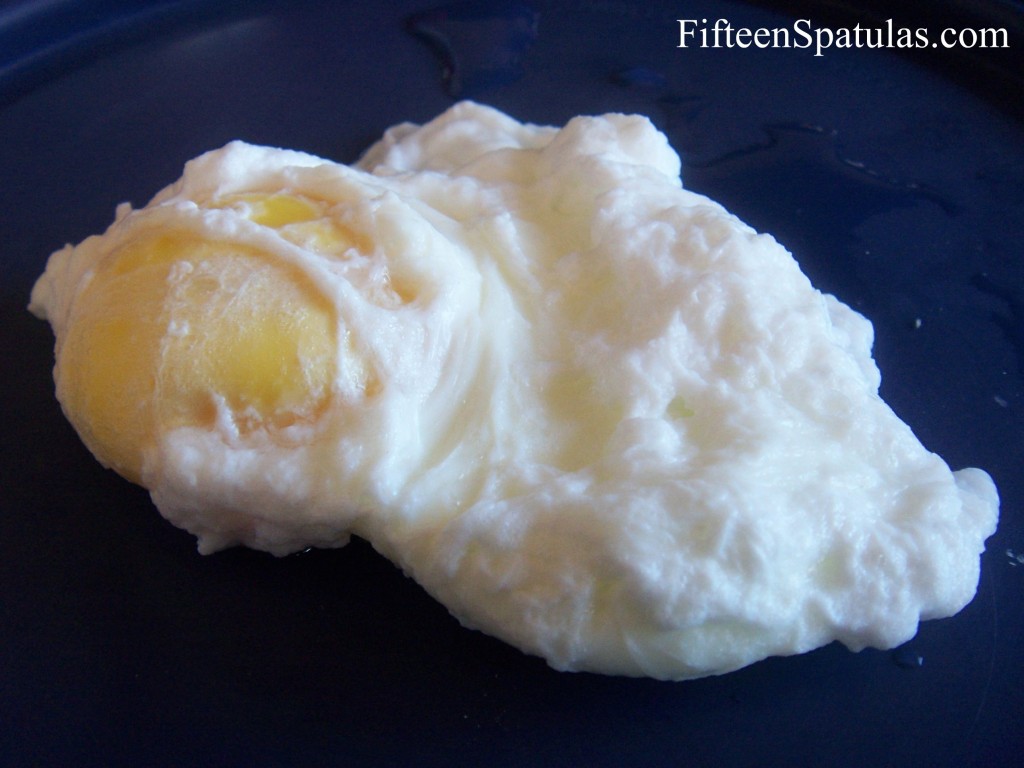 FAIL.  It looks like an egg shooting star…except it’s not pretty.  Yolk all to the side, with a bunch of streaming egg white mess coming out of it.

The second method I tried (and the one I have always done) is just slipping the egg in to the simmering water, no vortex.  It turned out beautifully: 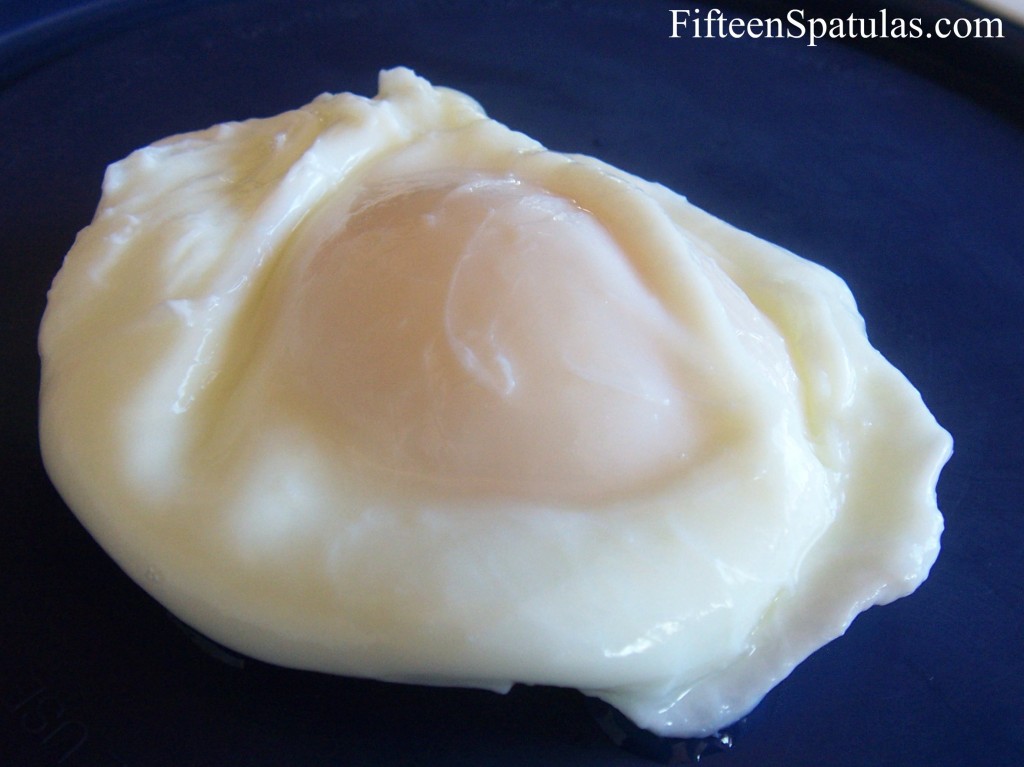 Success!  Visible yolk, very even egg white, no whispy strands.  Perfect.  The only egg allowed to sit on top of my glorious biscuit.

The third method I tried is adding a splash of white vinegar to the water.  The idea is to help coagulate the egg when it hits the water.  Here’s what that looked like: 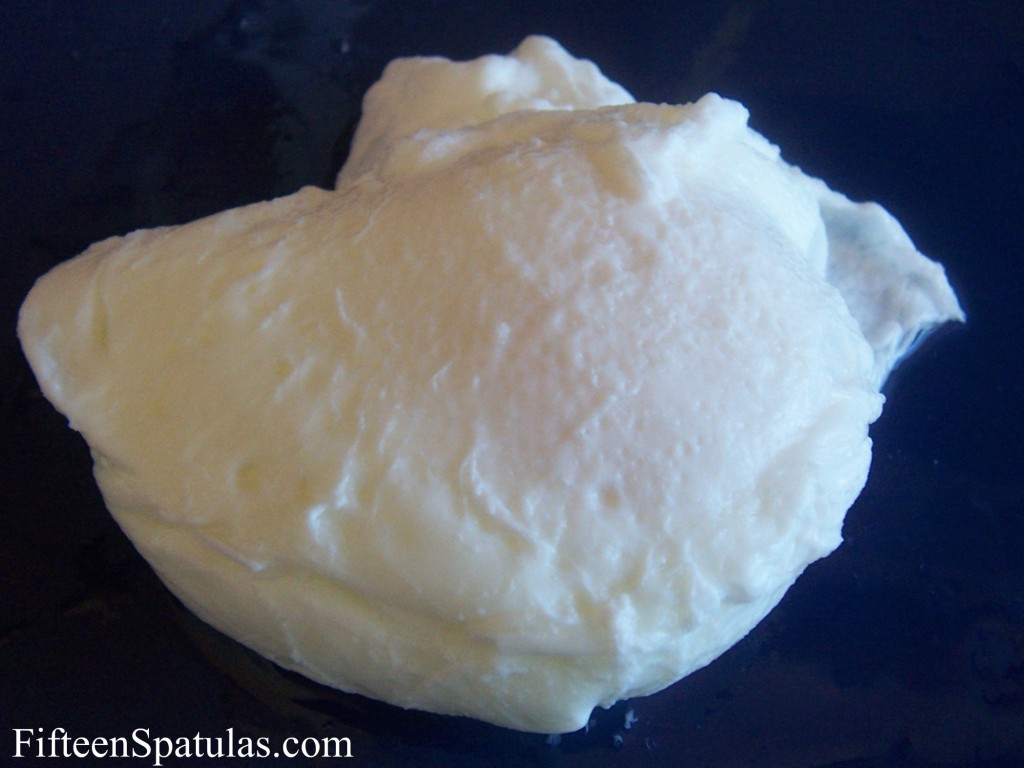 Eh, fail, but not as much as the first method.  It’s just not as good as using plain water, so why waste the vinegar?  You can barely see the yolk.  But it’s not an awful poached egg.

The verdict: The simplest method wins (#2). Isn’t it funny that these things always seem to come back to the simplest way?

Now that we know what method to use, how long should you cook the egg?  I always set my timer for exactly 2 minutes in simmering water.  I find that to be the perfect amount of time to cook the egg white completely, and warm the egg yolk through.

Now you can go make poached eggs like a master!  I let mine sit atop one of my Golden Crusted Fluffy Biscuits and garnish with chervil (a delicate herb, that goes beautifully with eggs) and some salt and pepper.  The perfect breakfast! 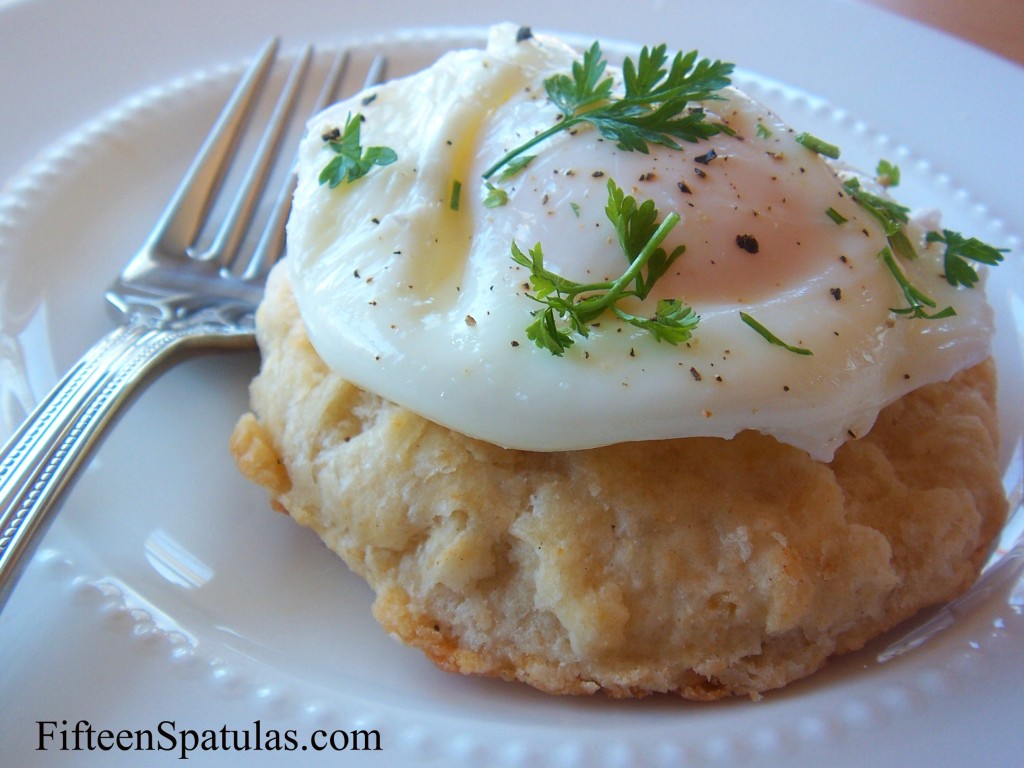