Carrot Cake Pancakes are a fun treat for a special brunch! The pancakes have carrots, spices, and walnuts in them, and are topped with a cream cheese glaze. 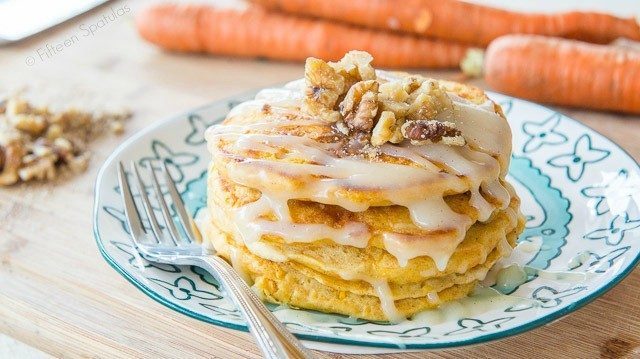 When I was younger I used to eat those yogurts that came in every flavor under the sun, and frequently bought the Key Lime Pie yogurt, the Boston Cream Pie yogurt, Strawberry Cheesecake, and so on.

It’s kind of funny because the yogurt was honestly pretty bad and didn’t really taste like the Key Lime Pie flavor it was claiming to be, but I think there’s something appealing about enjoying a recipe we love in a completely different form.

Case in point, I spent last weekend testing out and making Root Beer Float Marshmallows, and Blueberries & Cream Marshmallows. Because when you bite into a homemade marshmallow and it reminds you of a root beer float, there’s just something fun about that! I love that kind of food.

After updating the Cinnamon Roll Pancakes recipe a couple months back, I decided that I wanted make some Carrot Cake themed pancakes next. And I might like these even more! They have grated carrots and warm spices in the pancake batter, plus crunchy walnuts, and a cream cheese glaze on top. The first time Pete took a bite, he literally asked me if it tasted TOO much like carrot cake. Which I, of course, took as a compliment. Because what on earth does that even mean!? These pancakes are good, and I hope you try them out for brunch sometime! 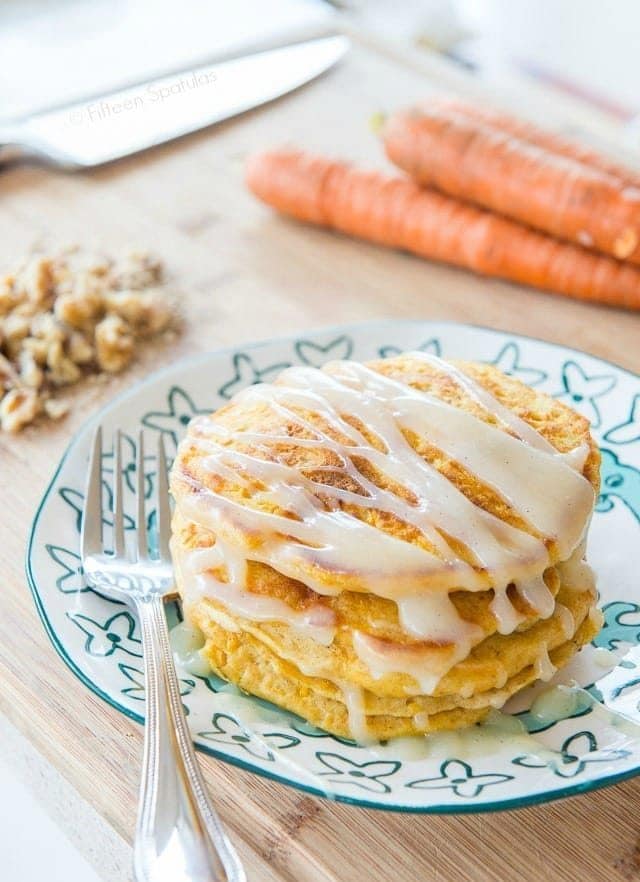 To get started, grate a large carrot using a fine grater: 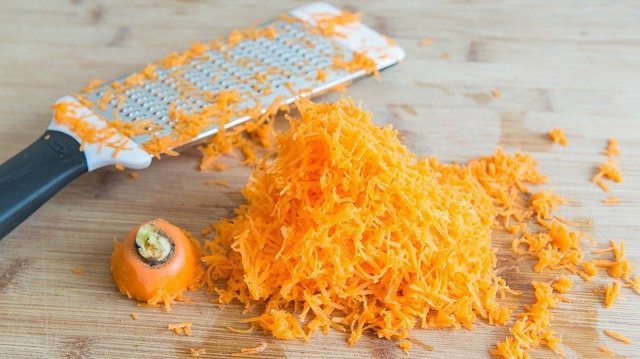 It’s important that the carrots are in fine pieces, so they can cook quickly and aren’t crunchy in the pancakes.

Next, assemble the dry ingredients, which is flour, baking powder, salt, cinnamon, nutmeg, and ginger: 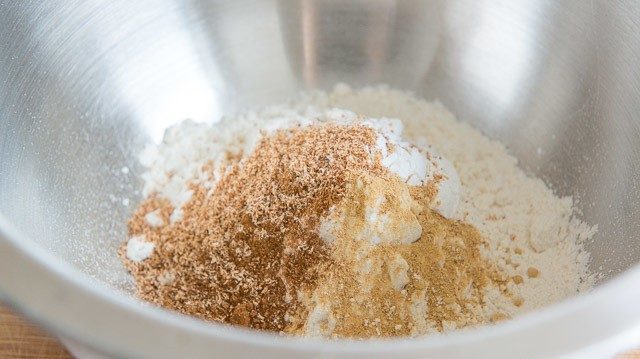 For the wet ingredients, combine buttermilk, grapeseed oil, and one egg: 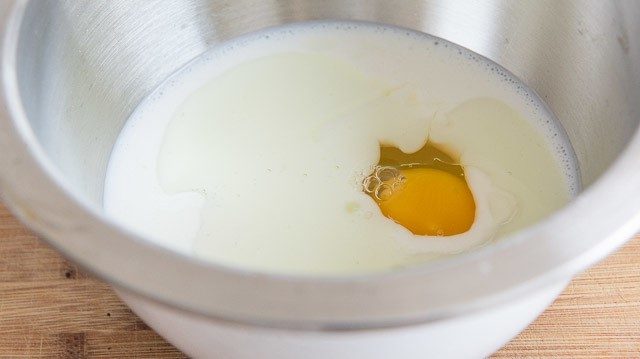 Add the wet ingredients to the dry: 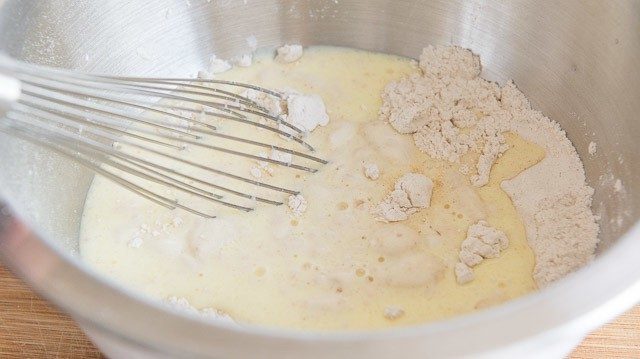 When the flour has almost been mixed in, add the grated carrots and chopped walnuts: 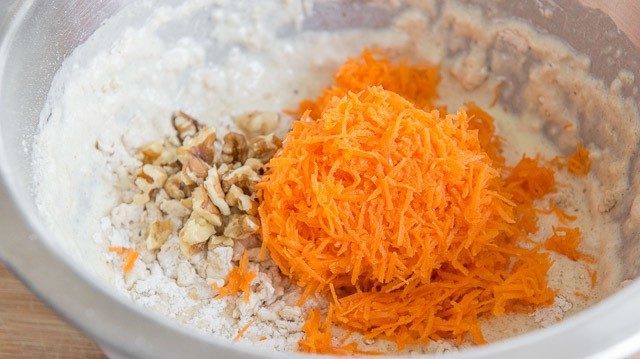 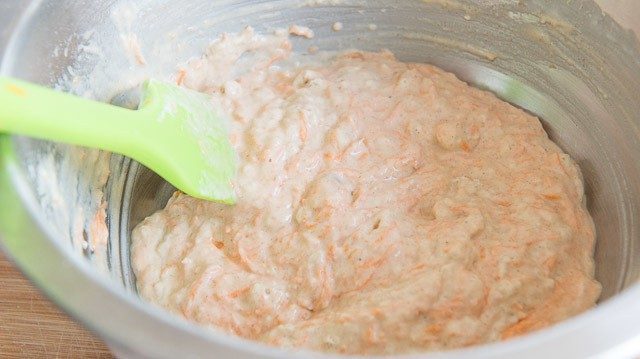 Place medium scoops of the batter in a nonstick skillet and cook the pancakes for a couple minutes on each side: 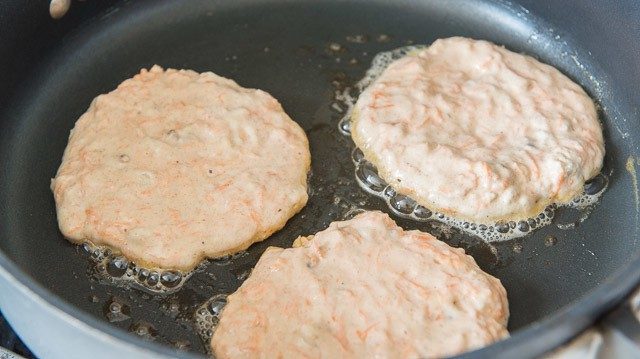 Then top with the same cream cheese glaze as the Cinnamon Roll Pancakes, plus walnuts!

Here’s a full video on how to make the pancakes, and the recipe is below.

And one thing I’ll say, is you’ll notice there’s no sugar in the actual pancake batter, because the cream cheese glaze is so sweet. With that said, make sure to eat them together. Otherwise, add a couple tablespoons of sugar to the pancake batter. Enjoy!

You can freeze the pancakes, but not the icing. 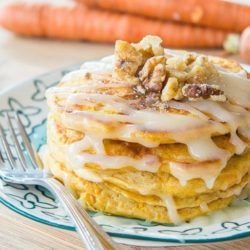 *If you’re using cold butter straight from the fridge, microwave the butter separately, otherwise the cream cheese will overcook in the microwave before the butter is melted.

posted in: All Recent Posts, Breakfast and Brunch 6 comments