This Roasted Pork Tenderloin is an easy way to prepare a lean protein for dinner that’s flavorful and pairs well with many different sides like Maple Glazed Carrots and Crispy Smashed Potatoes. It’s perfectly seared on the outside, but tender inside. It only takes 20 minutes to cook!

Anytime I see pork tenderloin on sale at the store, I always snatch it up. It’s such an easy meat to cook as the focal point of any dinner. While the tenderloin cut has gotten a little more expensive over the past 5 years, it’s still a relatively affordable cut of meat. Especially considering it’s trimmed up already, and there’s no excess fat to cut away. What you get and cook is pretty much all lean protein that can be sliced and served.

Just as with Beef Tenderloin, this is a really lean cut, but unlike Pork Chops, it’s relatively tender since it’s not a heavily used muscle. Because it’s so lean, I like to flavor it with a marinade or seasoning blend, which I’ll go over further below.

Sear it first, then pop it into the oven – While you could technically skip the searing, having that caramelized and browned exterior makes the end result taste so much better. You can make the process really easy and fluid by searing the meat in an oven-proof skillet, then popping that into the oven so you don’t even have to transfer it to a tray.

Marinate or rub the meat – Because there’s not a lot of fat in this cut, it’s not the best piece of meat to just have salt and pepper. If you have time, you can marinate the meat, or if you want to keep it fast, you can rub it with a few spices (suggestions below).

Use a thermometer – There’s quite a lot of variation in size of pork tenderloins that you buy at the grocery store, so it’s really not a great idea to rely on timing alone. Use an instant read thermometer to check the internal temperature, so you’re not eating overcooked meat.

Let the tenderloins rest for 5 to 10 minutes – After cooking, it’s important to let the meat rest for at least 5 minutes, to minimize the juices running out of the meat during slicing. The meat will also warm up about 5 degrees more with carryover cooking.

One really nice thing about roasted pork tenderloin is how well it goes with many different types of sides and dishes, and I do recommend more elaborate sides for this protein. I love serving it with Greek Zucchini Salad, but this Mediterranean Quinoa Salad goes really well with it too.

Take the Chill Off If You Can

While it’s totally okay to cook the pork tenderloin straight cold from the fridge, for extra juicy pork, take the meat out of the fridge 30-60 minutes before cooking and let it warm up on the counter.

Less cooking means less of a chance for drying out, and even juicier meat. I follow this same protocol with meats like Grilled Ribeye and whole roasted chickens like Peruvian Chicken. It makes a noticeable difference.

This first step is optional, but I like to flavor the meat with a marinade or spice rub. While you can do just kosher salt and black pepper, this is such a lean cut of meat that it really needs some sort of flavor.

This popular Pork Tenderloin Marinade recipe on my blog has olive oil, lemon juice and lemon zest, garlic, rosemary, and Dijon mustard, and I highly recommend it if you don’t already have a marinade in mind. Soy sauce, balsamic vinegar, and brown sugar based marinades also pair nicely with roasted pork tenderloins.

If I don’t have the time to marinade, I’ll at least rub on some Sazon Seasoning, which goes beautifully with pork. I’ve also enjoyed Cajun Seasoning and Fajita Seasoning. Fresh herbs like chopped rosemary or thyme leaves are also lovely.

The tenderloins I buy are already trimmed of any silver skin by the butcher, but if you see any on there, make sure to trim it off with a sharp knife before marinating or rubbing the meat.

To cook the tenderloin, heat a large ovenproof skillet over medium high heat, such as a cast iron or stainless steel pan. Pat the outside of the pork dry with a paper towel to remove excess moisture, then sear all over for about 3 minutes total, until golden brown:

While you could technically skip this step and just throw the tenderloins in a hot oven, that would make it look a bit pale on the outside. The searing also helps develop flavor and caramelization that tastes really delicious.

After searing, place the entire skillet into the oven. The pork will receive heat from the hot air circulating around, plus it will keep searing from the heat of the skillet. For that reason, I recommend flipping each tenderloin over about halfway through the oven roasting period to keep things even.

How Long to Roast the Meat

For the standard 1-lb or 1.25lb piece of pork tenderloin, I usually recommend no more than 10-15 minutes in a 450 degrees F oven. A high temperature roast encourages extra browning on the outside, so do not lower the temperature. You want the interior temperature to reach 140F, checked with an instant-read thermometer in the thickest part of the meat.

A thermometer (affiliate) is essential for making pork tenderloin, as it’s more difficult than other cuts of meat to go by feel. Since there’s such little fat in the meat, there’s little wiggle room for overcooking. You can get a good meat thermometer for $10. I use mine all the time because I don’t like risking overcooked meat.

Once the pork has reached the target temperature of 140F, remove it to a plate and let it sit for 5 to 10 minutes. During this time, the meat will continue cooking another 5 degrees or so, and the juices will get a chance to redistribute.

After the meat has rested, cut the pork into slices, and plate as you’d like. I like to collect any of the juices from the board and put them into a little bowl on the side for dipping. There’s so much flavor there that you don’t want to go to waste!

Quinoa Cakes, Zucchini Ribbon Salad, and White Bean Salad are some great fresh sides that pair nicely here and always get rave reviews from my family. You could also try roasted vegetables like Roasted Parsnips, Roasted Brussels Sprouts, or this Charred Broccoli.

Slow Cooker Pulled Pork is another one of my staple pork recipes in the house for mealtime. Next time, you can also try Carnitas or my succulent Oven BBQ Pork Spare Ribs. Enjoy!

Can pork tenderloin be pink inside?

Yes, the recommended doneness for pork is 145F, which will have pink inside. We pull the pork from the oven at 140F, and the meat continues to cook another 5 degrees, so it’s perfectly done.

How do you store leftover roasted pork tenderloin?

Yes, it can be stored in an airtight container in the freezer for up to 3 months. To thaw, I recommend placing in the fridge overnight, since if you reheat it from frozen, it will tend to overcook the meat.

How do you reheat leftover roasted pork tenderloin?

The two best methods are in the microwave or the oven. For best results, I recommend not reheating straight from frozen, but thawing any frozen pork in the fridge overnight. For the microwave, cover the meat and microwave in 30 second intervals on 70% power, until warmed through. Timing will depend on how much you’re heating, but one serving (6 ounces) should take about 1 minute. Covering the meat with an inverted bowl or cover will heat the meat more evenly and prevent drying out. Or, you can reheat pork in a 300F oven for about 10-15 minutes. I recommend wrapping it in foil, to prevent drying out.

Will this pork shred?

No, this is not the right cut to use for shredding. You want the shoulder cut for that like in this Pulled Pork recipe. 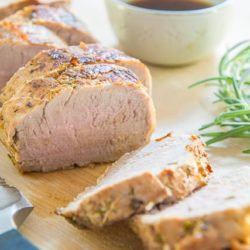 *I find that nearly all grocery stores sell pork tenderloin that is already trimmed, with silver skin removed. However, if you see any, remove it with a sharp knife before cooking.  Storing leftovers: Keep in an airtight container in the fridge for up to 5 days. Freezing: Store in an airtight container in the freezer for up to 3 months. To thaw, I recommend placing in the fridge overnight, since if you reheat it from frozen, it will tend to overcook the meat. Reheating: The two best methods are in the microwave or the oven. For best results, I recommend not reheating straight from frozen, but thawing any frozen pork in the fridge overnight. For the microwave, cover the meat and microwave in 30 second intervals on 70% power, until warmed through. Timing will depend on how much you’re heating, but one serving (6 ounces) should take about 1 minute. Covering the meat with an inverted bowl or cover will heat the meat more evenly and prevent drying out. Or, you can reheat pork in a 300F oven for about 10-15 minutes. I recommend wrapping it in foil, to prevent drying out.