For this classic Bread Pudding, challah bread is soaked in a rich custard spiked with spiced rum and vanilla, and baked until golden. It’s a great make-ahead dessert, and wonderful with ice cream!

Bread pudding is proof that some of the most delicious things are also the easiest. 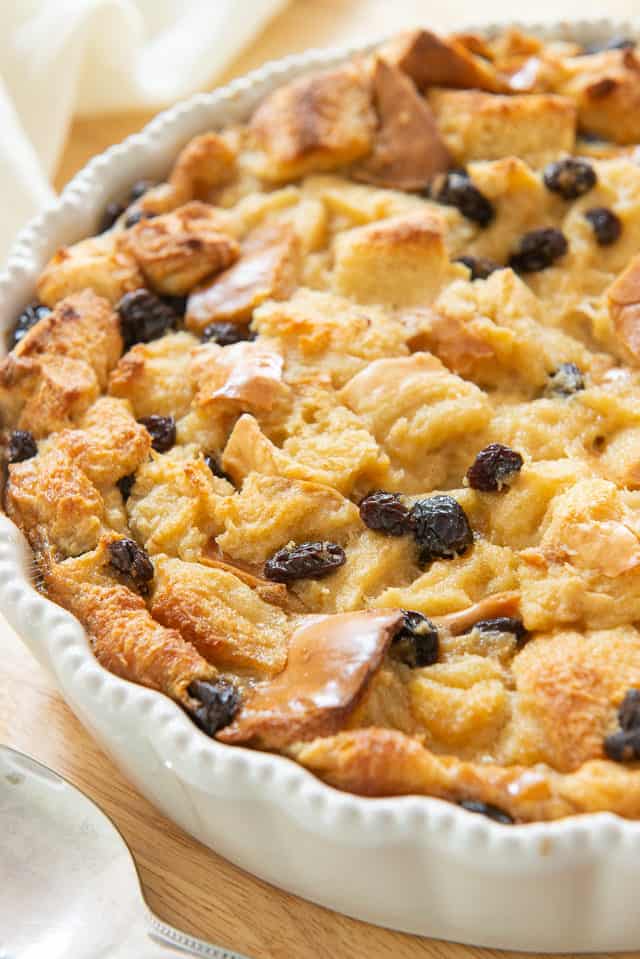 Like Creme Brulee, bread pudding is a dessert that anyone can pull off. Heck, my toddler could probably make it.

Because it’s so easy and so deliciously comforting, it’s a good option to make for many occasions, whether it’s the holidays, or a special weekend dinner.

My little brother is obsessed with bread pudding, and has requested we make it for every holiday and any other excuse that could possibly suffice.

In other words: we’ve tried bread puddings of all kinds.

I’ve made chocolate bread pudding, fruity bread puddings, and have experimented with various breads and flavorings in the custard. 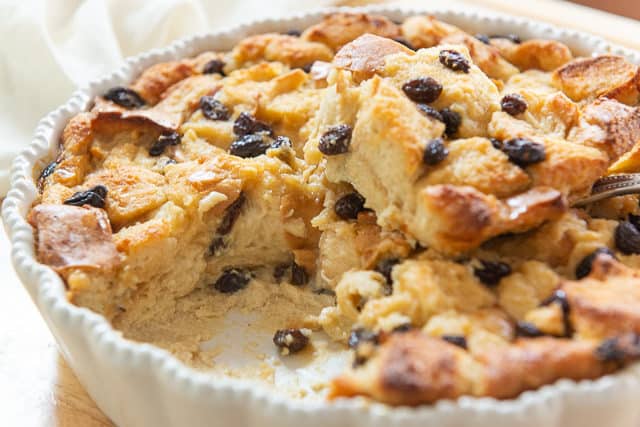 But this is my favorite version of all.

It’s pretty classic, and is flavored with a subtle spiced rum and raisin combination.

I like challah here since it’s easy to find (TJ’s has a great price on it), has a slightly sweet flavor, and a light and fluffy texture.

However, you could also use brioche or cinnamon bread.

How to Make Bread Pudding:

For a proper bread pudding, you need to stale the bread first, so the bread can absorb the custard.

I usually do this by cutting the bread into cubes, then leaving it out overnight, uncovered. 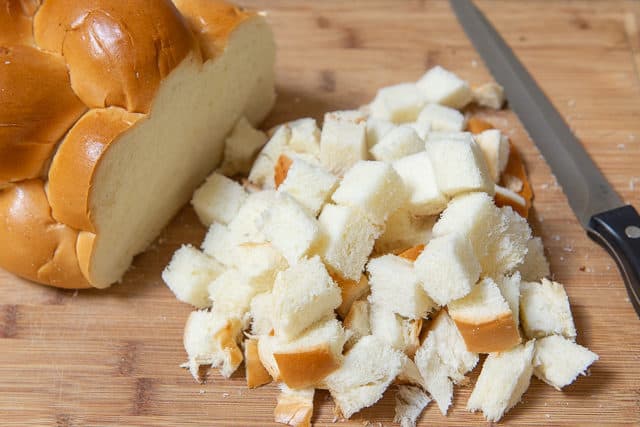 If you’re in a hurry, you can also bake the bread in a 300F oven for about 10 minutes, to dry out the bread. 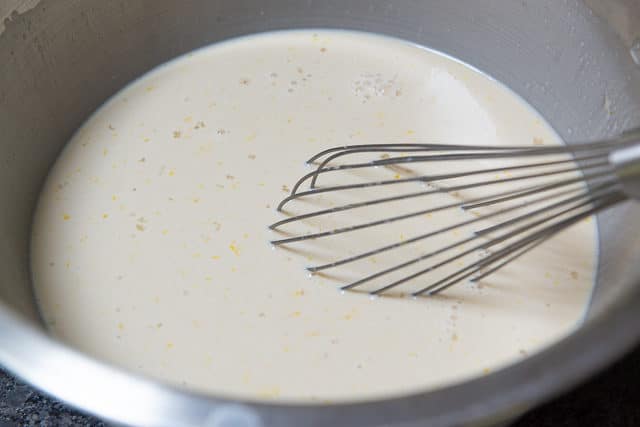 Toss the bread into the custard, and also add some dried raisins: 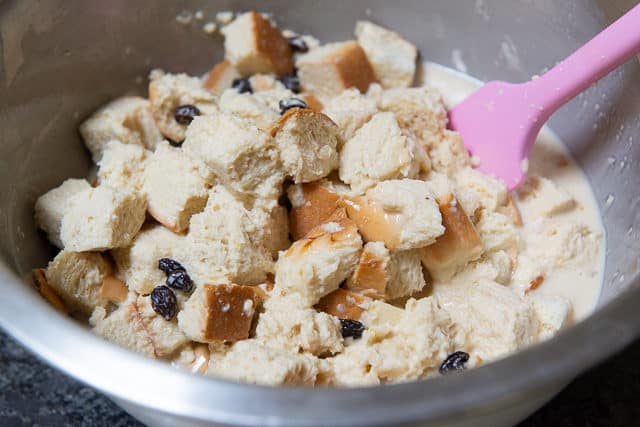 Let the bread sit in the custard for 15 minutes, to gently absorb the liquid, and toss very gently when redistributing the bread.

Pour the bread mixture into a baking dish: 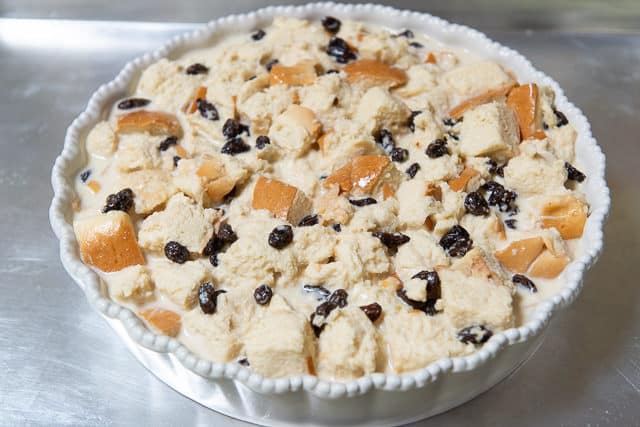 I’m technically using a 10″ diameter quiche dish (affiliate) because I think it’s pretty, but pretty much any baking vessel can be used.

You can bake in individual ramekins for single-serving portions, or bake it all in an 8×8 dish. Just make sure you keep your eye on it, and bake for less time in the single serving dishes.

Bake the bread pudding for just under an hour, until it still glistens in the center, but has crusty, golden edges on top. 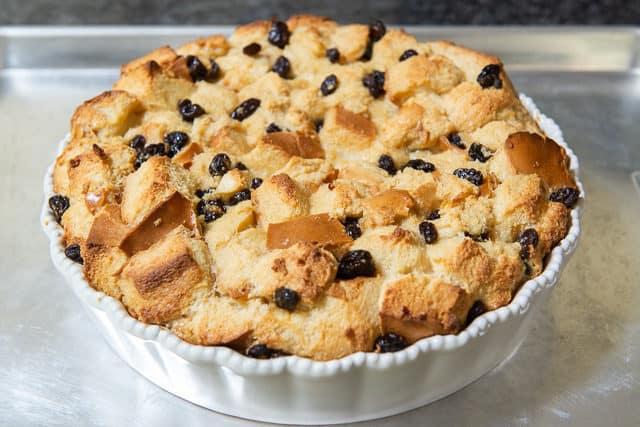 As the dish cools, it will “deflate” slightly and settle down further: 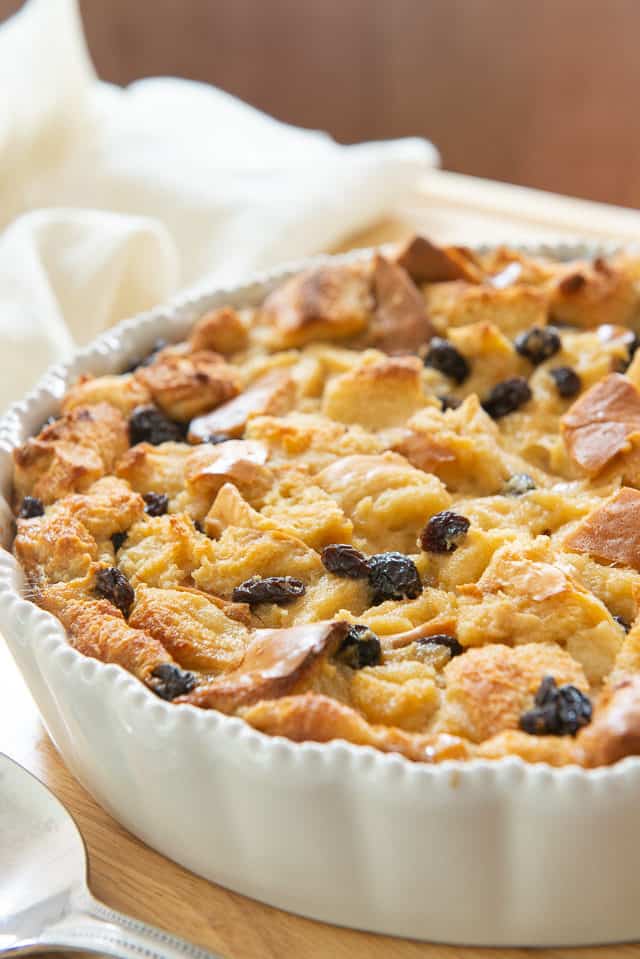 The raisins should now be juicy and plump, and the bread and custard will have combined into a new texture that’s creamy and rich.

Baklava and Peanut Butter Pie are some of my favorite make-ahead desserts for special occasions. Enjoy!

How to Store Bread Pudding: This keeps best in the fridge for up to 5 days, but it can also be frozen.

Can Bread Pudding be frozen? Yes, for up to 2 months. 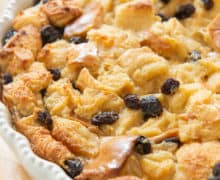 *This is about half of a 20-ounce loaf. I buy mine at TJ's. You can also use brioche. **Large and extra large both work. ***You can also bake in individual ramekins, but reduce baking time drastically, and start checking after 30 minutes.  You can also do a 10" quiche dish.