This Smoked Pork Butt shreds like a dream into the most flavorful and juicy pulled pork. It incorporates methods from legendary BBQ master Aaron Franklin, and is truly delicious enough to eat on its own, or in sandwiches. It’s also one of the simplest meats you can make on the smoker.

Smoked meat is the best meat, and oh my heavens this smoked pork butt is SOOOOO good. Serve it with a side of Coleslaw, Creamed Corn or Cornbread and you truly have an epic BBQ feast.

This is a recipe that I’ve wanted to share with you for ages, and one that I started working on after watching Aaron Franklin’s Masterclass last summer. Yes, I’m talking Aaron Franklin of the legendary Franklin BBQ restaurant in Austin, Texas. I’ve tasted the greatness of his BBQ and I’m grateful to him for sharing all his secrets.

Smoking is always a low and slow cooking endeavor, but the reward today for you is the most incredible shreddable and juicy meat with a hint of smokiness.

Why This Recipe Is The Best

The meat is the star – While I can appreciate that there’s a time and place for fancy meat rubs and BBQ sauce, a lot of times people use those to cover up an inferior smoked meat. This recipe is all about a dang good piece of pork that is smoked perfectly. No sauce is used (though you can add it at the table, if you like), and the seasoning is simply salt, pepper, and paprika.

Great smoke flavor – The pork butt spends hours in the smoker unwrapped to get a hearty dose of smoke penetrating the outside.

Juicy, tender meat – There are several tricks here that will ensure you don’t end up with dry pork. The meat is so juicy and shreds beautifully.

Minimal fuss – I smoke various cuts of meat all the time, like ribs and brisket, and this is arguably the easiest cut to make. It’s great for beginners!

Use the right wood – Certain types of wood are more compatible here than others. My top recommendations for pork are Cherry, Pecan, and Apple woods.

Use a bone-in pork butt – You really want a bone-in pork butt here. Boneless butts will have a more uneven shape, which may result in less uniform cooking. Cooking meat on the bone also improves the flavor, moisture, and handling during cooking. The bone will slide out easily at the end, so don’t worry about it.

Wrap and spritz – Some people say they prefer not to wrap the meat at all because they like a crispy exterior. In my experience, it’s not the kind of crispy I like, as it can become very dry. Wrapping the meat will also help you get through the stall in temperature (more below) and keep the fat and juices inside the foil.

This is a simple, sauceless preparation of pork, though you could certainly serve it with some BBQ Sauce if you prefer. The pork butt is rubbed with mustard, covered with a salt, pepper, and paprika mix, then cooked low and slow for hours until tender.

While Aaron uses a different kind of smoker than I do, I was able to adapt most of the principles and cook this in my Traeger. So long as you follow the temperatures given, I’m sure you could make this in any smoker setup that you have.

How much meat do you need?

To get the number of people the pork butt will serve, I assume 1 person is served per every pound of raw meat. So here I’ll be cooking an 8lb pork butt, which should serve about 8 people. This is on the generous side, but I find that people love this so much that they might eat more than a “normal serving” of meat.

To get started, rub yellow mustard all over an 8lb bone-in pork shoulder butt roast:

The mustard probably sounds weird, but this is one of the fantastic tips Aaron gives in his class. You don’t really taste it at the end, and it helps the seasoning stick to the meat.

Sprinkle On the Seasoning

Next, mix together salt, pepper, and paprika in a shaker and shake it all over the outside:

Aaron emphasizes that you really want to coat it generously, because the meat in the center isn’t going to have any seasoning. So you almost have to overseason the outside.

Get the Meat On The Smoker

Place the pork butt on the smoker, and make sure to add a pan full of water to the grate.

This was one of Aaron’s tips from the class and WOW does it make a difference. I’ve smoked a lot of meats now, and there was one time when I forgot to put the water in and the end result was a lot drier.

Smoke the pork for 3 hours, undisturbed, at which point it should look like this:

Spritz the meat with water or apple cider vinegar, and keep cooking for 3 more hours, spritzing at every 1 hour interval:

Why Do You Spritz The Meat?

Before I started smoking meats regularly, I had heard the idea of spritzing meat with water, but didn’t understand what it was for. Spritzing cools the outside of the meat down so that it doesn’t overcook and dry out. It’s another technique that makes a huge difference in the end.

After the second three hour period, check the temperature of the pork using a thermometer (affiliate). It should ideally be around 165 and you may notice the fat cap on top has split.

It’s time to pull the pork butt off and wrap it in foil.

Aaron recommends spritzing the foil thoroughly and spritzing the meat one more time before wrapping it up. Make sure to use a generous amount of foil and really wrap it tightly:

Keep cooking the pork for another hour, increasing the temperature slightly, at which point it should get to the final target temperature of above 200F. If you pick it up with mitts, everything should feel like pretty tender, but I like to check with a thermometer too. I usually prefer to take it closer to 204F.

Unfortunately, it’s not time to eat yet. It’s important to let the meat rest, for about one hour, in the foil. This is a good time to get your sides together, whether it’s Coleslaw or my Cornbread Recipe or some Crispy Smashed Potatoes.

Once the smoked pork butt has rested, shred it up with a fork, tossing it with any of the rendered fat that was captured in the foil.

The flavor here is so glorious that I do not add sauce or anything else to the smoked pork. To me, doing so would mask the flavor you worked so hard for. I will usually just serve the meat shredded on the plate, with some complimentary sides like Homemade Cornbread, Coleslaw, or Corn Avocado Black Bean Salad.

You can also put it into sandwiches like Pulled Pork Sandwiches, make Pulled Pork Bruschetta with Caramelized Onions and Mozzarella with it, or press it into a panini.

Slow Cooker Pulled Pork is another great recipe if it’s too cold to get the smoker out. I also love my Oven BBQ Pork Spare Ribs and Parmesan Crusted Pork Chops. Enjoy!

These names are used somewhat interchangeably, probably because they both come from the shoulder. However, pork butt is cut from higher up. The Smoked Pork Butt is not actually the rear of the pig.

How do you store smoked pork butt leftovers and for how long?

This is at its absolute peak when eaten fresh, but I almost always have leftovers because it’s a big piece of meat. I recommend shredding the meat while it’s warm because it’s much easier than trying to shred cold meat later. Store in an airtight container for up to 5 days.

Can you freeze smoked pork butt?

The meat will freeze beautifully in an airtight container for up to 2 months. Before reheating, thaw by moving it to the refrigerator the night before.

How do you reheat smoked pork butt leftovers?

I like to fry it up in a skillet on the stove so it’s moist but also crispy. I recommend adding a tablespoon or two of lard first, so the meat doesn’t dry out. The heat time will depend on how much you’re cooking and the size of your skillet. If heating a 6-ounce portion, cook over medium high heat with 1 tbsp of lard for about 3 minutes, until warmed through and browned.

Should you use bone-in or boneless pork butt?

Aaron recommends bone-in and I agree. I tend to almost always prefer bone-in meat, and boneless pork butt can have an uneven shape that will affect cooking.

Why do you spritz the pork while it’s smoking?

Spritzing cools the outside of the meat down so that it doesn’t overcook and dry out. 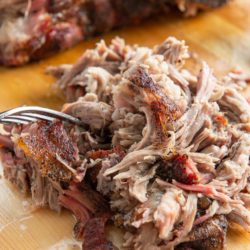 *This is a method from Aaron’s class. Get an empty spice shaker, and combine equal parts kosher salt and coarsely ground black pepper. Then he adds a small amount of paprika for color. You need about 1/3 cup of seasoning for an 8lb piece, so do half of that as salt, half as pepper, and add an additional tablespoon of paprika. Shake it up well and it’s ready to use. **I don’t find much of a difference in flavor with the apple cider vinegar (it is slightly better). I prefer to use water.  Timing may vary depending on the size of the pork butt you buy and the precision of your smoker. If doing a larger pork butt like 9 or 10lbs, you may need an additional hour of 275F cooking. Do not proceed to the final hour of 300F cooking until the meat is at least 160F. Storing leftovers: Store in an airtight container in the fridge for up to 5 days. Freezing: Store in an airtight container for up to 2 months. Before reheating, thaw by moving the container to the fridge the night before serving again. Reheating: I like to fry the leftovers up in a skillet on the stove so it’s moist but also crispy. I recommend adding a tablespoon or two of lard first, to keep things from drying out. The heat time will depend on how much you’re cooking and the size of your skillet. If heating a 6-ounce portion, cook over medium high heat with 1 tbsp of lard for about 3 minutes, until warmed through and browned.