This Potato Hash is a party of flavor, with caramelized leeks, crispy bacon, and sautéed baby bella mushrooms. It’s the perfect savory staple on any breakfast plate!

These are truly some of the best and most compatible ingredients, all together in one skillet. 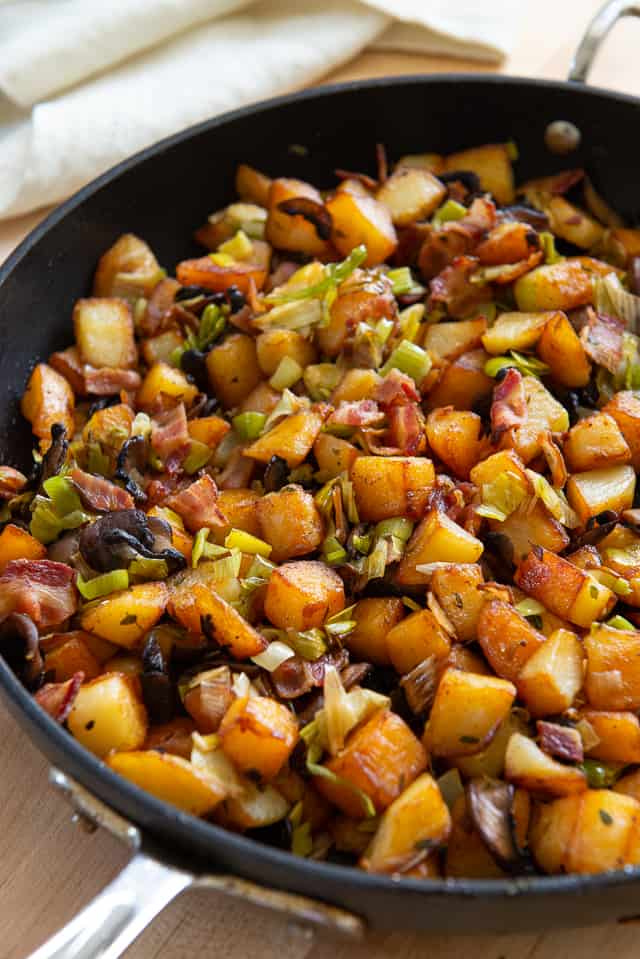 I’ve been making this recipe regularly since I first posted it in 2011, and have never tired of it.

Every ingredient here has a major flavor affinity and compatibility with another, so there’s a harmoniousness to every bite.

Leek + Potato is the base for the classic vichyssoise soup, while Bacon + Mushrooms is another combination that’s piled on top of burgers, baked potatoes, and more.

Everything here jibes with each other. 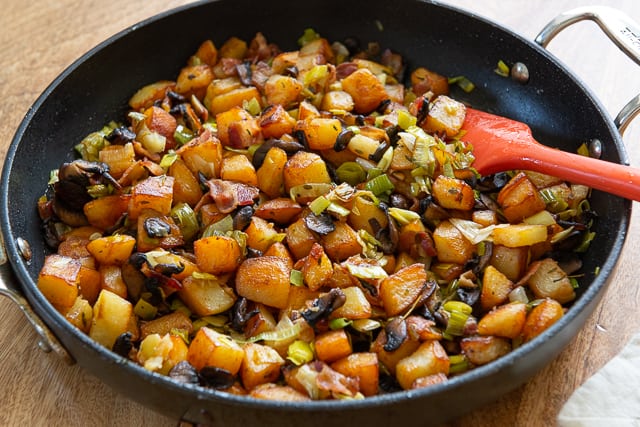 The ingredients needed are all pretty mainstream, except for maybe the leeks.

If you haven’t cooked much with leeks before, get ready to fall in love.

The typical story told of leeks is that they are part of the onion family, which is true, but that doesn’t capture their nature. They are far more delicious than a conventional onion.

I will happily devour a bowl of sautéed leeks (and have done so). I can’t say the same about sautéed onions. Leeks are just crazy good. And they really bring the hash together, so don’t skip them.

How to Make Potato Hash:

Let’s start with the bacon.

Often times I make bacon in the oven (see: How to Cook Bacon in the Oven), but we need the bacon fat here to cook our hash.

So fry some bacon strips in a nonstick skillet until the bacon is crispy and the fat has rendered: 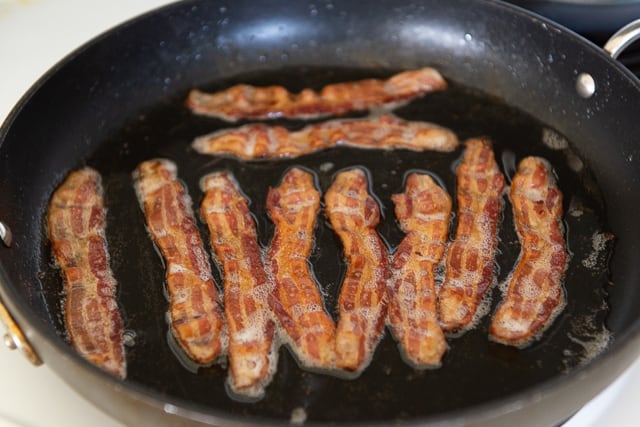 Remove the bacon strips to a paper towel to drain, then cook sliced baby bella mushrooms in the bacon fat until the moisture has cooked out and they are slightly browned: 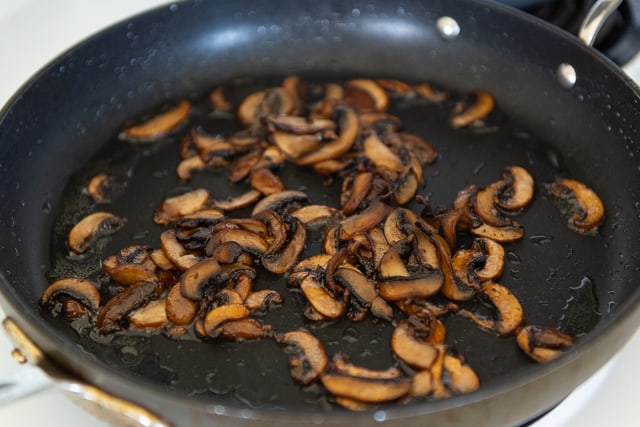 Remove the mushrooms to a bowl, leaving behind as much bacon fat as possible.

In case you are new to leeks, I’ll show you a quick picture of how to prep them.

You want to remove the tougher dark green tops, and I do this by shaving upwards: 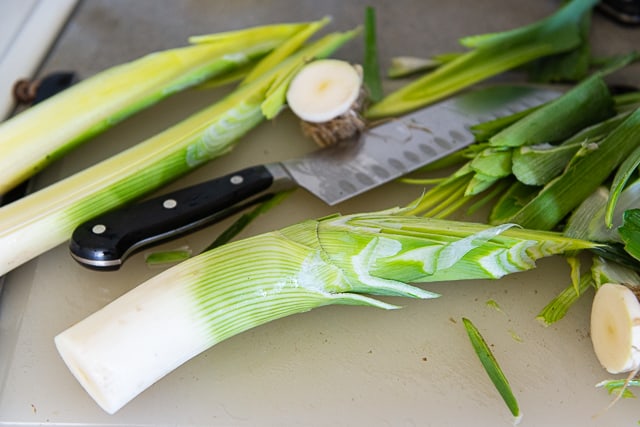 Then slice through the center down the length of the leek, and rinse them well before slicing, to remove any inner dirt.

Cook the leeks for 8-10 minutes, until they have softened and caramelized slightly: 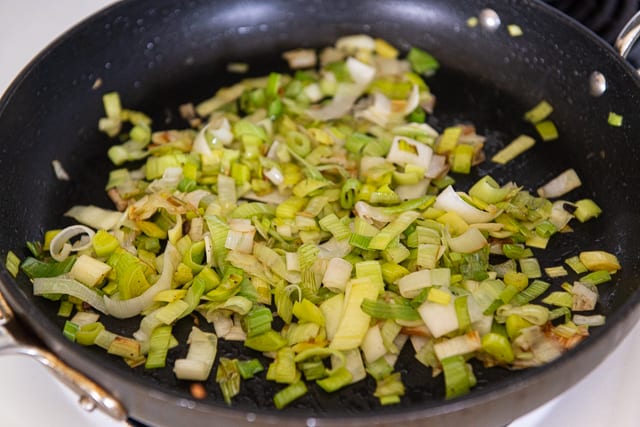 Remove the leeks to the mushroom bowl, then add chunks of russet potato to the pan (whether you peel them or leave the skin on is completely up to your preference. If I have time I peel them). 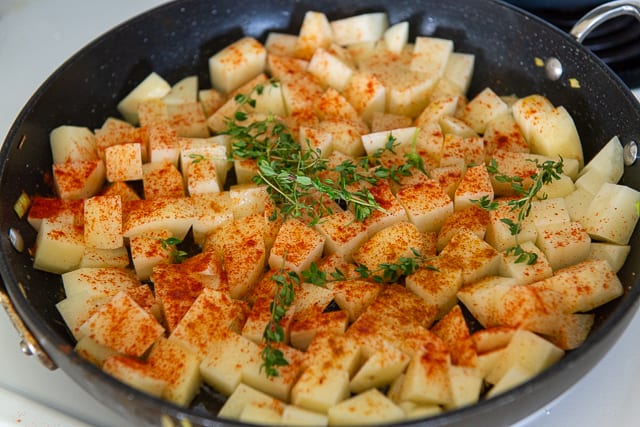 I had some fresh thyme on hand, but using dried works wonderfully too.

Stir everything around and cook the potatoes for about 20 minutes, until tender and golden: 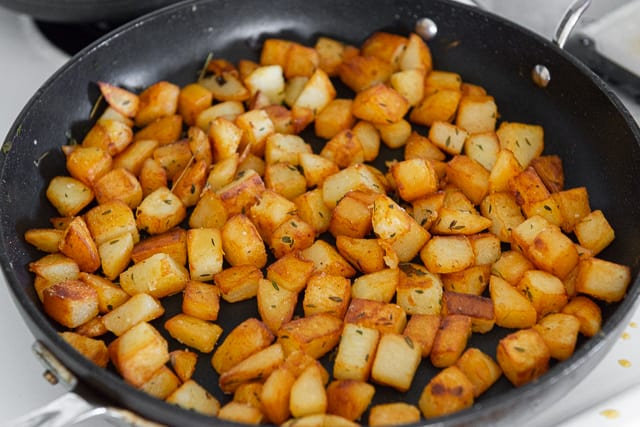 Chop or crumble the bacon, and add that back to the pan along with the mushrooms and leeks: 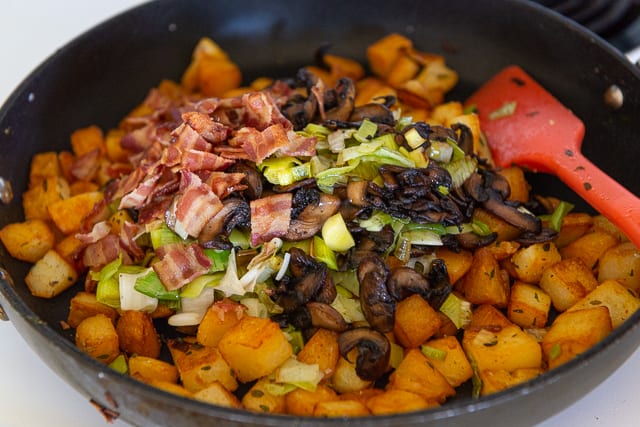 Stir it all together over the heat for 2 minutes, then the hash is ready to serve: 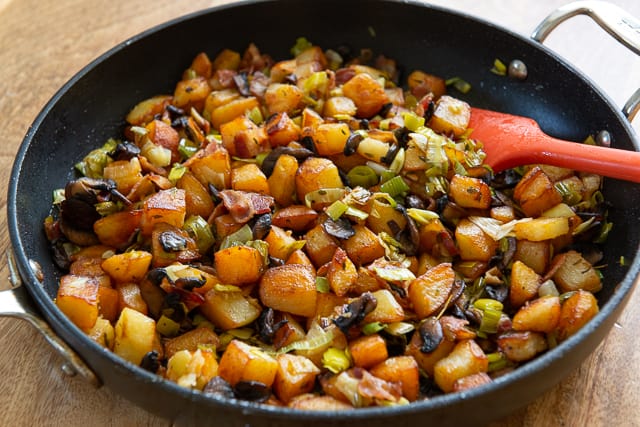 I love adding a fried egg or Poached Egg to really round out the meal. 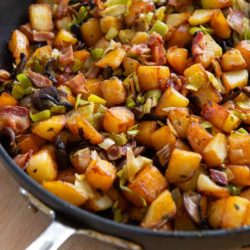 *See blog post for photo on how to shave upward to remove dark green part. Make sure to cut leek through the center and rinse under water to remove any dirt inside the leek, before slicing. Also, feel free to add more leeks (like 3 cups instead of 2) if desired. Note on cook times: they will vary slightly depending on your stove and heat output. I put ranges, but also cues to watch for to tell doneness.

14 Comments on “Potato Hash with Bacon, Leek, and Mushroom”