If I had to name some of the best desserts of all time, Baklava would be on the list for sure.

Anyone who’s tasted it knows why. The flavors and textures are so unique and so delicious!

If you haven’t had it before, it’s layers upon layers of butter brushed phyllo dough with cinnamon scented walnuts in the middle, and after you bake it, you pour a citrus honey syrup all over it for the phyllo to soak up.

It’s quite sweet, but provided you use a good quality honey, you can really taste those nuances, and the texture has the most pleasing crunch and bite. 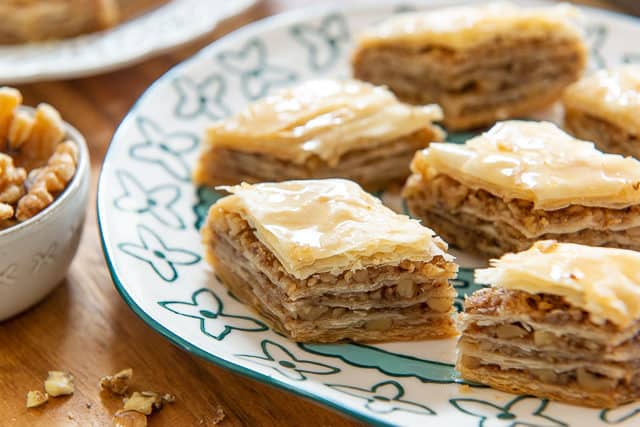 It is also one of the most practical desserts in terms of storage.

It keeps well in the freezer and fridge, and even keeps at room temperature for about a week, so it’s a great option for gifts too.

In fact, when I was a kid, my dad mail ordered baklava every Christmas season, so it’s shippable as well.

How to Make Baklava:

Place walnuts, cinnamon, cloves, and salt in a food processor: 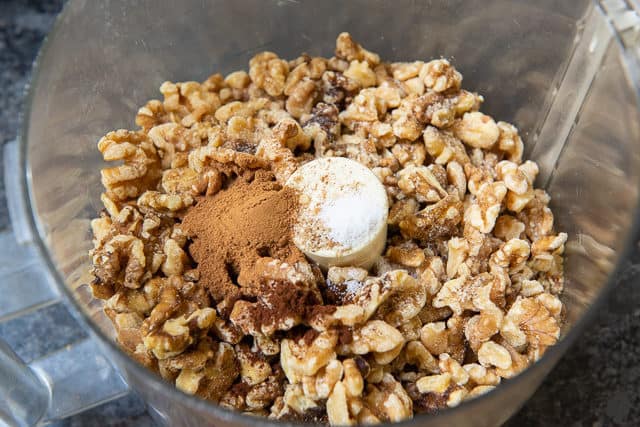 Pulse about 10 times, until the walnuts are well chopped: 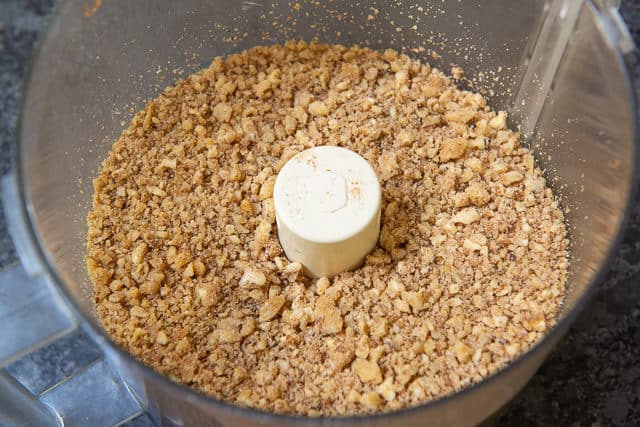 That’s the filling. It’s so easy! Now it’s time to build the baklava.

Place layers of thawed phyllo dough down into your pan, brushing each one with melted butter: 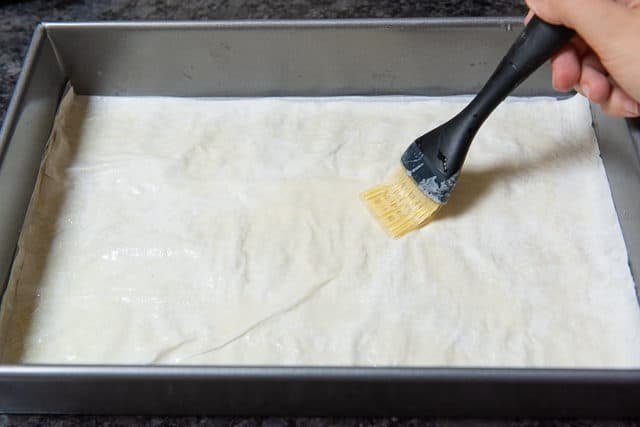 You don’t need to brush each layer thoroughly. Just a quick swish across several times, to cover most of it.

Assembling the baklava, you want to move relatively quickly, to prevent the phyllo from drying out, so no need to be meticulous with the butter.

Once you have 8 layers of phyllo, add about 1/5 of the walnut mixture to the pan, spreading it evenly: 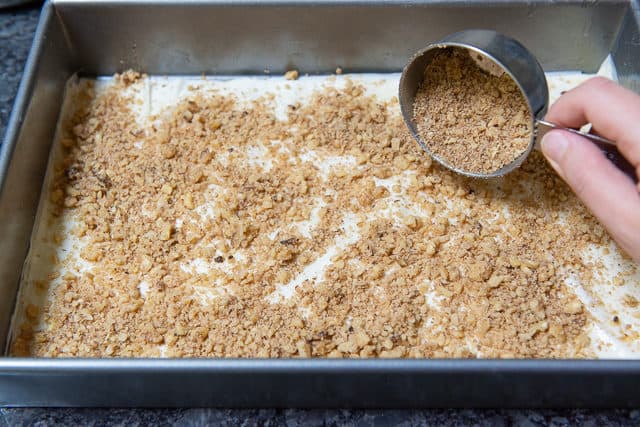 You’ll need about 2/3 cup of the walnuts for each nut layer.

How to make the Baklava even:

If you’re keen on making the baklava really even, here’s how I did mine.

Using a 9×13 pan, you should cut the sheets in half, which gives you 36 total sheets.

Once the baklava is layered, cut it into pieces using a sharp knife: 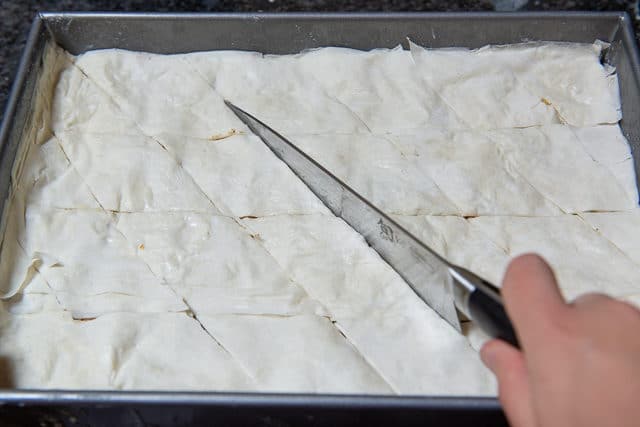 You can do squares, diamonds, triangles, or whatever shape you want.

Bake the baklava in the oven for 50 minutes, until it looks golden on the tops and edges: 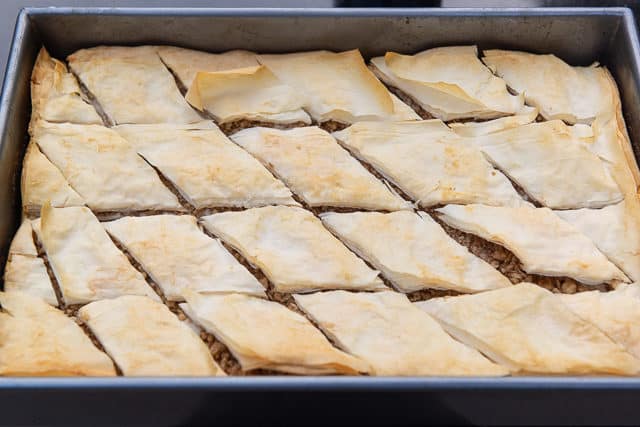 Then let the baklava cool for at least 15 minutes. In the meantime, start the syrup. Combine honey, water, sugar, cinnamon, orange peel, and lemon peel in a saucepan: 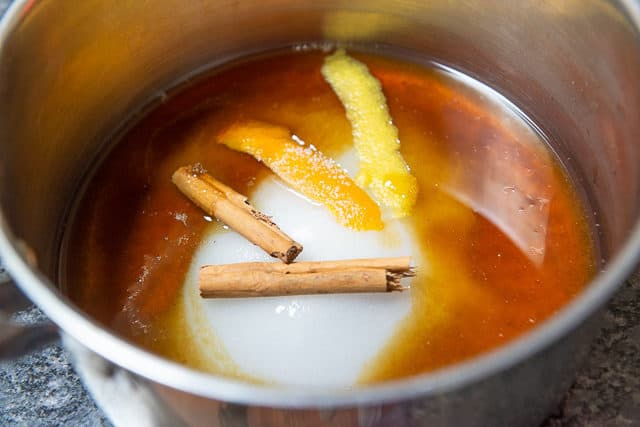 Bring to a boil, then cook for 5 minutes, to allow the cinnamon and citrus to flavor the syrup.

While the sugar syrup is still hot, pour it all over the baklava, which should soak it right up.

It is SO important that the syrup is hot when you pour it over, otherwise it won’t soak properly.

Now here’s the hard part….leave the baklava at room temperature for 8 hours, uncovered. 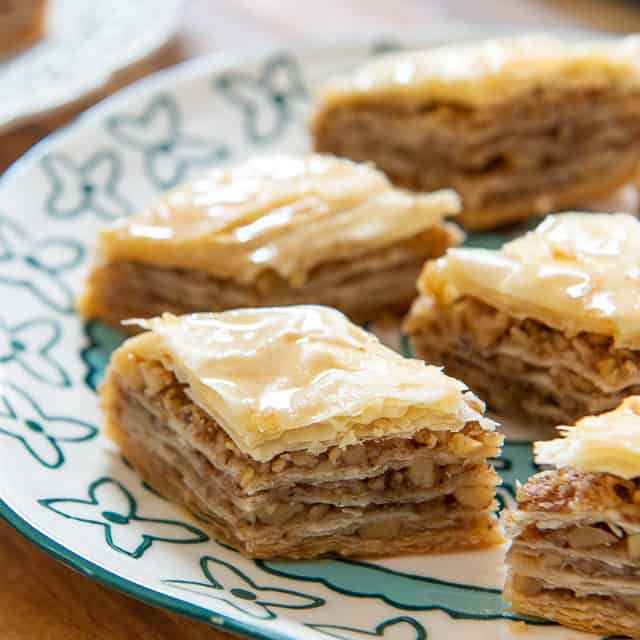 You want to leave it without a cover, to prevent sogginess.

Then the Baklava is ready to enjoy!

Can Baklava be frozen? Yes, it freezes beautifully. Store for up to 3 months in a sealed container.

Can Baklava be left out? Yes, but I wouldn’t keep it out at room temperature for more than a week. Store in the fridge for up to 3 weeks or in the freezer for up to 3 months.

Can Baklava be made a day ahead? Yes. Since it needs 8 hours of standing time before serving, it’s the perfect make ahead dessert.

Can you use other nuts in Baklava? Yes. Pistachios are also very popular, and you can do a blend of any nut you wish. However, I really think walnuts have the best taste and texture. 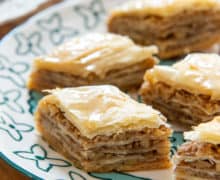 *My 1-lb box of phyllo said it had 18 13x18" layers, so I cut them in half, and had 36 sheets total for my 9x13 pan. **I cannot overstate how important it is to use a good honey here. If it comes in a bear shape bottle, probably steer clear. Ideally look for raw honey.