I have tried numerous Cinnamon Rolls recipes that all claim to be the best, but none have wooed me quite like this one. It’s adapted from a legendary Cinnamon Roll recipe by Zingerman’s Bakehouse.

We don’t have a lot of traditions in my family, but Cinnamon Rolls on Christmas morning is one tradition that will always remain. 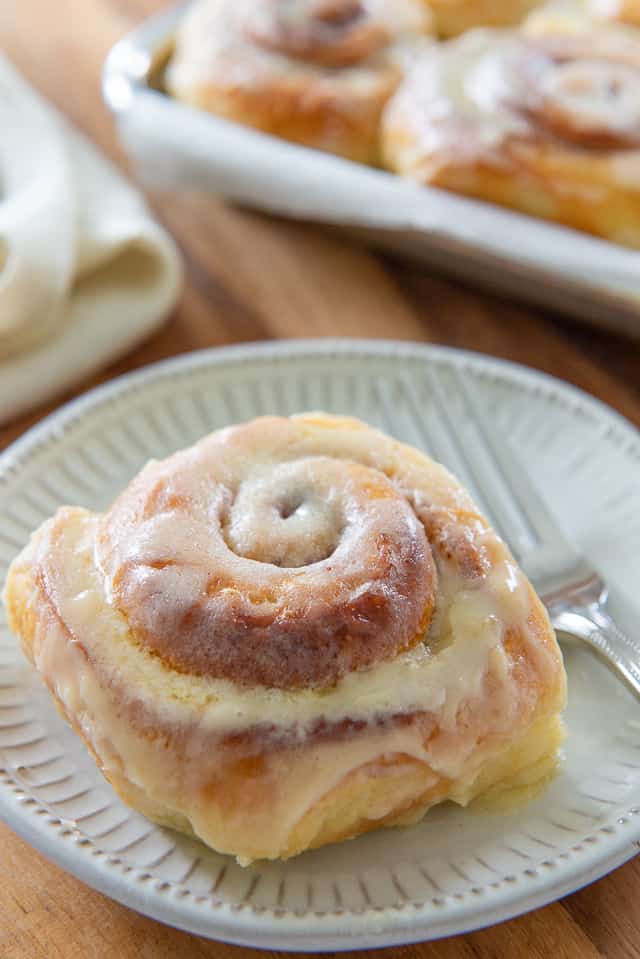 Everyone has their own way of doing them, and I’ve noticed that the most commonly used frosting is cream cheese.

I too, used to think that cream cheese frosting was the best.

I did a side-by-side taste test a while back with some family members, and the cinnamon rolls with the buttery icing were unanimously chosen over the cream cheese frosting rolls.

And for the record, I LOVE cream cheese frosting.

But it’s not as harmonious with the cinnamon rolls as a buttercream-style icing, and here’s why: 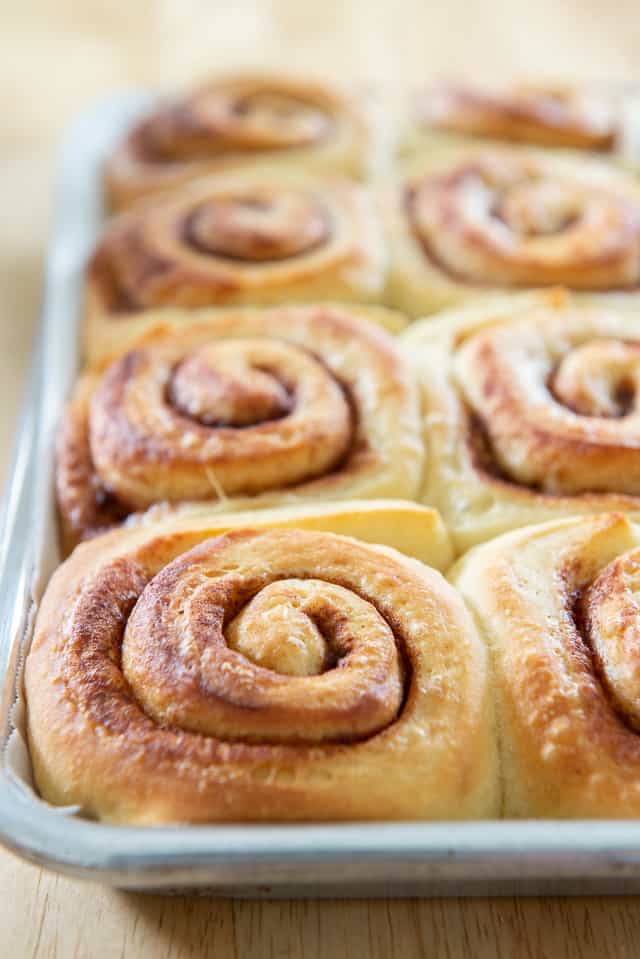 Cinnamon rolls should really be about the rich and fluffy dough and fragrant cinnamon filling, and cream cheese frosting takes the attention away from them. It’s overpowering.

Maybe for some recipes that’s a good thing, if the dough isn’t that impressive.

But this dough is impressive. Enriched with butter and eggs like homemade Brioche, with an airy and light texture, and an incredibly fragrant brown sugar cinnamon filling, it truly is the star.

Then you accent it with an old school butter icing that has the slightest hint of orange (which is optional, you could do vanilla instead), and it melts into the crevices of the rolls. Om nom nom. 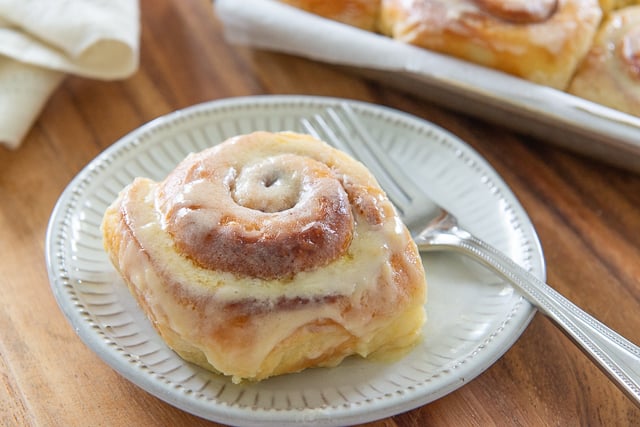 This recipe is adapted from legendary Zingerman’s bakehouse, via a blog that I found sharing a version of their cinnamon rolls from a baking class. I dug through pages and pages of google search results hoping to find something like this, as Zingerman’s does not share their cinnamon roll recipe in their cookbook (Amazon affiliate). The post from Judy and Steve is quite old, but the cinnamon rolls indeed remind me of the incredible version I tried at the Zingerman’s shop in Ann Arbor earlier this year.

How to Make Cinnamon Rolls:

We’re going to start by making a poolish, which sounds like a big deal, but is really just a pre-ferment step that improves the taste and texture of the final product.

Combine warm milk, yeast, and bread flour in the bowl of a stand mixer: 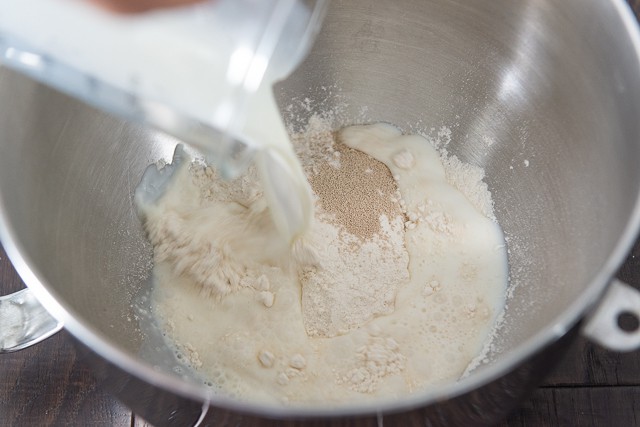 Mix with the paddle attachment until a soft dough forms: 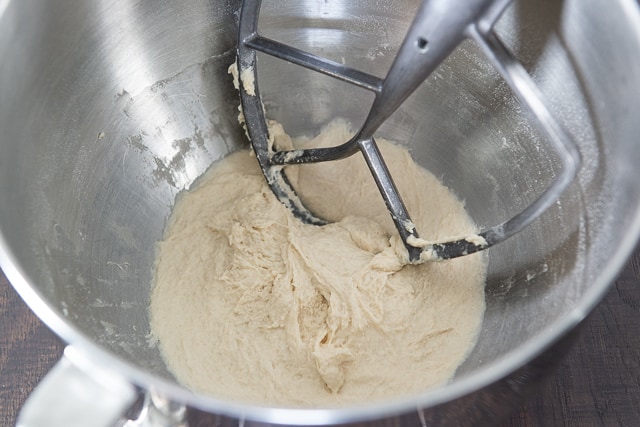 Cover the bowl and let the poolish sit for an hour, until it doubles in volume: 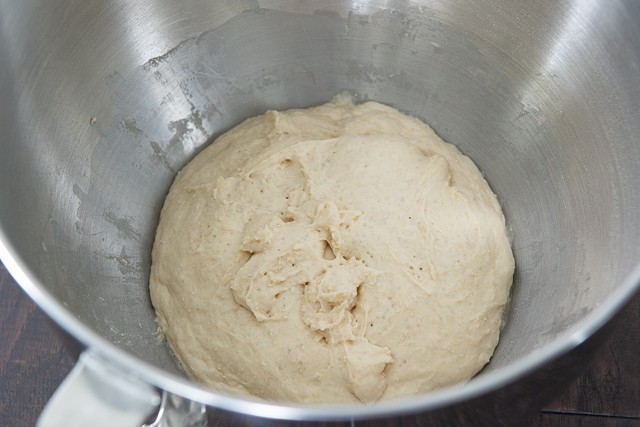 Remove the poolish from the bowl, then cream together some softened butter, granulated sugar, and salt. Then, mix in two eggs, one at a time: 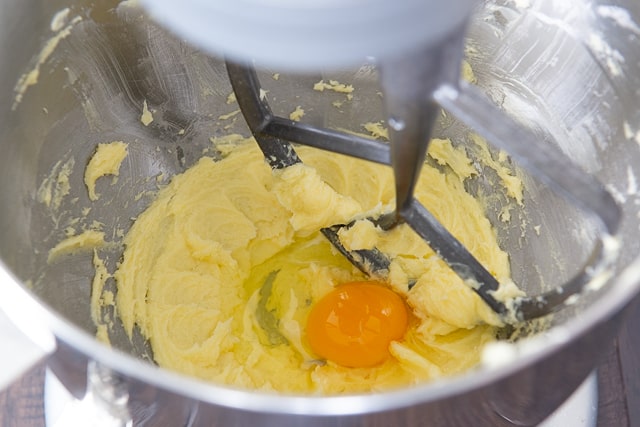 The mixture will look very curdled and liquidy, and that’s fine. Add a piece of the poolish, one at a time: 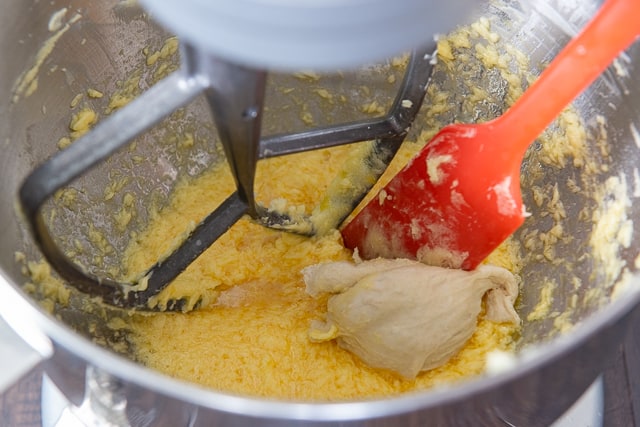 Until you get something that looks sort of like a cake batter: 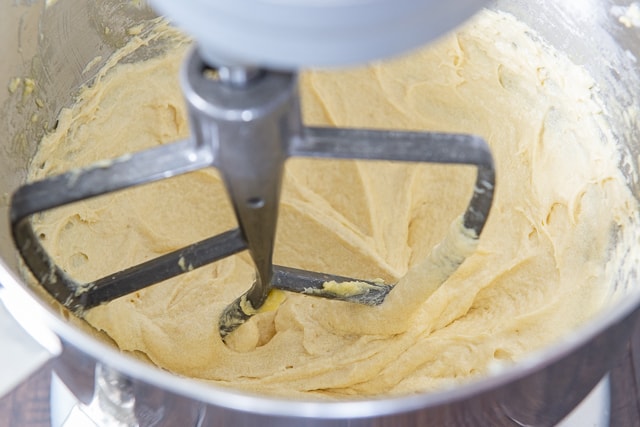 Add bread flour to the bowl: 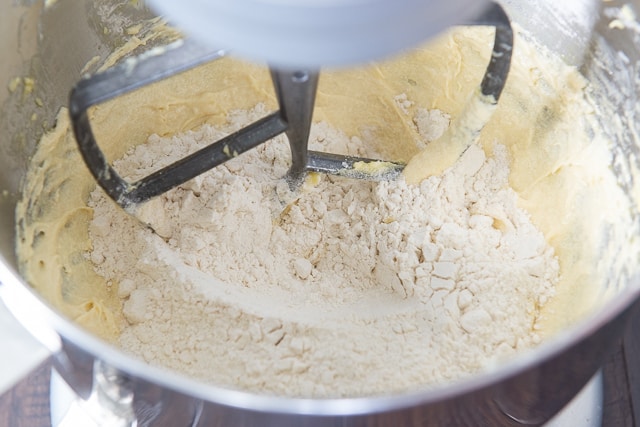 And finally, you’ll get a very sticky looking dough: 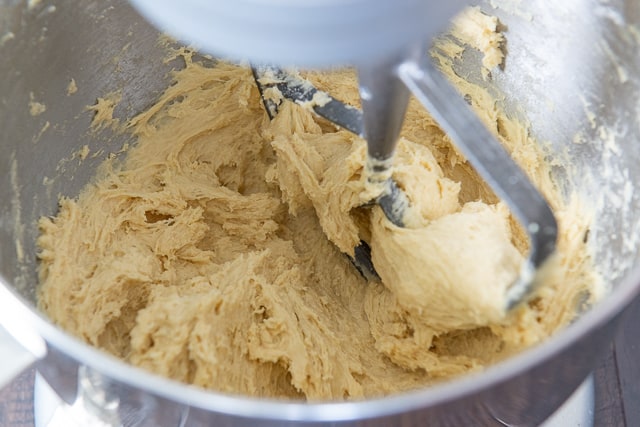 Scrape all the dough off the paddle and shape into a ball. Cover the bowl and pop this into the refrigerator overnight. 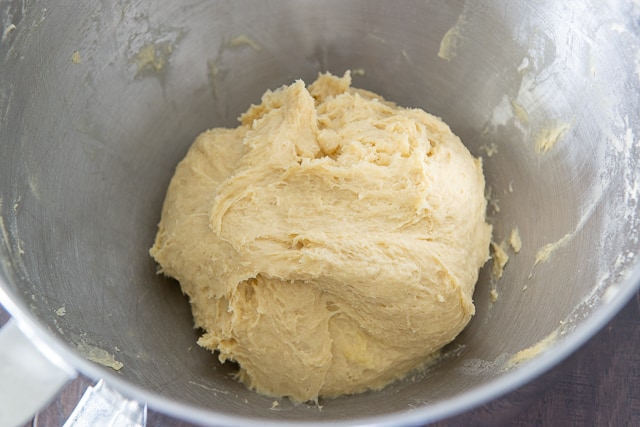 In the morning, mix together the cinnamon filling, which is made from brown sugar, cinnamon, and salt: 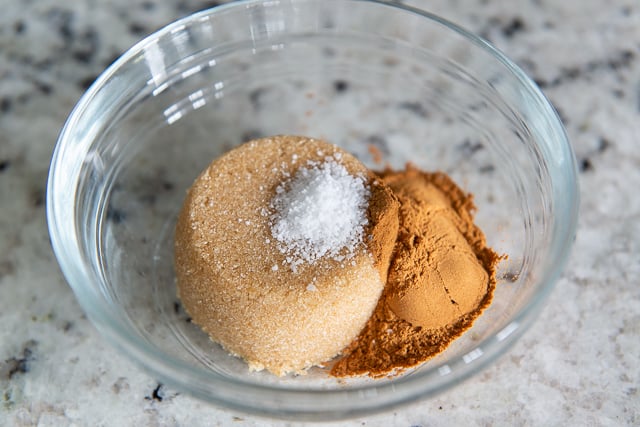 Roll the dough out into a 7×18″ rectangle and brush with butter, to help the cinnamon filling stick: 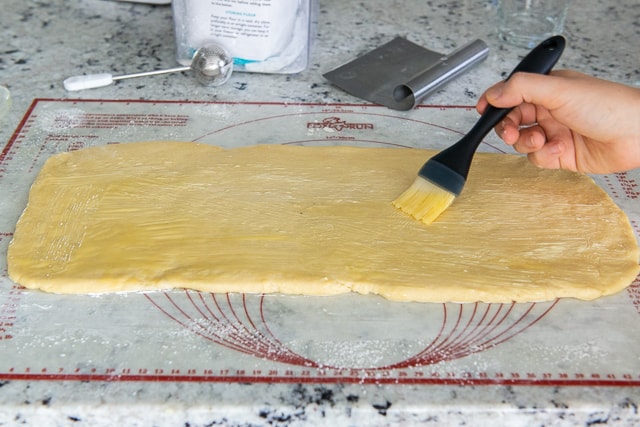 By the way, since I get asked all the time, this is the baking mat pictured above (Amazon affiliate link) that has the diameter measurements labeled. It’s really helpful whenever I bake!

Gently pat the cinnamon brown sugar into the dough, leaving some edge at the top: 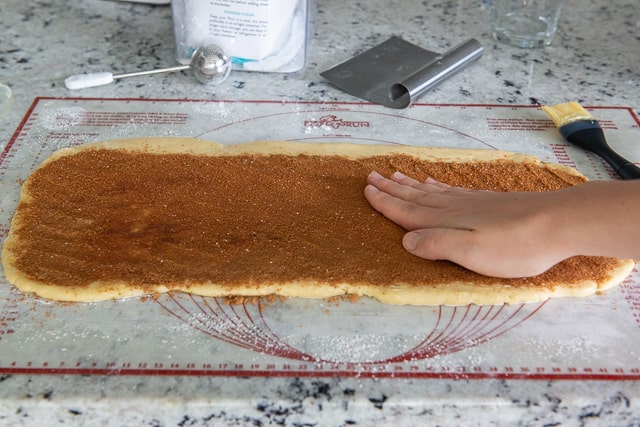 Roll the rectangle up tightly, and notice the direction you want to roll is upward, keeping the log really wide: 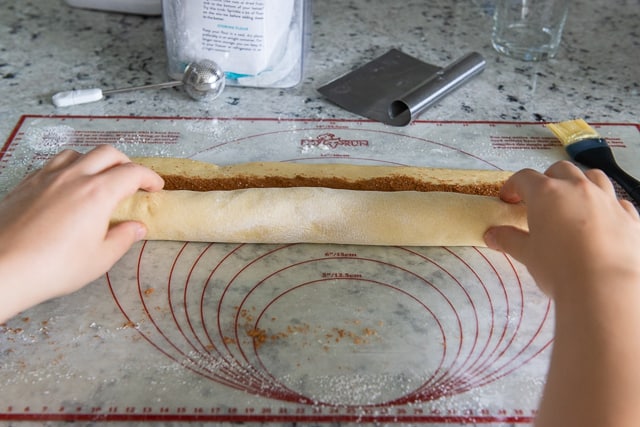 Then use a bench scraper or knife to cut the log into 12 pieces: 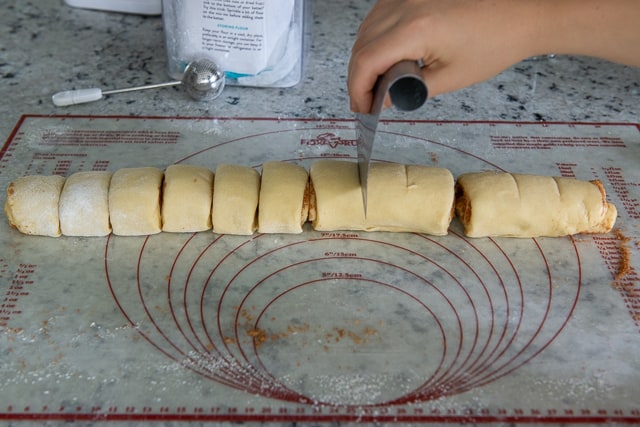 It’s easiest to do this by cutting the log in half, then each of those pieces in half, then cutting each quarter into even thirds. Each piece should be about 1.5″ thick.

Place the cut cinnamon rolls on a parchment lined quarter sheet pan (or 9×13 baking dish) and gently press the tops down to flatten: 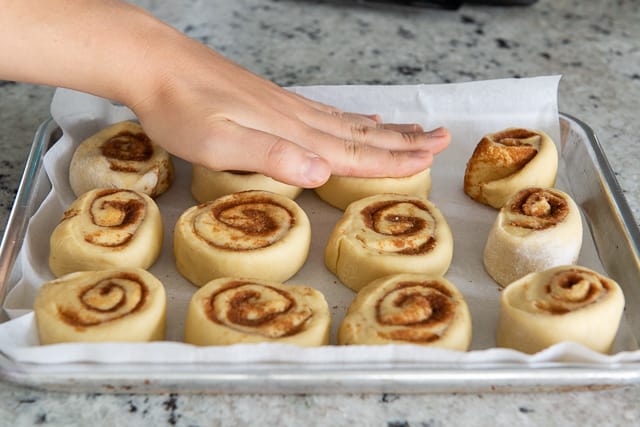 Cover the cinnamon rolls with plastic wrap or even better, a lid (this is why I love this sheet pan with lid so much – Amazon affiliate link): 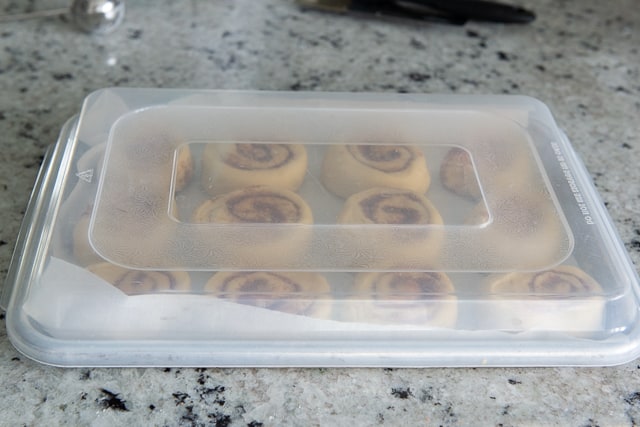 After a 2-hour rise, the cinnamon rolls should fill up most of the empty space from before: 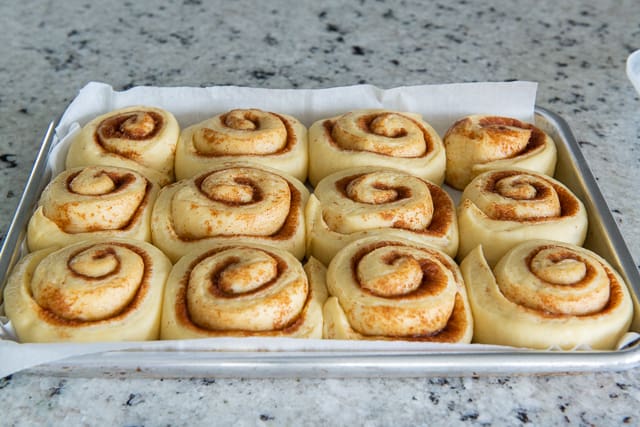 Bake the cinnamon rolls for 15-18 minutes. In the meantime, make the icing by whipping together butter, confectioner’s sugar, orange juice, orange extract, and salt: 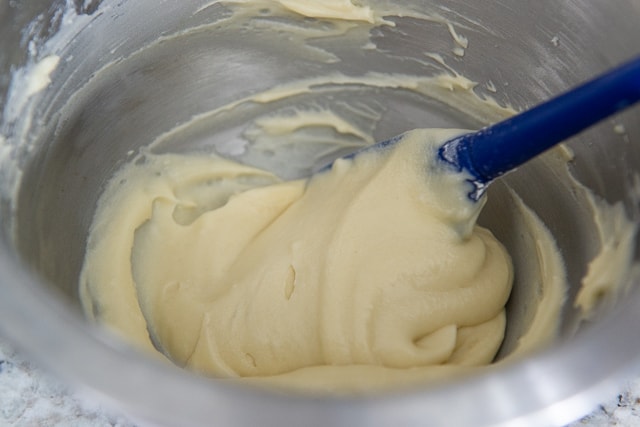 If you want to skip the orange hint of flavor, I have instructions in the recipe box for substituting milk and vanilla extract instead.

When you pull the cinnamon rolls out of the oven, they should be golden brown on the edges and quite fluffy inside: 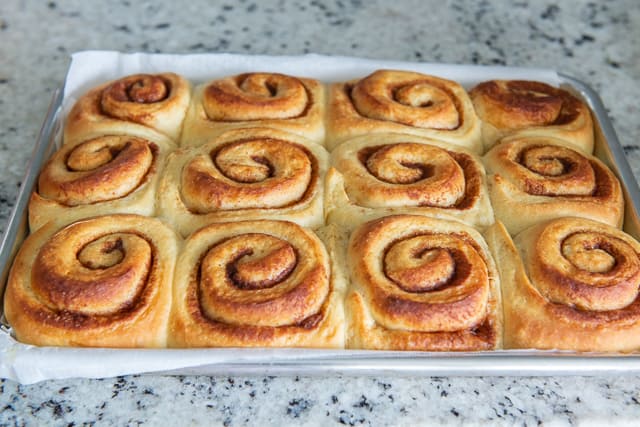 Let the rolls cool slightly, but slather on the icing while they are still warm: 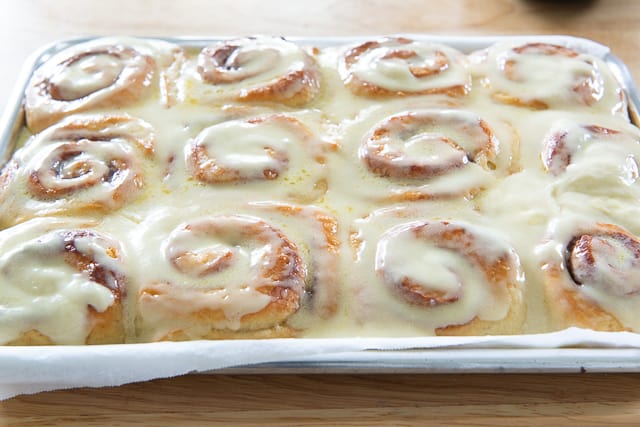 The goal is to have the icing melt slightly, but not completely.

Cinnamon Roll Pancakes are another fun recipe to try if you want the pancake form of cinnamon rolls. Enjoy!

How to Freeze Cinnamon Rolls: Completely bake, frost, and cool the rolls, then place into an airtight container. They will freeze well for up to 2 months.

How to Reheat Cinnamon Rolls: You can microwave them directly from frozen for about 20-30 seconds for one roll. 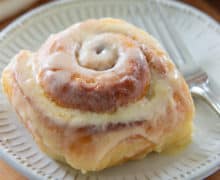 You will also need a small amount of flour for dusting the work surface when you roll the dough out, max 1/4 cup

1798shares
All Recent Posts, Breakfast and Brunch, Most Popular Sweets and Desserts
32 Comments »