If you’re looking for the absolute best way to cook cauliflower, this is it! This Roasted Cauliflower recipe will give you florets with wonderfully caramelized golden edges, and a tender but not mushy texture. It’s good enough to enjoy on its own, or you can sprinkle on your favorite cheeses or herbs.

One of the secrets to loving vegetables is to find the best ways to cook them, and roasting is arguably the best way to make cauliflower.

Sure, I also love Cauliflower Rice, Cauliflower Mashed Potatoes, and other dishes, but I believe roasting is the king of all cooking methods when it comes to this cruciferous vegetable.

No joke, I sometimes eat this for breakfast along with some eggs, because I love it so much.

Sometimes I see recipes for roasted cauliflower on the internet that claim to be the best, but they have zero color or caramelization to them. But that to me is the whole point, and exactly the flavor we are going for!

Why You’ll Love This Recipe

The least “stinky way” to cook cauliflower – This is a vegetable that can go “stinky” very easily, like if it’s steamed. But it’s not like that at ALL when it’s roasted. It has the most deliciously nutty and caramelized flavor.

Perfectly cooked – This method will give you golden brown color and flavor, along with a tender, but not dry interior.

Straight forward and versatile – Toss the cauliflower florets in salt, pepper, and fat (like olive oil or ghee), and it’s truly good enough on its own. Or, you can add your favorite cheeses, herbs, and spices.

I’ve made roasted cauliflower hundreds of times, and I’ve played around with different roasting temperatures and times.

The method below is how I’ve settled as the optimal way to create the most browned and caramelized version possible in the oven.

Tips for the Best Results

Don’t overcrowd the pan – As you roast the cauliflower florets, their interior moisture will cook off. Allowing space between the florets allow that steam to cook off more easily. If the pan is too crowded, the pieces will steam each other instead of browning.

Make sure the pieces are the same size – It’s important to use uniform pieces of cauliflower. If the pieces are similar in size, they will cook more consistently.

Toss partway through – It takes a little more effort to toss the florets around while baking, but it will give you much more even browning and cooking.

There are three main steps for How to Make Roasted Cauliflower. First cut it up, then toss in seasoning, then roast!

Here’s how to cut cauliflower from the whole head into florets:

Begin by cutting sideways into the stem, then pull it off:

This will allow you to better see the florets, and you can cut them away from the center:

This will give you all the big florets, however they’re still too large for roasting:

Cut some of the bigger chunks into halves or quarters, then place them in a large mixing bowl with some olive oil, ghee, or your cooking fat of choice:

Season the florets generously with salt and pepper.

Toss everything together thoroughly with a spatula.

Toss in a mixing bowl, not on the sheet pan.

Tossing the cauliflower with the fat in a mixing bowl, instead of on the sheet pan, is important.

It’s a nice idea to toss right on the pan to save yourself a dirty bowl, but it doesn’t coat the florets as well and evenly in the oil, which is important for browning.

Spread the florets out onto a sheet pan:

It’s important to arrange the vegetables in a single layer, not too crowded, otherwise they won’t brown properly.

How Long to Roast Cauliflower:

Roast the cauliflower for 25 minutes, until the tips and edges are starting to brown:

Toss all of the pieces around using a turner, and roast for another 10-15 minutes.

This time, the florets should be thoroughly browned all over:

I love tossing this into a salad with this Roasted Pork Tenderloin, Lemon Vinaigrette, and leftover quinoa, for a hearty lunch or dinner.

It’s also good enough to eat on its own, provided it’s seasoned well with salt and pepper. I love the stuff. Enjoy!

What to Serve with this Side Dish:

Can Roasted Cauliflower be reheated?

Yes, I simply reheat in the microwave until warm, but you can also rewarm it in a skillet on the stove, or in the oven.

Can Roasted Cauliflower be frozen?

Yes it can, but the texture won’t be as nice afterward. It’s still good though.

How do you store leftover baked cauliflower?

Keep in an airtight container in the fridge for up to 5 days. Know that leftovers can get a little stinky, and it’s just the nature of the vegetable.

It’s full of fiber and nutrients, it’s low carb, and fits with many eating lifestyles like Whole30, keto, paleo, vegan, and more.

You can pre-cut the florets up to 3 days ahead of time, before roasting.

Did you enjoy the recipe? Please leave a 5-star rating in the recipe card below and/or a review in the comments section further down the page. Or, follow me on Facebook, Instagram or Pinterest! 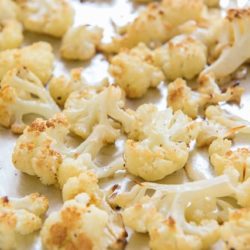 *Mine weighed 2lbs before any trimming. It equaled 8 cups of florets once I cut it down. **You may also use ghee, or your cooking fat of choice. ***Excess water on the cauliflower before roasting will prevent browning. Reheating: Microwave is the simplest method, though you can also rewarm in a skillet on the stove or in the oven. Storing leftovers: Keep in an airtight container in the fridge for up to 5 days. Know that leftovers can get a little stinky, and it’s just the nature of cauliflower. Freezing: Store in an airtight container for up to 2 months. Know that the texture won’t be the same.