For this Million Dollar Chicken recipe, a whole chicken is stuffed with garlic, lemon, and rosemary, and brushed with a luxurious creme fraiche while it’s roasted. A slice of sourdough underneath the chicken collects all the delicious juices and flavors too! 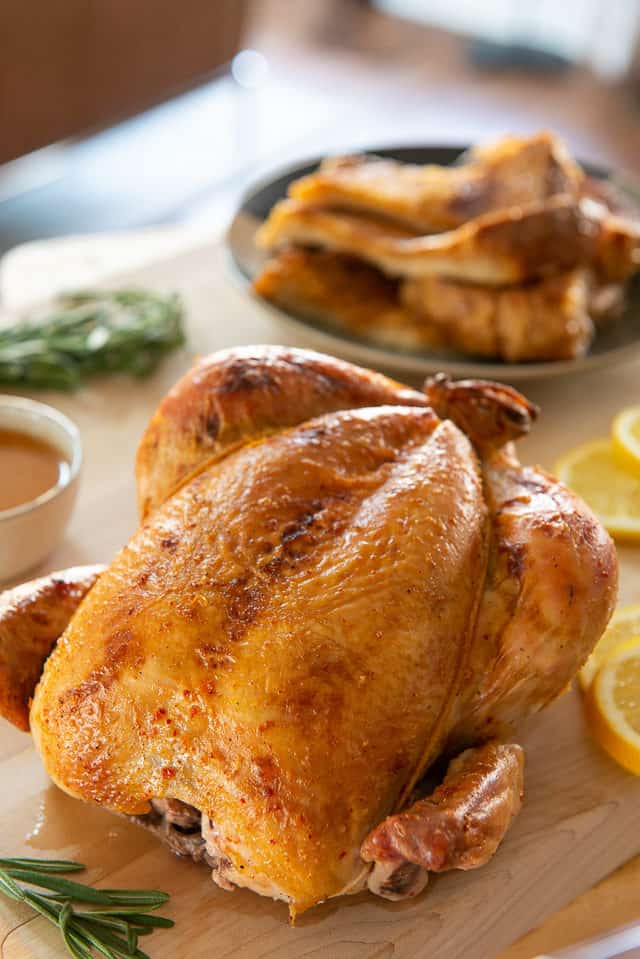 I’m always eager to try new ways of making chicken, and this was a recipe I tried back in 2013 after seeing it featured on an episode of Ina Garten’s Barefoot Contessa on Food Network.

Ina was at the Standard Grill restaurant in NYC where the chef was showing how to make this signature dish, and I was immediately intrigued.

At first everything seemed pretty standard for roast chicken. The cavity is stuffed with aromatics like lemon and garlic, and gets a good rub of salt, pepper, and olive oil.

But then the chef did a few curious things. 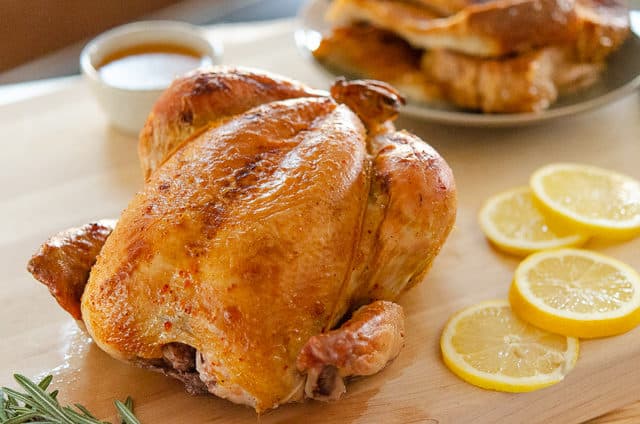 First, he put the whole chicken on top of a thick slice of bread, resting in the roasting pan.

The result is a golden brown, crusty piece of bread that has spent an hour in the oven soaking up all the chicken juices and flavor. It’s SO good!

It’s kind of like a gigantic crouton, as it’s very toasted on the bottom, but because it’s soaking up juices and creme fraiche on the top too, it takes on a more moist and stuffing-like upper.

The chef also brushed the chicken with creme fraiche right at the end, which admittedly is an ingredient I like but hadn’t cooked with much at home.

I had always thought of creme fraiche as a very “restaurant” ingredient, but it’s actually really easy to find in most grocery stores.

How to Make Million Dollar Chicken:

To get started, set up your bread base by placing two slices of thick sourdough bread into a cast iron skillet: 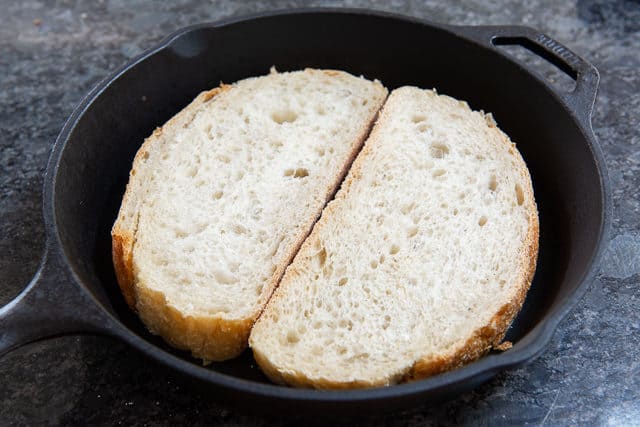 For the cavity of the chicken, you’ll want a few lemon slices, a sprig of rosemary, a bay leaf, and fresh garlic cloves: 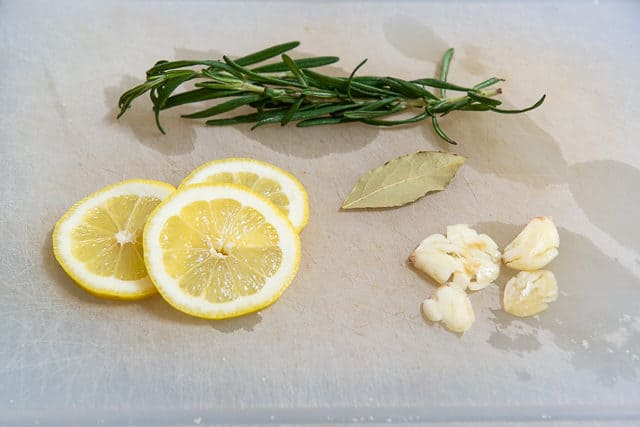 I smash the garlic to release the flavor, then put everything inside the cavity.

Rub the entire chicken inside and out with plenty of salt and pepper, then truss the bird with twine and place it into top of the bread. 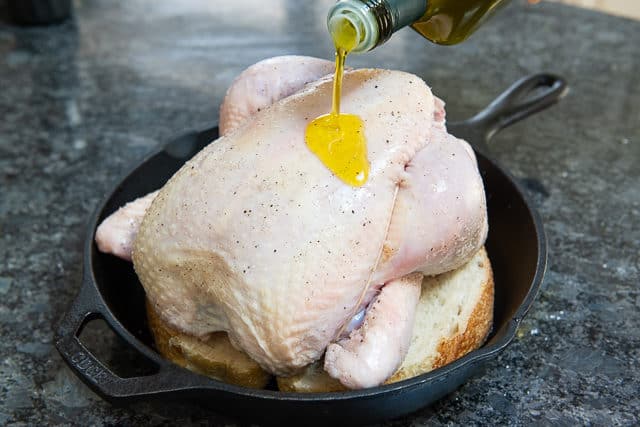 After a little rub of olive oil, the chicken is now ready to head to the oven: 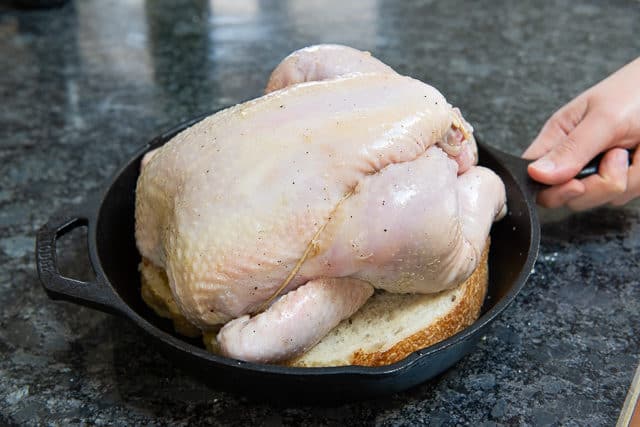 While the chicken is roasting, prepare the creme fraiche mixture, which is creme fraiche, fresh lemon juice, lemon zest, and pepper flakes: 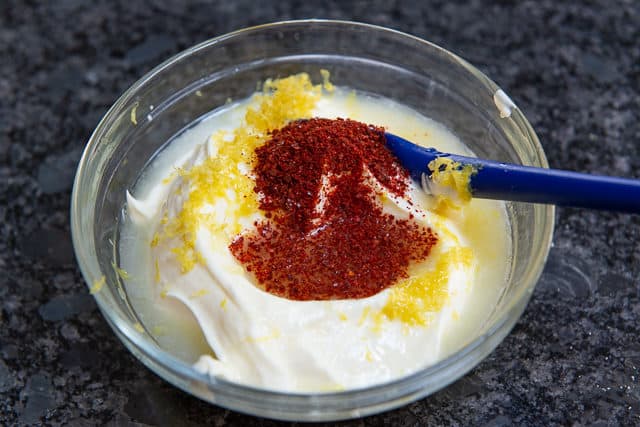 The Standard Grill uses Aleppo pepper in the episode, but I have used smoked paprika and had success, and also Gochujaru flakes, which I’m using here. I have a jar of it in my fridge and it’s something I can easily get from my local Whole Foods, whereas I haven’t seen Aleppo pepper anywhere except online. You want something that’s relatively mild and fruity, and Gochujaru works well as a substitute.

Also, if you’re not familiar with creme fraiche, it’s like a cross between sour cream and mascarpone, both in flavor and in texture. It’s creamy, silky, tangy, and flavorful.

When the chicken is almost done cooking, brush the creme fraiche mixture generously all over the chicken: 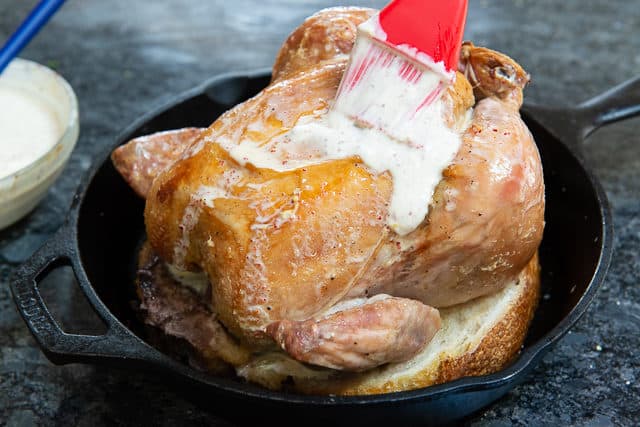 Continue roasting the chicken, until fully cooked and golden on the outside, then let it rest on a board. 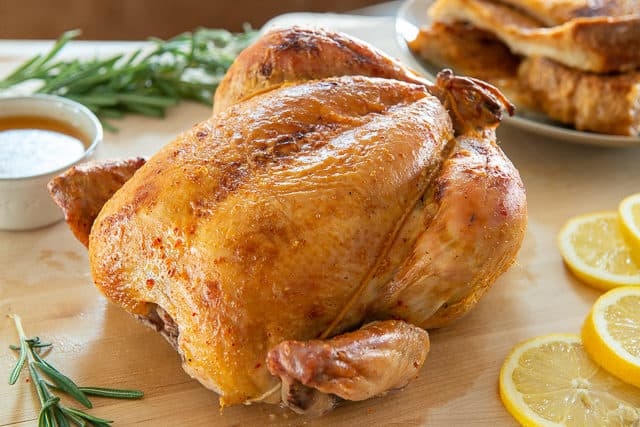 In the meantime cut the bread into pieces for serving with the meal. The bread should be thoroughly crisped on the bottom, like a big crouton, but have a fair amount of moisture as well from all the chicken juices and creme fraiche. It’s such a treat!

Just a few more notes for this recipe:

The chicken skin won’t be crispy once you brush it with the creme fraiche, so if you’re obsessed with crispy skin, that’s a tradeoff that maybe you won’t want to make here.

In the original recipe, you prepare the chicken by stuffing it and seasoning it a day ahead of time. If you can plan ahead, that advance step will make it better. Most of the time I don’t get that far ahead, and it’s still great.

Be very careful not to overcook the chicken. Unlike my Spatchcock Chicken recipe, I find that whole trussed birds can go dry pretty easily if you overcook them. Make sure to use a thermometer.

Roasted Brussel Sprouts, Roasted Cauliflower, and Charred Broccoli are some great vegetable side dishes to serve with this meal. Enjoy your Million Dollar Chicken! 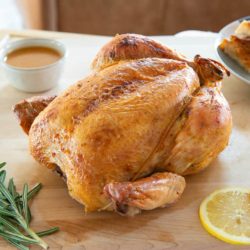 *A general guide is 1 tsp of kosher salt per pound of meat. Recipe method adapted from the Standard Grill.