Think of Croque Madame as the French equivalent to the American grilled cheese, but even more delicious! Crusty bread is spread with a Mornay sauce and Dijon mustard, stuffed with ham and gruyere, and topped with a fried egg. It only takes 20 minutes to make this epic sandwich!

I’m pretty sure this is my favorite sandwich ever. And I say that having some pretty amazing contenders on the blog, like this Cheesesteak Sandwich, Eggplant Parmesan Sandwiches, and this Italian Club Sandwich.

I had an absurd number of croque madame sandwiches while I was in Paris, considering all of the food choices that I had while I was there. But I just couldn’t stop eating these. And if you’ve ever had one, you know why. It’s such a great French classic!

Why This Recipe Is So Incredible

Rich textures – This sandwich is not just crunchy. Because the Mornay sauce soaks into the bread and goes under the broiler for a few minutes, it gives it a rich and gooey interior as well, not to mention the melty texture of the Gruyere.

Rich flavors – The slight sweetness of the meaty ham, with sharp Dijon to contrast, the nuttiness of the gruyère cheese, the creaminess of the Mornay…it’s all so magical together.

Surprisingly easy to make – Even though it sounds like a lot is going on with this sandwich, it’s really not time-consuming or hard to make.

Only 20 minutes – Give yourself 20 minutes in the kitchen, and you’ll have a big platter full of hot sandwiches to enjoy by the end.

Use good bread – Plain sandwich bread won’t make for a bad result per se, but an artisanal loaf is better. A sturdy loaf bread like sourdough is superior in flavor and texture.

Use good mustard – Try to avoid a cheap yellow mustard here, and go for a good Dijon, maybe even one that’s a little grainy.

Do your mise en place so you can eat promptly – For the best eating experience, you’ll want to enjoy the croque madame while it’s hot and crusty. So have your pan ready for quickly cooking the eggs and serving as promptly as possible.

A big part of the croque madame is a creamy Mornay sauce that soaks into the bread.

What is Mornay Sauce? It’s basically just a bechamel sauce with gruyere added at the end. It’s like Homemade Nacho Cheese Sauce but with Gruyere instead of Cheddar. It’s simple to make and takes less than 10 minutes!

To start, melt butter in a skillet or small saucepan over medium heat, then add an equal amount of all-purpose flour:

It doesn’t matter much here if you use salted or unsalted butter.

Whisk the flour and butter to combine them into a blond paste, then slowly whisk in milk:

Heat it up to thicken

Bring the mixture to a boil over medium-high heat, and watch the sauce thicken, just as when you make a béchamel sauce:

Turn the heat off, then add the cheese

Turn the heat off, then add shredded gruyere, kosher salt, and a touch of grated nutmeg:

Give the white sauce a whisk, until the cheese melts and the sauce has a thick and gooey texture:

Now we can make the sandwiches!

How to Assemble The Sandwich:

To make the croque madame sandwiches, spread half the bread slices with mustard. Then spread the remaining slices of bread with the Mornay sauce. Then top with shredded gruyere on one side, and deli ham on the other:

I have tested tons of variations of this sandwich over the years, and though I commonly see white sandwich bread used, I think a sturdy loaf bread like sourdough is MUCH, much better. It has better flavor and texture.

Using a sturdy bread ensures the sandwich can hold all the ingredients without falling apart.

Also, Dijon mustard is my favorite mustard choice for the sandwich, though sometimes I’m in the mood for a more grainy mustard. Use your favorite.

What kind of ham to use?

My preference is Black Forest ham, and I view this as the ultimate ham for any sandwich. But other types will go nicely too. My deli carries a delicious rosemary ham which can be a nice additional flavor here, though less traditional.

Ask the deli attendant for thinner slices of ham when you buy from the grocery store.

Put the sandwiches together, then spread the outsides with softened, salted butter:

This is not only important for flavor, but aids in giving you the toasted bread you’re going for in the end.

Pan fry the sandwiches in a nonstick skillet for a few minutes on each side until golden brown, just as you would with the usual American grilled cheese:

That’s step 1 of cooking them, but there’s one more step.

Get ready to broil the sandwiches

Transfer the crisp sandwiches to a baking sheet, and spread the top of each sandwich with more Mornay sauce.

You can also add more gruyere on top if you’d like, which I admit is unnecessary but sometimes I do it anyway. Especially if I have any remaining gruyere that I’ve already shredded:

Pop the sandwiches underneath the broiler in your oven, until the Mornay and cheese are bubbling and melted:

And finally, to turn the Croque Monsieur into a proper Croque Madame, you need a couple of sunny side up or fried eggs to put on top:

I love dipping the sandwich into the yolk of the runny fried egg, but this sandwich is plenty outrageously delicious as just a Croque Monsieur if you feel like skipping the egg altogether.

If you want to pack this sandwich for a picnic, I recommend skipping the egg, and wrapping each hot sandwich in parchment paper.

Something light is nice to have on the side, like a simple mixed greens salad with Lemon Vinaigrette or Balsamic Vinaigrette. The sandwich is quite rich.

You can also serve it with certain soups, like Tomato Bisque, Butternut Squash Soup, or Carrot Coconut Soup.

Make sure to serve the sandwiches promptly while they are hot and crusty!

What’s the difference between a croque monsieur and a croque madame?

A croque madame has a fried egg added on top. Otherwise, it’s the same sandwich.

How do you store leftovers for croque madame?

Let the sandwiches cool to room temperature (this prevents sogginess), then store in an airtight container in the fridge for up to 5 days. You can also freeze leftovers for up to 2 months.

How do you reheat croque madame?

The microwave will make the sandwiches soggy, so I recommend taking the time to reheat in the oven. Try a 300F oven for 10-15 minutes, until warmed through. 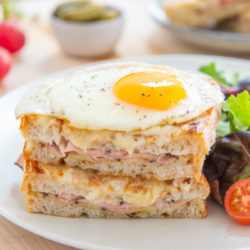 For the Mornay Sauce:

For the Croque Madame:

Ideas for Side Dishes for Pairing:

To Make the Mornay Sauce:

To Make the Croque Madame Sandwiches:

There’s enough mornay sauce here for 4 hefty sandwiches, and you could possibly stretch it to 6. Also, you can choose to make only 1 or 2 sandwiches at a time, and keep the leftover mornay in the fridge for making additional sandwiches another day. Use a sturdy bread: I have tested tons of variations of this sandwich over the years, and though I commonly see white sandwich bread used, I recommend a sturdy loaf bread like sourdough. Leftovers: I don’t recommend storing the egg, but the sandwiches keep well. Let cool to room temperature (to prevent sogginess), then store in an airtight container in the fridge for up to 5 days. You can also freeze for up to 2 months. Reheating: I don’t recommend the microwave, as the sandwich will be soggy. Reheat in a 300F oven for 10-15 minutes, until warmed through.