These Pecan Sticky Buns are a treat to make for a special breakfast or brunch. Sweet dough is rolled with cinnamon and brown sugar, and topped with butterscotch glaze and toasted pecans.

This is one of those recipes where once I saw the picture, I had to make it immediately. 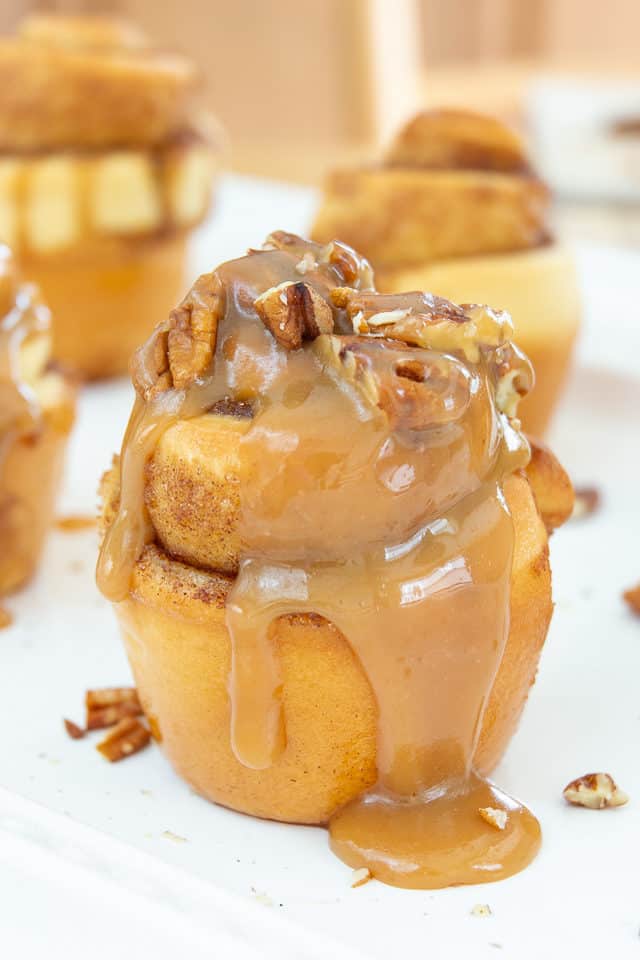 My husband’s credit card company mails us free Food & Wine Annual Cookbooks, and while flipping through one I received in 2011, I came across a recipe for Butterscotch Sticky Buns.

I admit to loving really indulgent dessert-like breakfast recipes (hello Cinnamon Roll Pancakes), so I pretty quickly skipped ahead to check if I had the ingredients. Lucky me, I did.

What’s extra appealing about these buns is how they are baked. Instead of baked on a flat pan, the dough is rolled and placed in a muffin tin, so they rise up very tall and proud like a big frosted cupcake.

Except it’s all sweet dough, a bit golden on the edges and soft in the middle, with a butterscotch sauce drizzle on top, and a bit of pecan to accent the flavors.

Since the pecans go right on top, you could easily skip them if you’re not a fan of nuts. But I love all things sweet pecans (hello Pecan Praline Candy).

Or, if you want extra pecan flavor, you can always chop some up very finely and roll them right into the dough with the cinnamon sugar filling.

How to Make Pecan Sticky Buns:

Start by making the sweet dough in a stand mixer, which is made from milk, yeast, sugar, butter, eggs, flour, and salt: 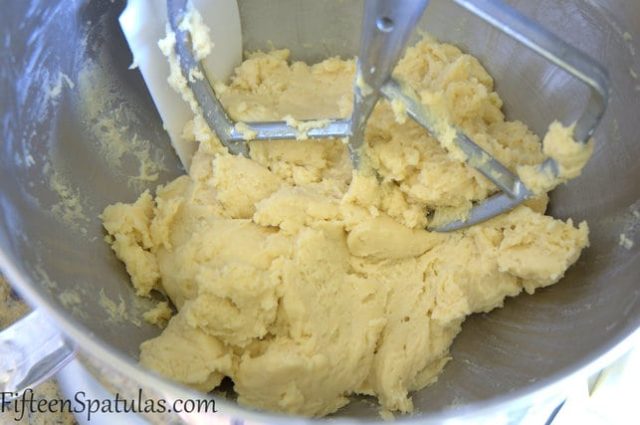 Roll out the dough in the same long rectangular fashion as cinnamon rolls, and sprinkle on cinnamon brown sugar: 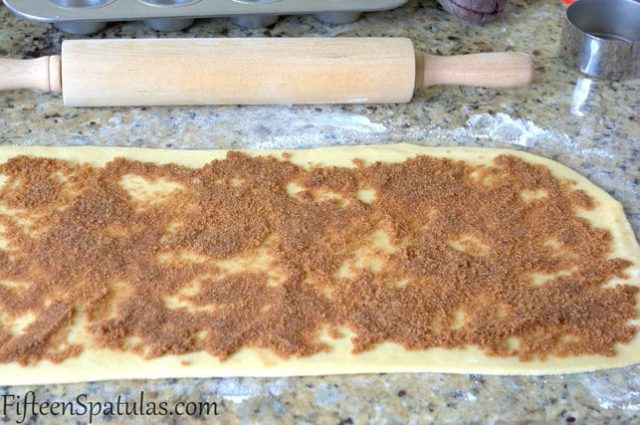 By the way, if you wanted to add extra pecans to the dough, chop 1/2 cup very finely, and sprinkle them on top of the cinnamon sugar.

Cut the dough into strips and roll each strip up tightly into a roll: 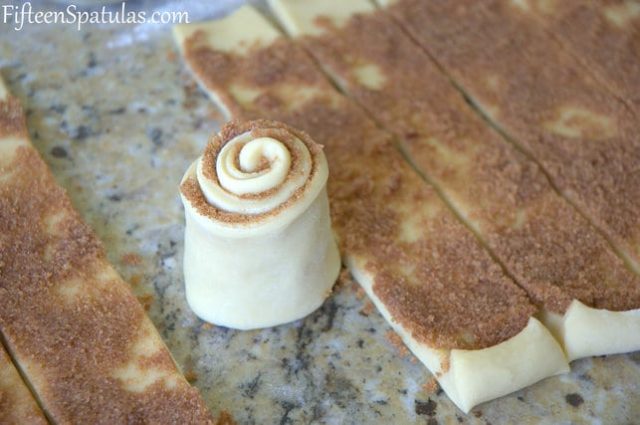 Nestle each roll into a muffin tin and let rise for about an hour: 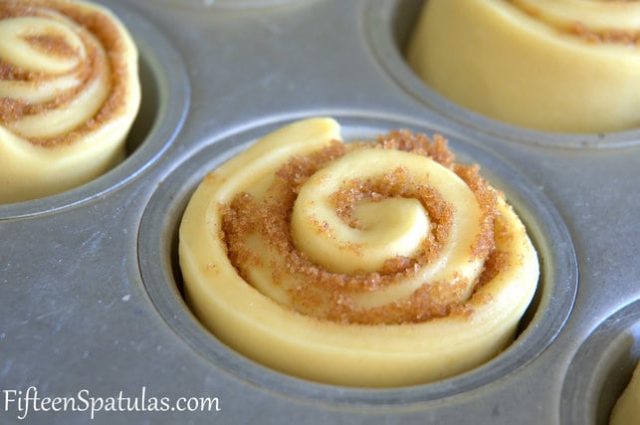 Most sticky buns aren’t baked in muffin tins, but I love the shape that it gives the buns.

Of course, if you prefer, you can bake them side-by-side in a quarter sheet pan instead (affiliate).

Then bake the sticky buns until they puff up and the cinnamon sugar gets sticky.

You can get a view of how it should look right here, with a sticky glazed bottom, and a golden color on top: 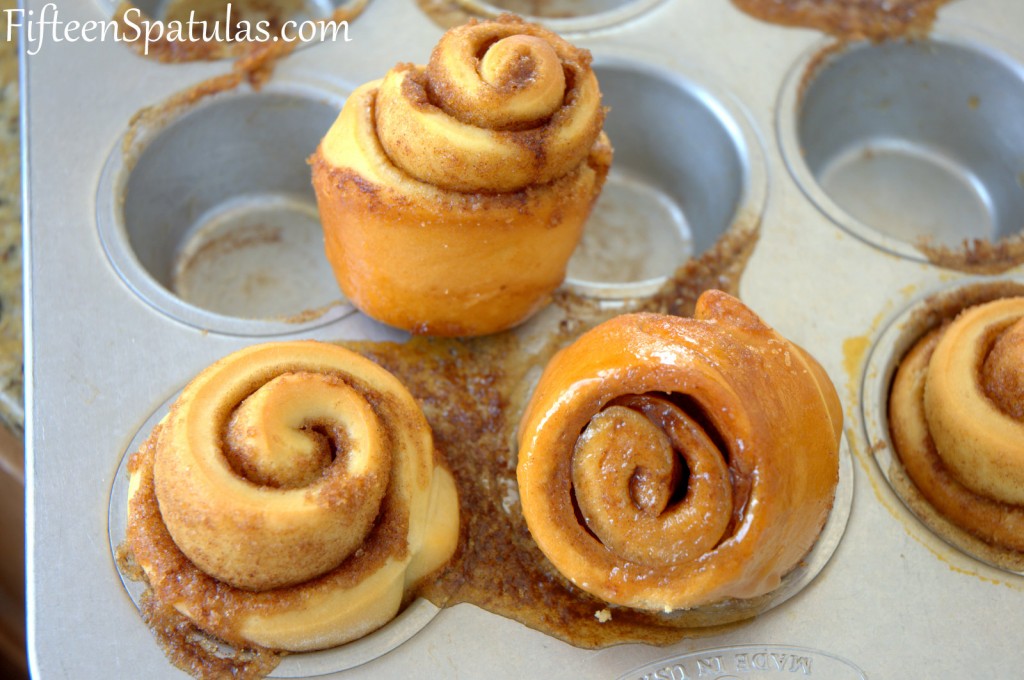 And then the fun part happens…you drizzle the sticky buns with butterscotch glaze, which is simply a handful of ingredients boiled together in a saucepan for about 5 minutes. 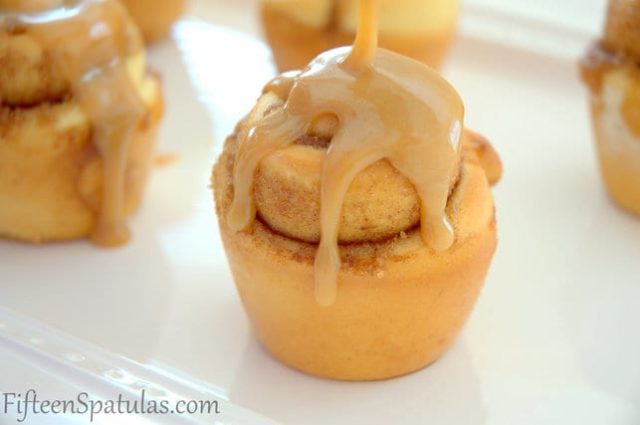 Let the glaze soak a little bit into the buns and top with chopped, toasted pecans. 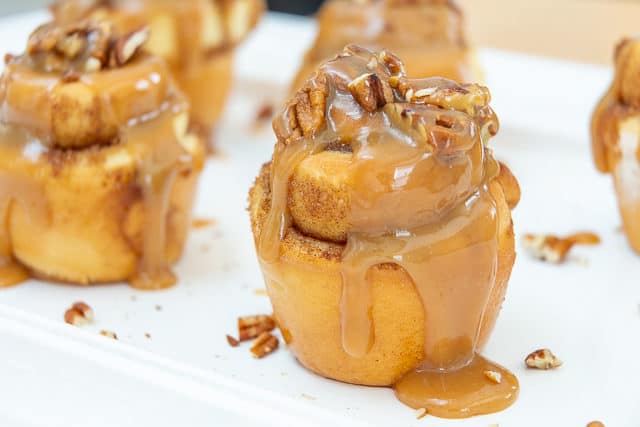 Crepes, English Style Scones, Dutch Baby Pancake, and this Granola Recipe are a few of my other favorite recipes to make for breakfast. Enjoy!

posted in: All Recent Posts, Breakfast and Brunch 31 comments