These Slow Cooker Asian Pork Tacos are fantastic for weeknight dinners. The pork only needs five minutes of prep before cooking low and slow in the crockpot, then the meat is shredded for taco time!

That’s not a surprise, given that there’s no high heat caramelization action in a slow cooker, and that can be very important. My Slow Cooker Short Ribs are truly flavorful and incredibly tender, but we do take the time to sear the beef ahead of time.

Case in point are the reviews for America’s Test Kitchen Slow Cooker Revolution Cookbook (affiliate), which have complaints that the recipes require you to sear or saute a lot of components before placing them in the slow cooker. Often that’s what it takes to have the best slow cooker dishes. They often aren’t “throw it in and turn it on” recipes.

This is a TRUE “Throw It In the Crockpot” Recipe

There’s no searing required here. This is a true “throw it in and turn it on” slow cooker recipe that’s actually good.

The reason it works is because the Asian flavors (soy sauce, hoisin, sesame oil, etc) are all pretty strong and flavor the pork nicely, and the final product is really helped by all the fresh ingredients going on here too: crunchy purple cabbage, shredded carrots, scallions, and cilantro.

The ease of this recipe makes it one of my favorites for weeknight dinners.

How to Make Asian Pork Tacos:

Stir to combine, then pour this all over a boneless center-cut pork loin roast:

You may also use pork shoulder, but it will have significantly more fat. Use whichever you prefer.

Use a brush to make sure the sauce is all over the surface of the pork:

Cook on low for 6-8 hours until tender, then shred the pork with forks:

Assembling the Tacos after Slow Cooking:

To make the tacos, spread some hoisin sauce on a corn tortilla:

Layer on the shredded pork:

It’s now ready to eat, enjoy, and repeat! Serve with Fried Rice to round out the meal! 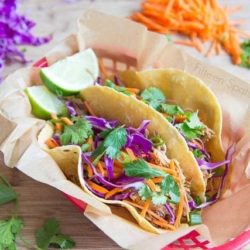 For the slow cooker pork:

For serving the tacos:

*The traditional cut of pork to use in this context is pork shoulder/pork butt, but it’s much more fatty. You may use that instead if you prefer more juiciness over leanness.