Kalbi is a classic Korean Barbeque Short Ribs dish, perfect for summer grilling, but perfectly suitable to make any time of year. This recipe has my Korean mama’s secret ingredient for extra tender short ribs! 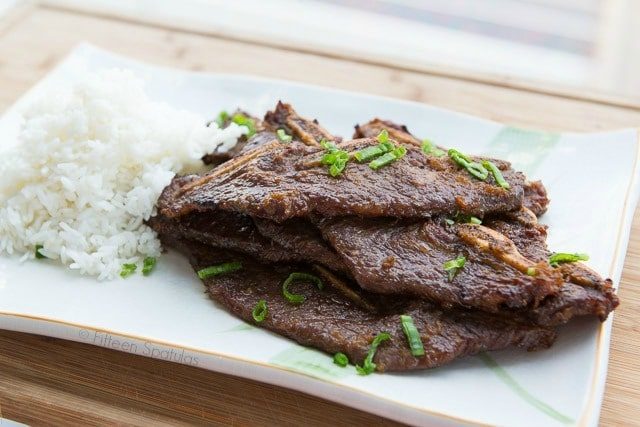 As Korean food has become more and more popular in the US, this dish has played a huge part in paving the way to that popularity. It’s one of the main staples of Korean BBQ, and people rightfully go bonkers over how good it is.

Korean kalbi is a special-cut beef short rib (often labeled Korean style short ribs) that’s marinated in a sweet and salty marinade, and grilled until caramelized and deeply brown. It’s the food of my childhood and something my Korean mama has made for me for years and years. Every time my mom threw a party, there would always be kalbi. Always.

And sometimes my mom would decide that we just needed to make and eat lots of kalbi, and she’d call it a party. Even when no one else was coming over. Haha 🙂 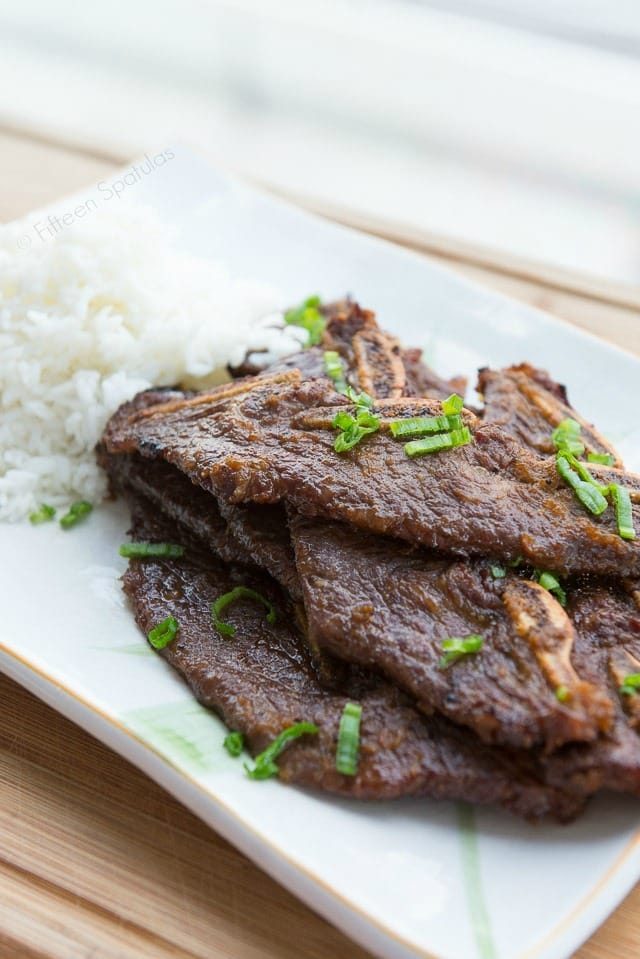 This recipe uses most of the standard ingredients for Kalbi, but also includes my mom’s secret ingredient, which helps tenderize the meat.

What is it? Kiwi!

But, she has also used pineapple. The secret to the kiwi and pineapple is the enzymes in them that tenderize the meat naturally. Just make sure not to leave the beef in the marinade too long, or the beef will be too tender.

How to Make Kalbi: 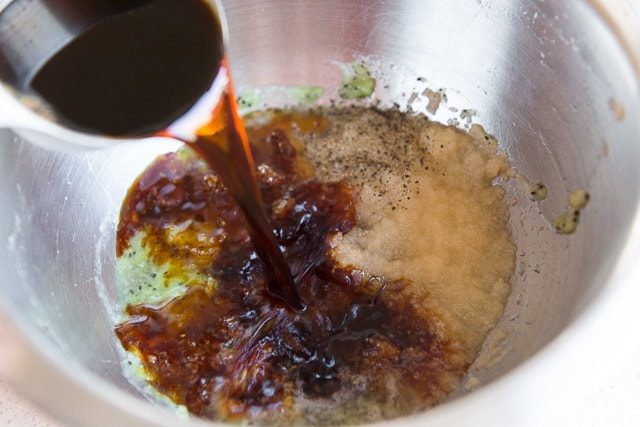 Mix this together, and then you have your marinade: 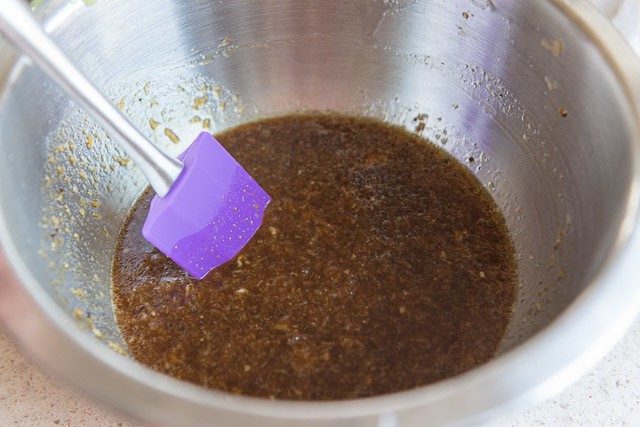 Now it’s time to grab your beef! These are Korean-style short ribs. They have three bones on the top and a couple inches of meat below. These are actually a little bit skimpier than normal, but nevertheless, you can see how beautifully marbled the meat is: 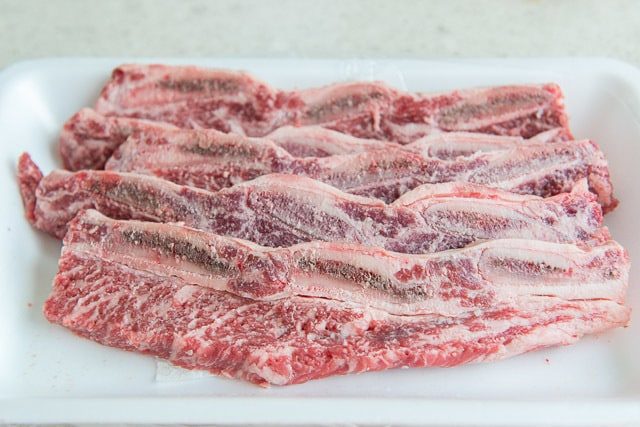 Combine the beef and marinade in a ziptop bag: 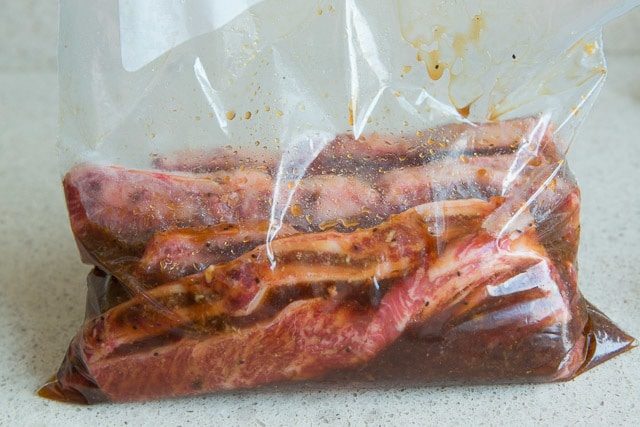 Marinate this for 4 hours, and as long as overnight.

Now it’s time to cook the beef! The preferred method is to grill them, but when that’s not an option, I’ve found that the second best method is to broil them.

Set the marinated beef on top of a wire rack on a sheet pan: 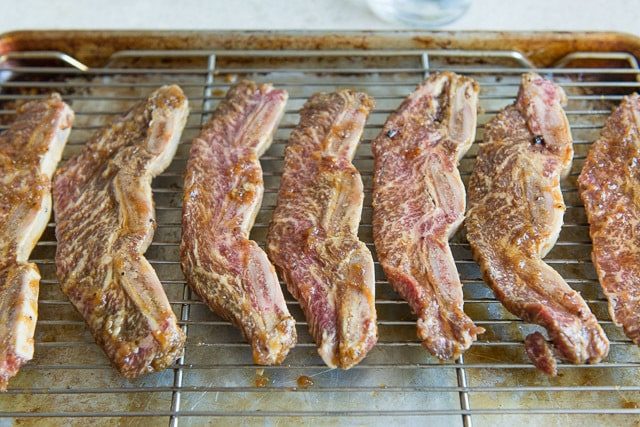 Broil on high heat for 3-4 minutes on each side, until they are deeply brown and caramelized: 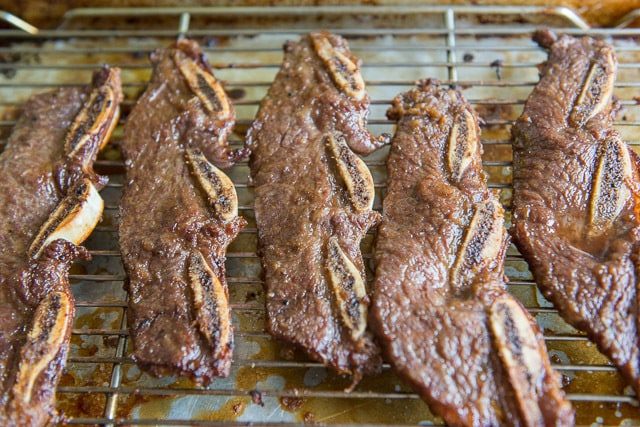 If that’s not an option either, you can pan-fry them, but they don’t caramelize as evenly. They’re still good though. 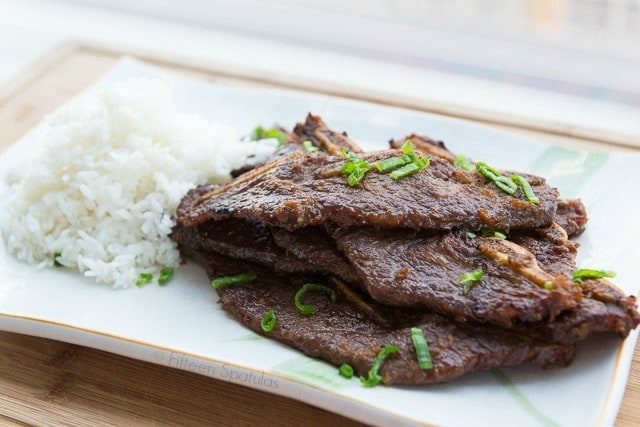 Serve the kalbi with rice, or any desired Korean side dishes. For more Korean dishes, I recommend my mom’s Kim Bap (Korean Rice Rolls) and Korean Beef Bites. 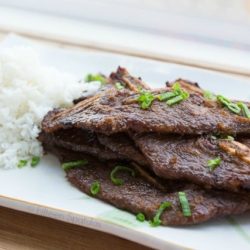