This Lobster Roll Recipe is a twist on the classic, with fresh flavor and crunch on top. Fresh lobster meat is nestled into a bun and sprinkled with a crunchy herb chip topping!

Even though lobster rolls may seem like more of a “going out” food, they are actually one of my favorite recipes to make at home. 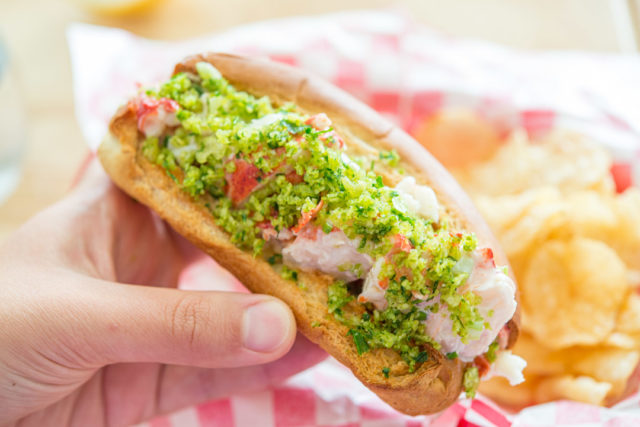 Lobster rolls are surprisingly easy to make, and though I’d never call lobster cheap, you save a lot of money making lobster rolls at home instead of ordering them out. During the summer, I’ve gotten fresh lobster on sale for as low as $5.99/lb!

That’s quite a difference when restaurant lobster rolls often run $16-18 per roll, and aren’t even using the best meat inside. 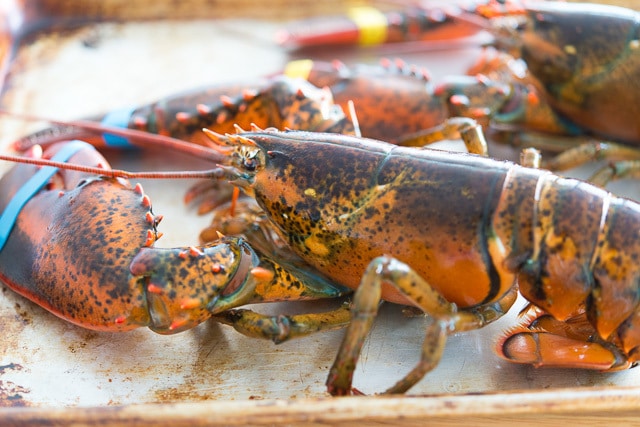 It was during my time living on the New England Coast that I really fell in love with lobster rolls, and got to try the multiple different styles that people prepare.

I prefer cold dressed lobster over hot buttered, and this version reflects that.

Recently I wanted to do something a little different with the lobster roll and the idea of adding crunch via potato chips popped into my head. You know, like how people put potato chips into a sandwich.

I thought that would be clunky here, so I thought, what if I ground potato chips up into a “dust” in the food processor?

I tested it out and added some herbs to add a wonderful fresh flavor, and I LOVED it. 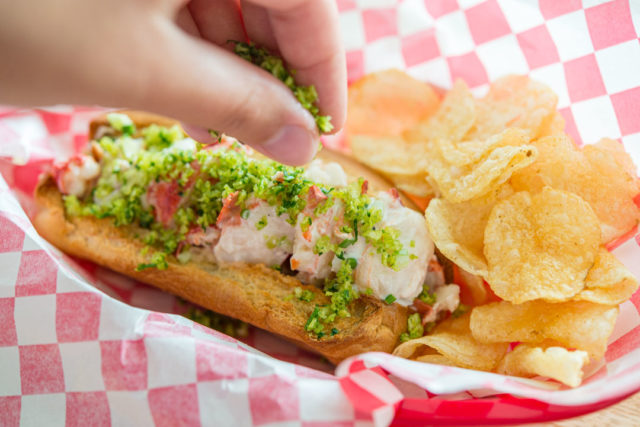 It reminds me so much of a gremolata! It adds bright flavor and texture to the lobster roll without stealing the show. 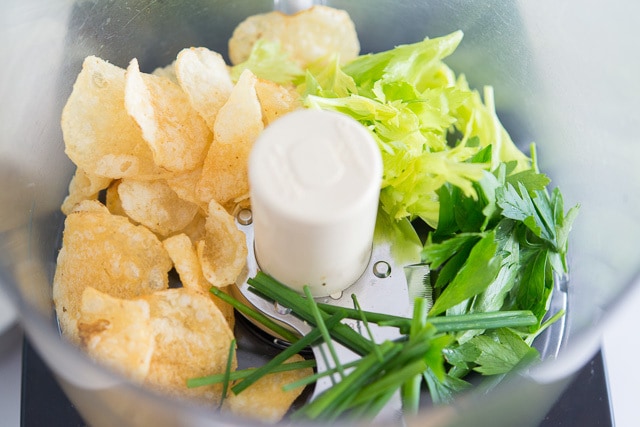 Pulse until the chips are broken down into small pieces, then season to taste with salt: 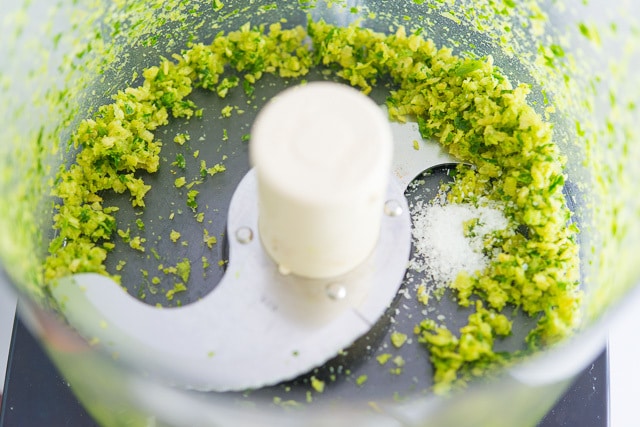 How to Make Lobster Roll Dressing: 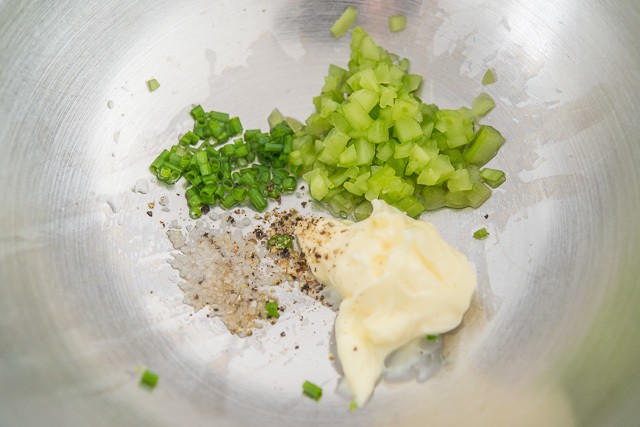 If you have 10 minutes to spare, I recommend using homemade mayonnaise for the best flavor.

How to Prepare Lobster:

Here’s how to get all the meat out of the lobster to use in a lobster roll.

First boil the lobsters (full instructions are in the recipe below), then separate the tail from the rest of the lobster: 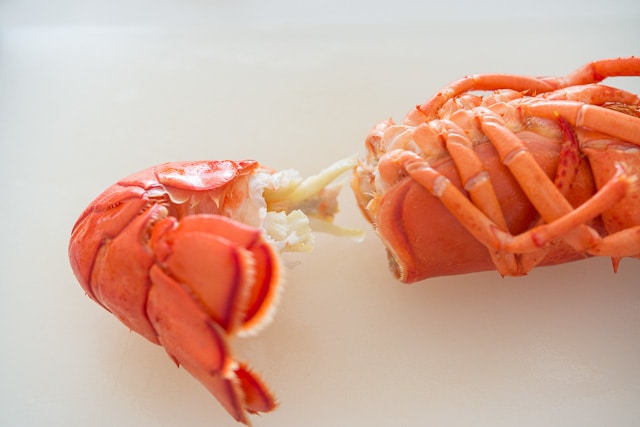 I find the easiest way to get the lobster tail meat out is to cut the shell with kitchen shears, so you can just pluck the meat right out: 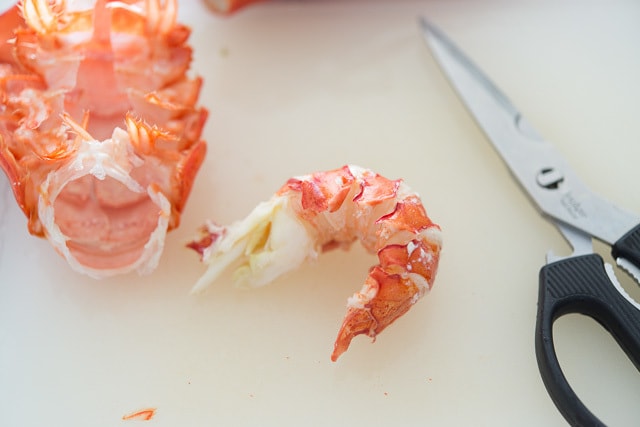 Then for the claws, you can use a lobster tool, but I just use the kitchen shears again to cut through and pull the meat out: 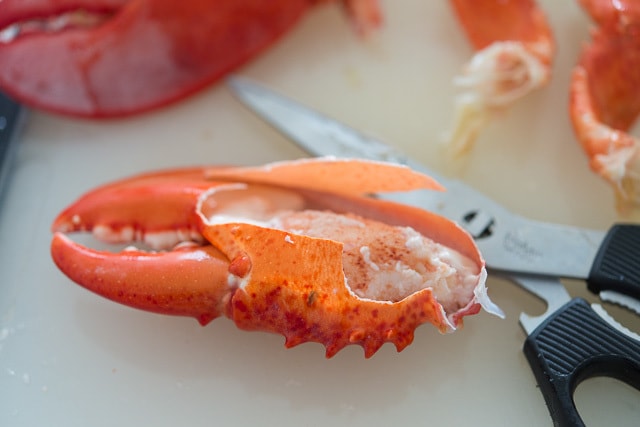 Once you’ve removed all the meat from the lobsters, you can cut it into bite sized pieces. 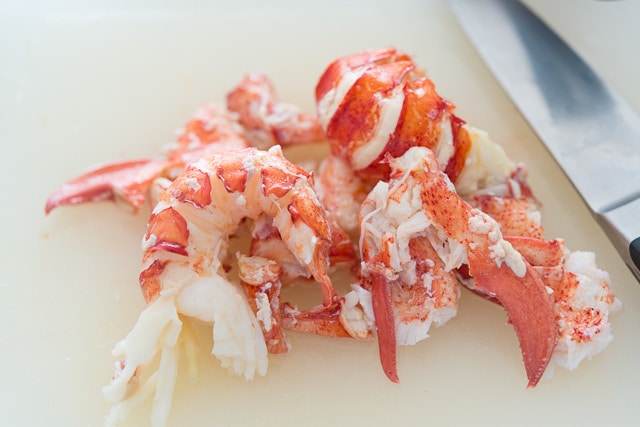 Toss the lobster meat with the dressing, and put it in a toasted bun with a sprinkle of the herbed potato chips on top: 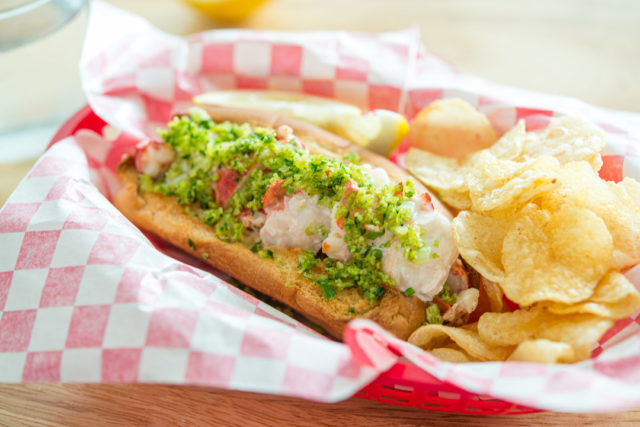 Fried Calamari, Chipotle Shrimp, and Seared Scallops are three more seafood recipes that I recommend for home cooking. You save so much money as compared to the restaurant. Enjoy!

How Many Lobster Rolls Per Pound: If you get 2 standard lobsters, about 3 pounds in total, you will have a generous amount of lobster meat filling for 3 lobster rolls.

Can you Save Leftover Lobster Rolls: Yes, you can refrigerate the dressed lobster meat for 2 days. I’d recommend a new bun, since those get soggy. 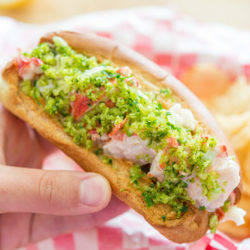 For the Potato Chip Dust:

For the Lobster Rolls:

*I cook lobster via the method I learned from Cook’s Illustrated. Freezing the lobsters puts them into a comalike state that makes it easier and safer to put them into the pot.

posted in: All Recent Posts, Dairy-free, Fish and Seafood 10 comments