This Homemade Sazon Seasoning is versatile and flavorful, all without any MSG, artificial colors, and anti-caking agents that you often find in storebought versions. I use this 6-ingredient rub once a week for pulled pork, fish, chicken, beef, beans and rice, and more!

I had no idea Sazon Seasoning was a thing until my foodie trip to Columbus several years ago, when North Market Spices sent me home with a packet of sazon to try. At first I had no idea what to do with it, but I decided to rub it onto some pork shoulder, popped into the slow cooker, and became hooked forever.

Since then I’ve sure been making up for lost time. No joke, this seasoning is always in my pantry now, and I make pulled pork with it at least once a week. I literally have some sazon seasoned pork in the slow cooker cooking right now, and I also enjoy it with other meats, potatoes, rice, and more. The flavor is incredible!

Use fresh spices – Spices, especially ground spices, tend to lose their flavor rapidly as they sit in the pantry. The general rule of thumb is that they will stay potently fresh for 3 to 6 months after opening. They won’t necessarily be “bad” at that point, but less flavorful. So try to use freshly purchased spices here for optimal flavor.

Store in an airtight container – A glass jar or container is my favorite for keeping air and moisture out of the sazon seasoning. I don’t recommend a ziptop plastic bag, because they tend to puncture easily and can be too breathable.

If you’re not familiar with this magical spice mix, it’s a staple of Latin cooking. North Market Spices’ ingredients list for it is: Annatto, Garlic, Salt, Cumin, Black Pepper, Coriander, and Oregano. For my final version after many rounds of tweaking and testing, I mostly stuck with this mix of spices, with a few minor changes.

I found I like adding a little bit of onion powder to the mix, and I also like making the actual sazon seasoning without salt or pepper. This comes from a personal preference of seasoning the meat separately since it’s hard to tell how much salt is going on when there’s salt already mixed in. I do this with all my homemade seasonings, whether it’s Cajun Seasoning, Fajita Seasoning, Taco Seasoning, or Everything Bagel Seasoning.

I’ve developed a knack for knowing how much salt and pepper to add to meat just by eyeing it, but a good rule of thumb to start with is 3/4 tsp of salt per pound of meat. That number will vary based on the salt you’re using, and personal taste. But it’s easiest to calculate when you know you don’t have to factor in extra salt in the seasoning.

If you’re not familiar with it, annatto is a seed from the fruit of the achiote tree, that’s ground and often used as a dye. I first discovered it a few years ago when I noticed it as a common ingredient in cheddar cheese. But annatto isn’t just for color. It has a distinct flavor too, that has a warm and earthy taste.

As far as using the sazon seasoning for pulled pork, I simply rub a few tablespoons all over a boneless, tied pork shoulder, season with salt and pepper, then throw it into the slow cooker on low for about 8 hours, per my Slow Cooker Pulled Pork method (or I add it to this Smoked Pork Butt).

Then you can shred the meat and toss it back into the juices.

Ways to Use It

Sazon Seasoning is incredibly versatile. Here are some of the ways I use it in my own kitchen.

Meats: It’s great not just for pork of any kind (try it on Carnitas), but also pretty much all other meats, but especially steaks like Grilled Ribeye. Also try rubbing it on Santa Maria Tri Tip or a Reverse Sear Prime Rib. Sazon spice also works well for poultry like Spatchcock Chicken and Crockpot Chicken Breast.

Rice: Add a tablespoon to your next batch of Mexican Rice or even Arroz Con Pollo.

I hope you give this magical seasoning mix a try. I really love keeping it on hand!

For those who would rather buy it than make it, I saw that North Market Spices has an online shop to buy it. I don’t recommend the typical grocery store brands, which have MSG and artificial colors and ingredients in them. It’s so easy to mix some up yourself.

How do you store Sazon Seasoning?

Keep in an airtight container at room temperature for up to 6 months. It won’t necessarily be “bad” after this, but the flavors will not be as potent. I recommend a glass jar or container.

Where do you get the ground annatto?

It isn’t always available in grocery stores, though groceries with Latin foods tend to have it. I order mine online. Amazon has plenty of choices for only a few dollars (like this one – affiliate), and I usually get Badia brand. Ground annatto sometimes goes by the name “achiote.” 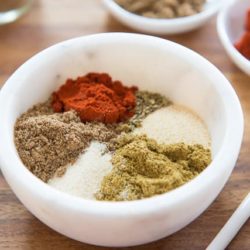 Servings: 5 tbsp
Prep Time: 5 mins
Total Time: 5 mins
This Homemade Sazon Seasoning combines a handful of simple spices for a mix that’s versatile and flavorful. I use it once a week for pulled pork, and it’s also great with fish, chicken, beef, beans and rice, and more!
Print Recipe Pin Recipe
58
reviews
Leave a Review »

*This is the one spice that your local grocery may not carry. I usually have to order it online. Amazon has many choices for only a few dollars (like this one). Some people substitute turmeric in place of annatto, and while I don’t think it’s a similar flavor, the mix does taste delicious with turmeric substituted in. Storage: Keep in an airtight container at room temperature for up to 6 months. It won’t necessarily be “bad” after this, but the flavors will not be as potent. I recommend a glass jar or container. Scaling: Feel free to double or triple the batch as you like.