This Cinnamon Raisin Bread is one of the simplest breads you can make at home from scratch, and it’s loaded with wonderful cinnamon flavor and juicy raisins. It’s completely free of preservatives and dough conditioners, and is wonderful simply sliced or toasted with butter.

Homemade bread takes a bit of work and time, but to me it’s always worth it. I’d rather make my own instead of buying one of those 3-week shelf stable loaves that has 50 unpronounceable ingredients instead of 5. What I do to make things easier is have a “bread baking day” from time to time where I’ll bake several different loaves at once, then store them in the freezer. It lasts me quite a while.

To those who read my Apple Pie Panini post, this is my recipe for Homemade Cinnamon Swirl Raisin Bread that I used for the sandwich. This cinnamon raisin bread is adapted from my plain sandwich bread post. If you’re not a fan of raisins, feel free to leave them out and simply enjoy the cinnamon swirl. It won’t affect the baking results at all!

Resist the urge to add more flour – The more flour you add, the denser your cinnamon raisin bread will be. This is true of all bread. The dough here will be slightly sticky, but this is what gives us a lighter crumb, so be mindful about adding more flour.

Don’t rush the initial rise – You will need about an hour for the dough to double in size, but if your kitchen is cool, it could potentially need two hours. Be patient. This is the time the yeast needs to put the gas bubbles in the dough, which helps the end result be lighter rather than denser.

Get the good cinnamon – Ground cinnamon varies hugely in quality and potency, and ideally you want a good quality Ceylon cinnamon for this so the aroma and flavor really sing. My absolute favorite is King Arthur Flour’s Vietnamese cinnamon.

Start by stirring together milk, butter, yeast, and a little honey, and let it sit for 10 minutes until foamy:

Combine this liquid with all-purpose flour, eggs, salt, and raisins in the bowl of a stand mixer, and knead with the dough hook for 10 minutes:

Go Fancy with the Raisins

This recipe works great with the standard, smaller raisins that you find at any grocery store. However, feel free to go fancy with the raisins if you’d like! You can try a medley, use jumbo golden or flame raisins, or whatever variety you prefer. Trader Joe’s has some great choices.

Let this soft, sticky dough double in size, covered, which should take an hour or two (and if your kitchen is as cold as mine is right now, it will take two)!

Once the dough has risen, it should look stretchy and strand-like, like this:

Remove the dough and stretch it out into a rectangle on a lightly floured board, trying to add as little flour as possible:

Make the cinnamon filling by mixing together melted butter, brown sugar, and tons of good cinnamon:

Spread the cinnamon filling all over the rectangle, then tightly roll it up:

Pinch the seam shut at the end, then place the dough roll in a standard butter-greased 9×5 loaf pan:

Cover the pan with plastic wrap and let the dough rise for about an hour, until it rises above the top of the pan:

Into the oven it goes until it comes out golden brown on the top:

After baking, let the bread cool completely on a wire rack before slicing it. If you slice into it too early, the bread will not cut as cleanly, and it may be gummier than it should be on the inside. The cooling stage is an essential part of the process.

Once the Cinnamon Raisin Bread has cooled, you can slice it up and eat it toasted with butter, or make this glorious Apple Pie Panini with it. When I have it, I like spreading it with Homemade Orange Honey Butter.

You may also use this bread for Bread Pudding, Bananas Foster French Toast, or sandwiches.

Homemade English Muffins, Homemade Cornbread, and Pumpkin Muffins are a few of my other favorite recipes to bake. Enjoy!

How do you store Cinnamon Raisin Bread?

Keep in an airtight container at room temperature for up to 2 days, in the fridge for 10 days, or in the freezer for 3 months.

How do you freeze Cinnamon Raisin Bread?

Store in an airtight container for up to 3 months. To thaw, leave in the fridge overnight, or on the counter for 1 to 2 hours.

How do you reheat Cinnamon Raisin Bread?

The toaster is best, cut in slices. However, you may also re-warm the whole loaf in a 300F oven for about 10 minutes, until warmed through. 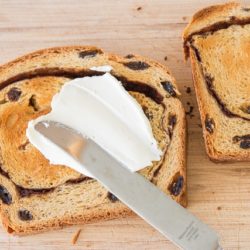 For the cinnamon filling:

*For a less dense loaf, do 17.5 oz flour, as specified. However you may use up to 20 oz if you’re making this by hand and you want the dough to be easier to work with, however the loaf will be denser.  **Raisins: Feel free to go fancy with the raisins. You can try a medley, use jumbo golden or flame raisins, or whatever variety you like. ***Cinnamon: Ground cinnamon varies hugely in quality and potency. Try to use a quality Ceylon cinnamon. I like King Arthur Flour’s Vietnamese cinnamon. ****You can also warm the liquid on the stovetop in a small pot. Storage: Keep in an airtight container at room temperature for up to 2 days, in the fridge for 10 days, or in the freezer for 3 months. Freezing: Store in an airtight container for up to 3 months. To thaw, leave in the fridge overnight, or on the counter for 1 to 2 hours. Reheating: The toaster is best, cut in slices. However, you may also re-warm the whole loaf in a 300F oven for about 10 minutes, until warmed through.