Think of this Green Spaghetti as like a spicy poblano alfredo pasta. My friend Sara, a Texas native, taught me how to make this popular Texan dish. It’s comfort food with equal parts creaminess, kick and flavor. Make it in just about a half hour!

One of the best parts about food is getting to taste things you’ve never had before. And until I met my friend Sara in 2010, I had never even heard of Green Spaghetti, let alone tasted it.

For those who haven’t tried this before, to me Green Spaghetti is sort of like a spicy alfredo pasta, but instead of cheese, the main flavors come from roasted poblano chiles and fresh cilantro. The dairy helps soften the heat and spice from the peppers.

I’ve made and tweaked this recipe from time to time ever since Sara taught me to make it, basically anytime I can find some good-looking poblano peppers at the grocery. With that said, know that poblano peppers aren’t always available, and this is an ingredient that can’t really be substituted. I mean sure, you could use other peppers, but the flavor won’t be the same. The poblano peppers have a unique flavor that is essential for this dish, so try to track them down.

Really blacken the heck out of the peppers – You will need to cook the poblano peppers until they’re really blackened and blistered on the outside. You can do this in the oven using the broiler, or on a gas range or grill. This is important for the best flavor and the right texture.

Wear gloves for safety – While not essential, if you’re someone who wears contact lenses, I highly recommend wearing gloves when handling the peppers. Poblanos are shockingly spicy.

Don’t overcook or underseason the noodles – Make sure to keep the spaghetti al dente and not overcook them, and also take the time to salt the pasta water properly so that the noodles are seasoned on the inside.

To begin our Green Spaghetti, we’ll need to blacken and blister the poblano peppers. You may do this in the oven with the broiler, on a gas stovetop, or outside on a gas grill.

For the oven method, wash four poblano peppers and place them on a sheet pan:

Place them under the broiler for about 10 minutes, turning them over at least once during cooking to make sure they’re completely blackened and soft.

By the end, the peppers should be completely collapsed, as you can see when I squish one with my tongs:

If you have a gas grill or stovetop, you can alternatively roast the peppers directly over the flame or on the grates, turning the peppers as they collapse and blister.

Place the charred poblano peppers in a bowl, and cover TIGHTLY with plastic wrap. You really want to trap the steam in, which you can see here:

Peel the blackened skin from the chiles (I recommend wearing disposable gloves – affiliate), and also remove the seeds, stems, and any visible ribs. Be thorough about it, because believe me, even without these parts, the poblanos are spicy. Removing the seeds and any visible ribs really cuts down on the heat.

Place the peeled poblanos in a blender, along with garlic, cream cheese, and chicken stock:

Next add fresh cilantro (I do the stems and leaves), heavy whipping cream, and salt:

Blend it all up until smooth.

Finally, cook some spaghetti in salted water, according to package directions to al dente. This means you cook them until they’re tender but still have a bit of resistance when you bite into them. They shouldn’t be mushy. I also make sure to taste the pasta water before adding the noodles, to make sure the saltiness is right. It should be salty enough that it tastes like ocean water, meaning a little repulsively salty.

Toss the al dente noodles with a few pats of butter:

Then pour the cilantro poblano sauce all over the buttered noodles:

Toss well to combine, and keep in mind that even if it seems like too much liquid at first, the pasta will soak it up as it sits, and the sauce will get thicker.

Plate and garnish the green spaghetti with extra chopped cilantro on top! I also find that a little bit of crumbled queso fresco or cotija cheese can be a really nice touch.

This can definitely be enjoyed on its own, but to round out the meal I like to serve a meat too, like Carnitas, Smoked Pork Butt, or Slow Cooker Pulled Pork. There’s something about pork that goes beautifully here.

How do you store leftover Green Spaghetti?

Can you freeze leftover Green Spaghetti?

Technically yes, but I don’t recommend it, as the texture is inferior due to the dairy, and the “fresh factor” of the cilantro isn’t as good.

How do you reheat Green Spaghetti?

This is a recipe that takes well to the microwave. Keep it covered so it doesn’t dry out. Timing will depend on amount, but try about a minute for a one-person serving.

Can you use other peppers here?

Poblanos are undoubtedly the best and have a unique flavor that can’t really be replaced. But you can try other types of peppers here as well, like green peppers with jalapeños. 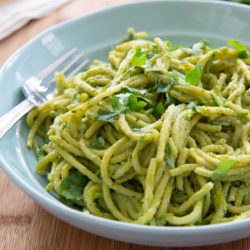 *I add the cilantro stems to the blender too. Just trim off and discard the bottoms first so it’s fresh. Storing leftovers: Keep in an airtight container in the fridge for up to 5 days. Freezing: I don’t recommend it, as the texture is inferior due to the dairy, and the “fresh factor” of the cilantro isn’t as good. Reheating: This is a recipe that takes well to the microwave. Keep it covered so it doesn’t dry out. Timing will depend on amount, but try about a minute for a one-person serving.

posted in: All Recent Posts, Pasta, Rice, and Starches 22 comments