Freshly made dulce de leche is layered into a gingersnap cookie crust and topped with sliced bananas and freshly whipped cream. This Banoffee Pie is a rich and satisfying dessert!

My opinion on dessert has always been to go all out, or don’t even bother.

“Skinny-fying” sweets has never left me satisfied, to the point where eating slimmed down desserts is counterproductive.

Today’s dessert goes all out, and is rich, flavorful, and bold. 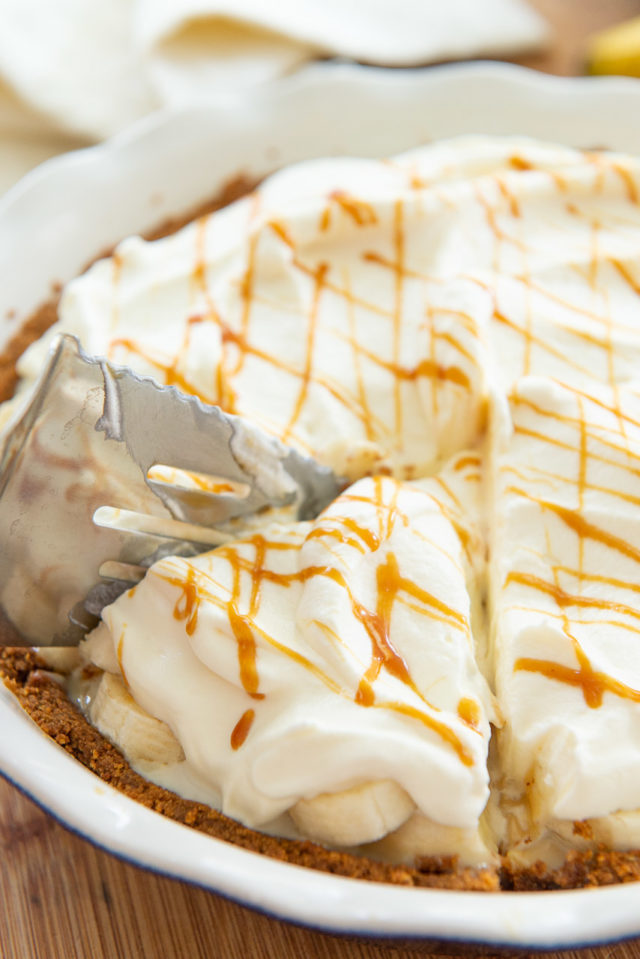 If the name “Banoffee” strikes you as a little strange, that’s because it’s not really a word. It’s a mashup of bananas and toffee, though dulce de leche is the commonly used ingredient for that caramelized flavor.

This pie is incredibly simple, and is one of those instances where the perfect combination of a couple ingredients results in something spectacular.

You get multiple different textures and flavors at once. I kind of hate the “party in your mouth” phrase but even I can admit that here it totally applies. It’s so good!

How to Make Banoffee Pie:

If you can find store-bought dulce de leche, feel free to use that. I’ve never seen it at any of the stores I shop at, but fortunately it’s really easy to make it yourself.

For the safest method, pour sweetened condensed milk into a double boiler setup, which is just a heatproof glass bowl on top of a saucepan that’s filled with an inch or two of simmering water: 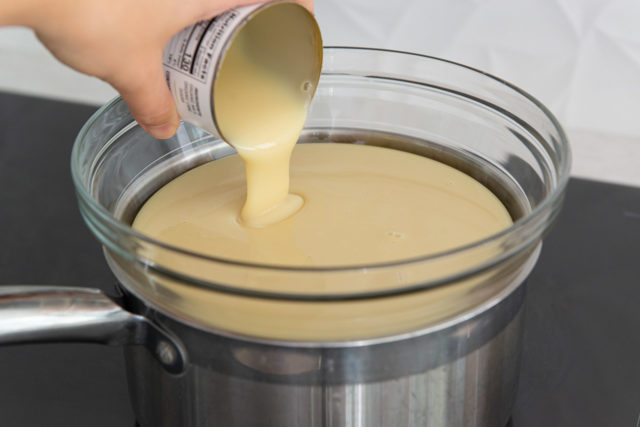 The good news is this method is fairly hands off, as it only needs to be stirred every hour, but it will take 3 hours for it to get dark and thick.

I have gotten away with cooking dulce de leche in a nonstick pan and stirring constantly over medium-ish heat for 15 minutes, but it’s really easy to scorch the milk and mess it all up. So, the patient way is best.

Make the Crust with Gingersnaps instead of Graham Crackers:

The crust we’ll make is a ground cookie crumb crust, akin to a standard Graham Cracker Crust, but with gingersnaps instead.

It’s standard to use graham crackers, but the gingersnaps are SOOOOOO much better here.

The gingersnaps are bolder and have more spice to them, and they’re super compatible with the other flavors in the pie.

Tip: If you can, try to get the triple gingersnaps from Trader Joe’s that have pieces of candied ginger in them. But any brand will work here!

Grind up the gingersnap cookies in a food processor (or crush it up in a ziptop bag using a rolling pan), then add melted butter: 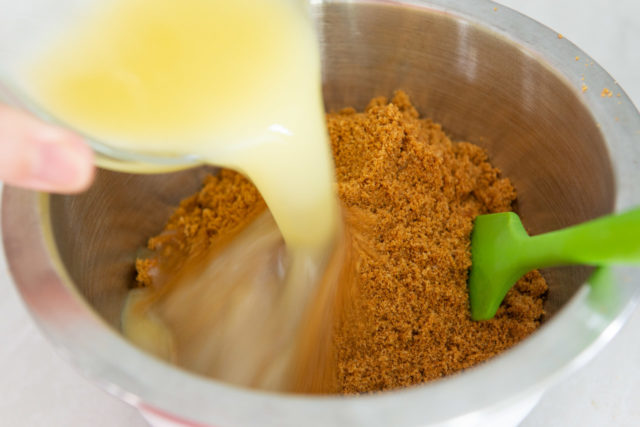 Toss everything around to distribute the butter and evenly moisten the cookie crumbs: 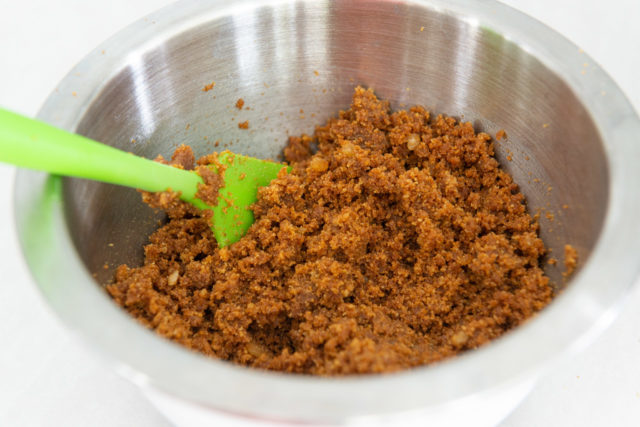 Dump the crumbs into a 9″ pie plate (I bought the Emile Henry one, which I love, affiliate), then press very firmly using your fingertips and a measuring cup: 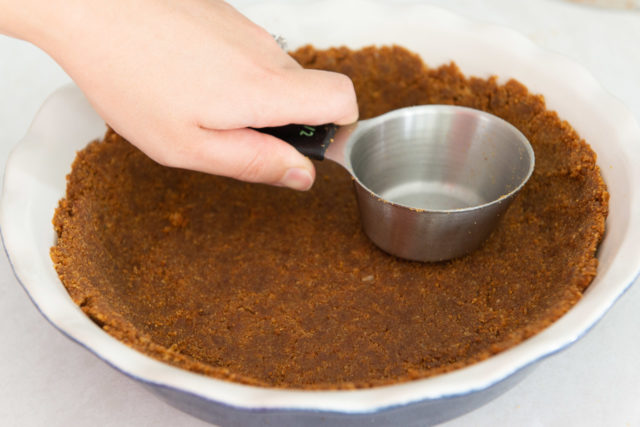 Compacting the crumbs well now will help the crust hold together better later.

Bake the pie for 10 minutes to let it set, then let it cool on a wire rack. 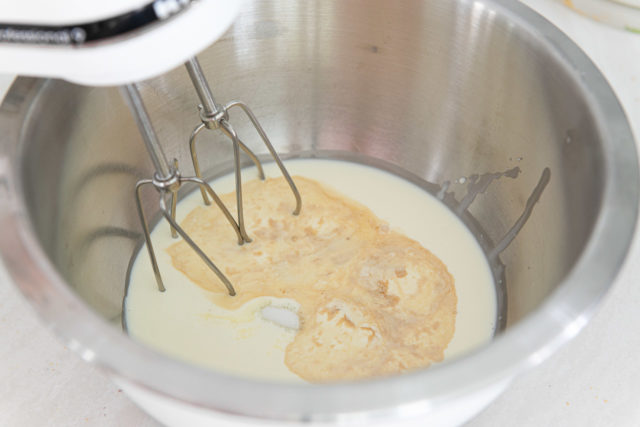 Use a hand mixer to whip to soft peaks: 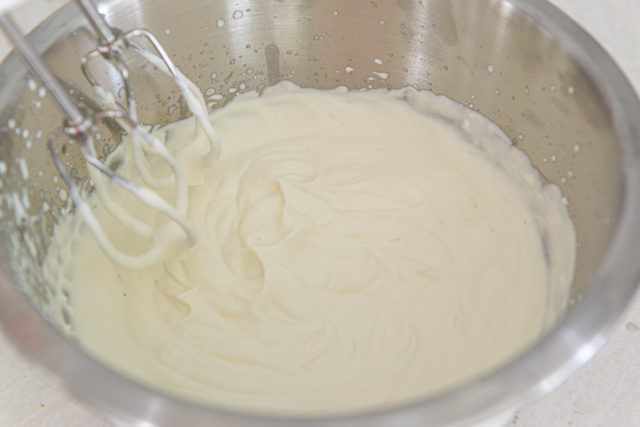 Keep it in the fridge until you’re ready for it.

Once the crust has cooled, spoon in the dulce de leche: 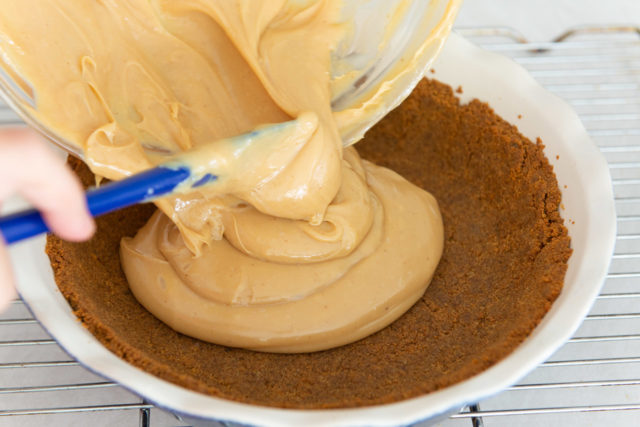 You can see how thick and dark it gets from cooking!

Spread it out evenly, then layer on freshly sliced bananas: 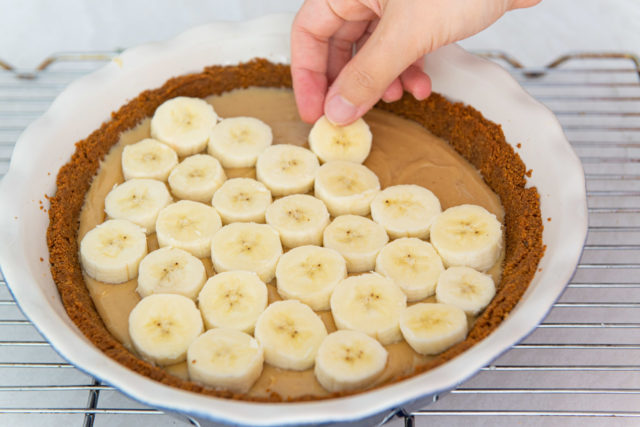 I do a double layer of bananas. Be generous with them!

Then, spread the chantilly cream on top: 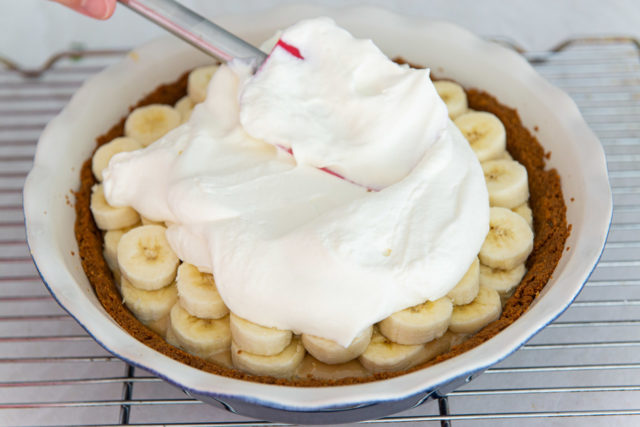 Chill the pie for an hour, which will help firm up the pie and make it easier to slice and serve later. You can also make the pie up to 8 hours ahead of time and keep it uncovered in the fridge.

Before serving, I drizzle the top with caramel sauce: 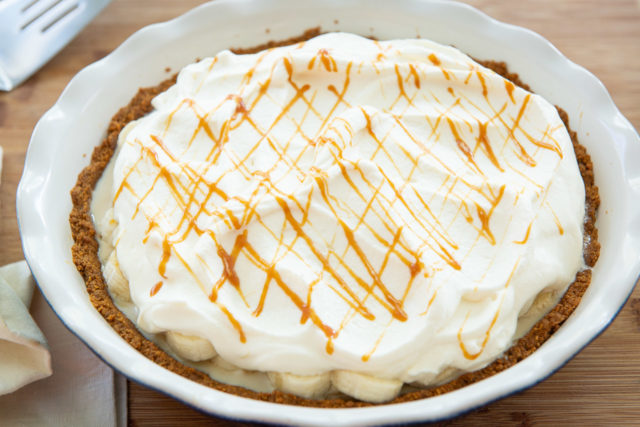 Totally optional, but I love the look! I tend not to do dulce de leche on top because it’s so thick, and is tougher to drizzle.

It is also common to top the pie with chocolate shavings, but I personally don’t think the chocolate flavor is compatible to the flavors here.

Here’s an inside view of the pie, also with more caramel on top: 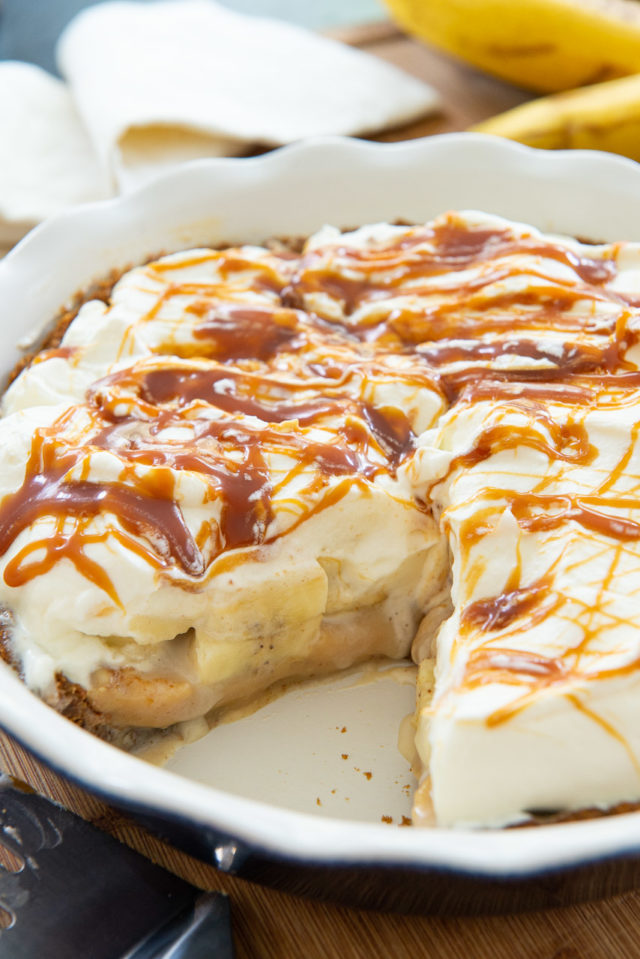 It’s kind of a mess, but a totally delicious mess. Millionaire’s Shortbread is another dulce de leche dessert I love. Enjoy!

More Pie and Tart Recipes That I Love: 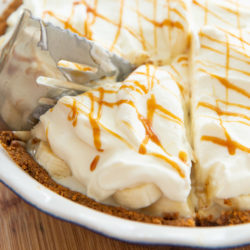 For the banoffee pie:

Thank you! You have successfully subscribed to Fifteen Spatulas new posts notifications.
« Previous PostTurkey Chili
Next Post » Chicken with Forty Cloves of Garlic