This classic Spinach Artichoke Spread is thicker than a dip, and perfect for spreading on crusty bread. It’s full of fresh cooked spinach and artichoke hearts, and has lots of salty, sharp pecorino romano cheese. It’s a fantastic appetizer!

I think spinach artichoke dip is one of the best things on the planet, evidenced by the fact that I ate this for four days straight until it was gone, every morning for breakfast.  Little toasted pieces of baguette spread with this delicious stuff, and a fried egg.  This is actually somewhere between a spread and a dip, so whether or not you serve with toasted baguette or crackers is up to you.  One key to making good spinach artichoke dip is to use fresh spinach.  Frozen spinach to me is repulsive, and it only takes a couple minutes to saute some fresh baby spinach leaves. 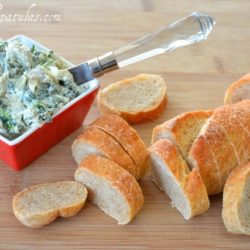