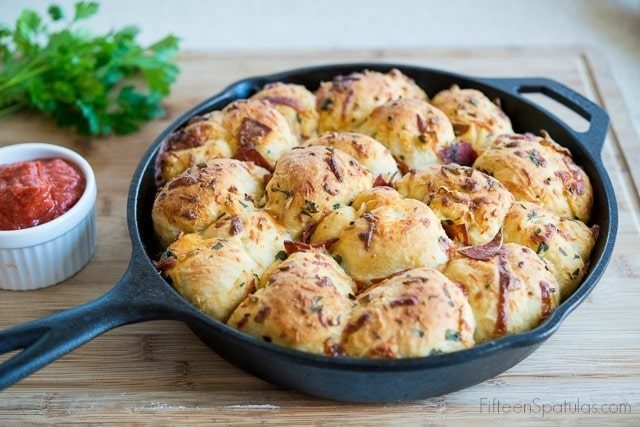 Garlic Knots are no stranger to this site, and these Parsley Butter Brushed Garlic Knots and Super Fluffy Jumbo Garlic Knots are some of the earlier recipes that I’ve ever posted here. I’ve always had a thing for bread and pizza, and I have my older brother Andrew to thank for that. My family has literally been calling him the “Bread Beast” and “Pizza Monster” since he was a little boy. You know, in the most loving way, of course, haha!

For this recipe, you take the same garlic knot pizza dough from this post, but instead of spreading them out onto a baking sheet, you cram them into a skillet or a baking dish with some fried pepperoni, garlic, herbs, and mozzarella. It’s a kind of mock skillet pull bread that is part garlic knot and part fluffy roll. 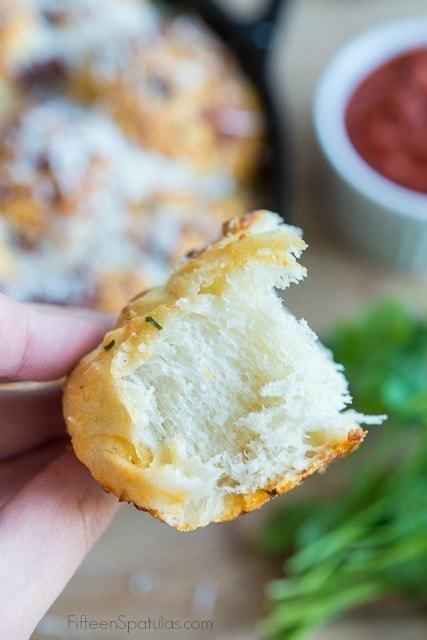 And, you can change up the mix-in ingredients as you’d like. Another one I like to make is with crumbled hot Italian sausage and sauteed mushrooms, instead of the pepperoni. Feel free to mix in lots of different ingredients!

To get started, combine warm water, yeast, and a tiny bit of sugar in the bowl of a stand mixer, and let it sit for 10 minutes until foamy: 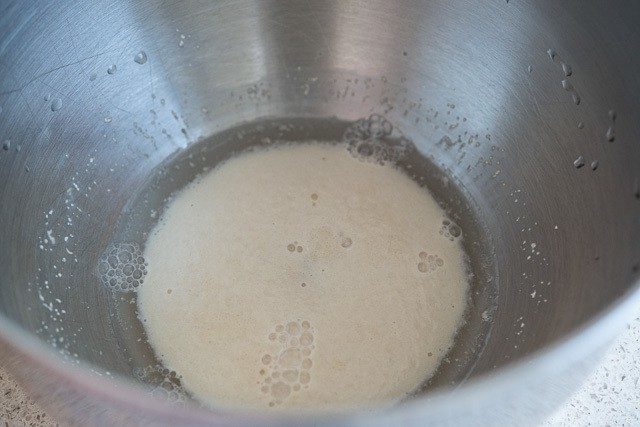 When the mixture gets foamy, it means the yeast is alive and well! Let’s proceed.

Add bread flour, salt, and olive oil to the wet ingredients, and use the dough hook to roughly combine: 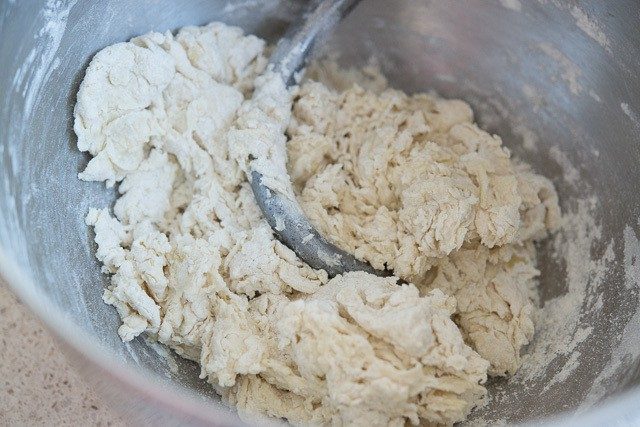 Attach the bowl to the mixer and knead with the dough hook for about 10 minutes, until smooth: 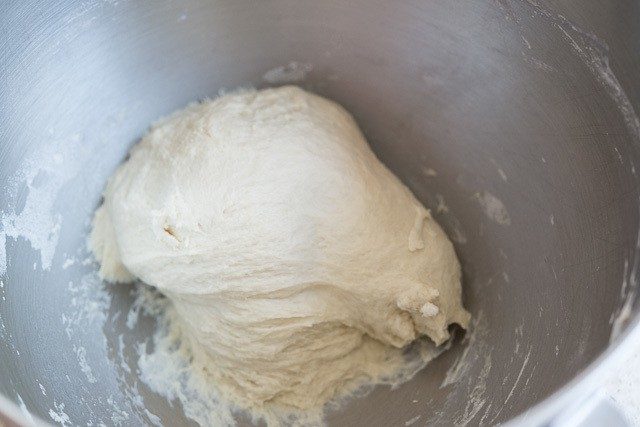 Cover the bowl and let the dough rise for about an hour. 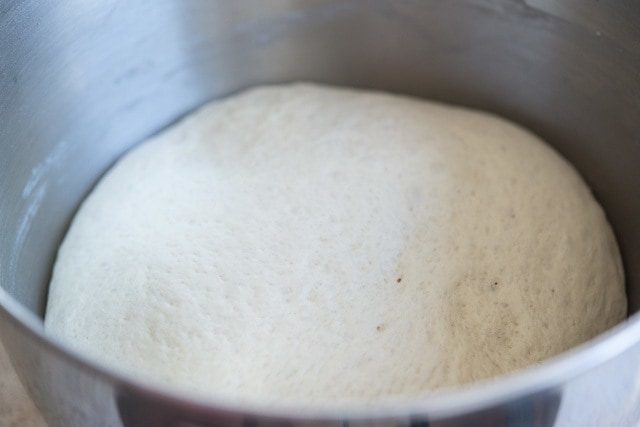 Roll the dough into a rectangle and divide it into 16 strips: 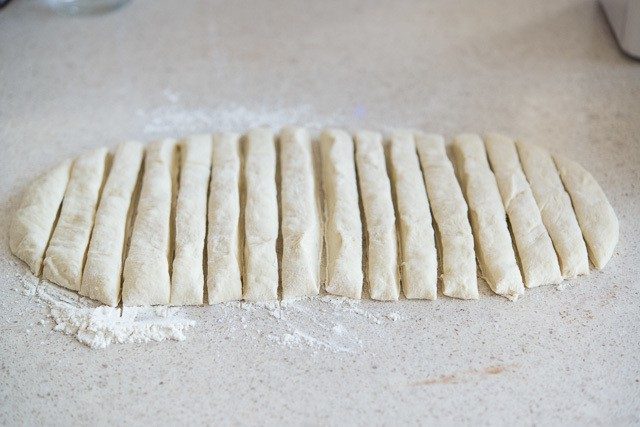 Now let the dough rest while you prep the mix-in ingredients.

Fry pepperoni in a touch of olive oil for a couple minutes until crispy, then add tons of minced garlic and red pepper flakes: 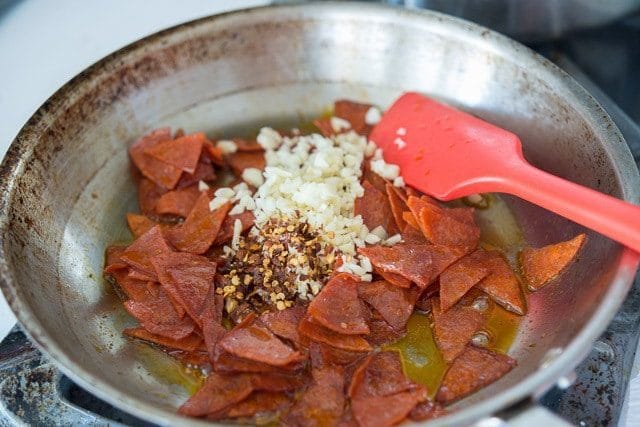 Toss that around for a minute, then pour into a large bowl. Add parsley and mozzarella cheese: 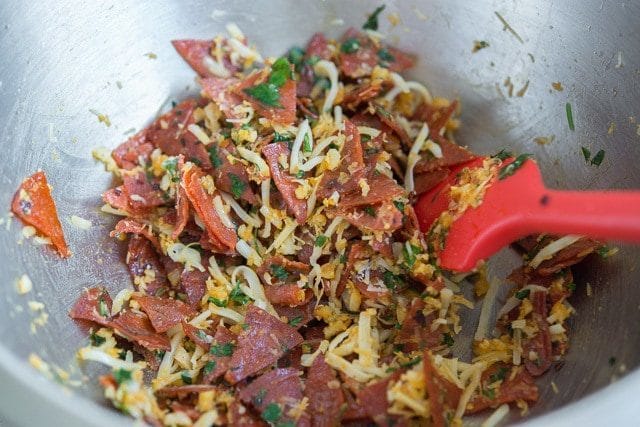 Tie all the dough strips into knots (take a look at this post if you don’t know how, but it’s just a simple knot), then toss them in the pepperoni bowl: 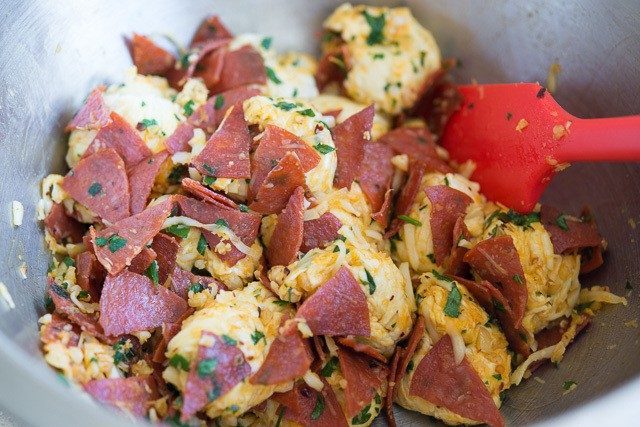 Pour everything into a 12” cast-iron skillet or an 8×11 baking dish: 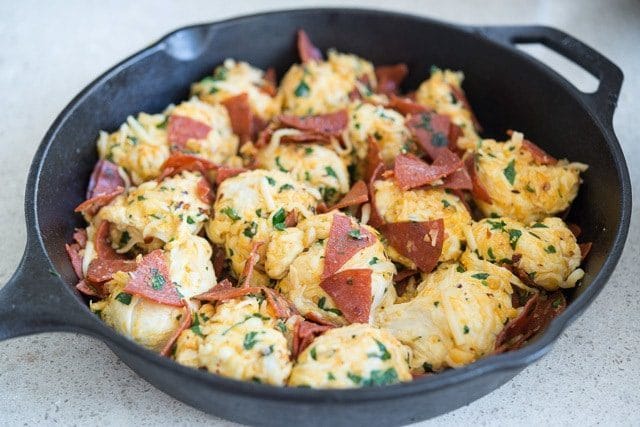 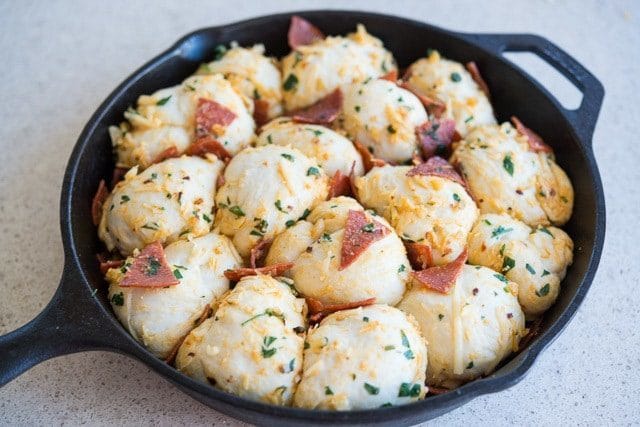 Now the pizza bread is ready for a hot oven, where the dough will puff up and brown.

Serve the bread warm, and this is optional, but I like to pull a jar of marinara sauce from the pantry to dip the knots in: 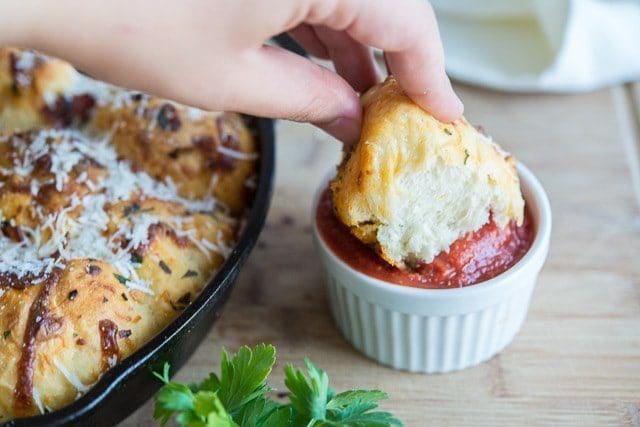 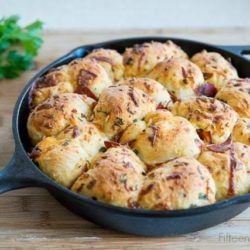 For the pepperoni bread: