This New England Clam Chowder is made with fresh clams, smoky bacon, russet potatoes, and cream. A delicious soup to have for dinner with a crusty loaf of bread. 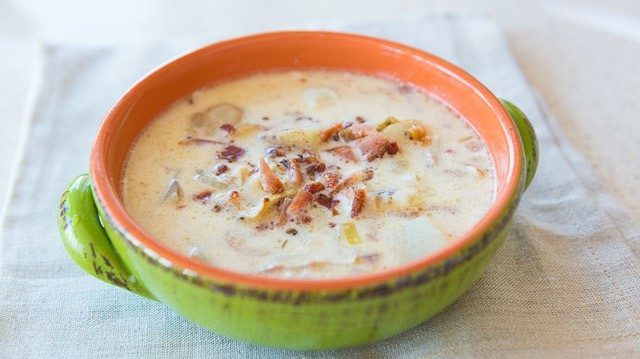 [Updated from the archives with new photos, writing, and a video. Originally posted May 2011]

New England Clam Chowder is my brother Andrew’s favorite soup in the whole world, so it’s something that was around a lot when we were growing up. It was canned clam chowder most of the time, but when we went out to the city, he’d go to his favorite spots to get Clam Chowder in bread bowls.

Have you seen the bread bowls before? It’s literally a big boule that’s hollowed out and filled with soup, and when you’re done with the soup, you eat the soup-soaked bread. I admit that it’s pretty glorious, if you have the calories for it 😉

Bread bowl clam chowder tends to be on the thicker side, probably so the bread doesn’t get too soggy, but my favorite New England style clam chowder isn’t flour-thickened at all. That’s how this version I’m sharing with you today is.

While the chowder is thin, what you lose in thickness you gain in flavor. Without the flour in the chowder, you can really taste the clams and seafood flavor SO much better. And since we’re splurging on the fresh clams, that’s what we want. Let’s get started! 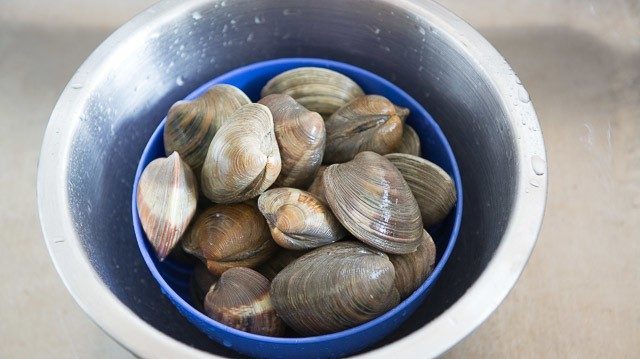 The reason I like using fresh clams is because I haven’t found a brand of canned clams that I like. If you think you’ve found one that rocks, I’d love to know about it in the comments section below, but for now, start with fresh littleneck clams.

After they’ve had a short soak in some water, cook the clams in white wine until they open: 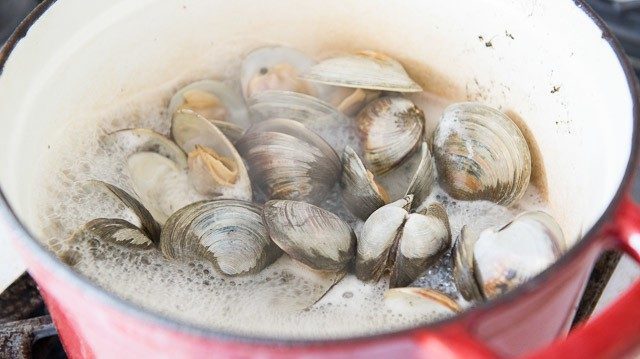 Since the clams I had were still a little dirty after the soak, I discarded the cooking liquid, but in an ideal scenario you keep the released juices and wine. This is a judgment call. If the liquid doesn’t look muddy or sandy, it’s worth keeping!

Remove the clam meat from the shells: 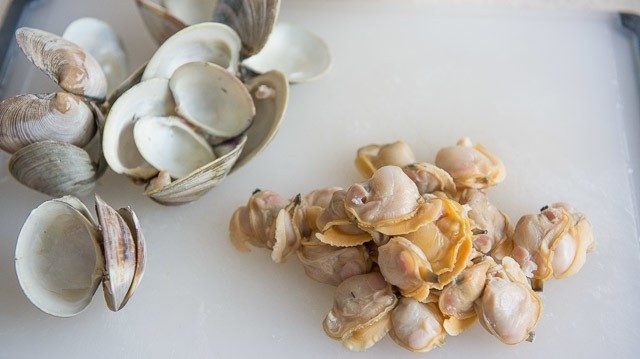 Then cook a few strips of bacon in the same pot: 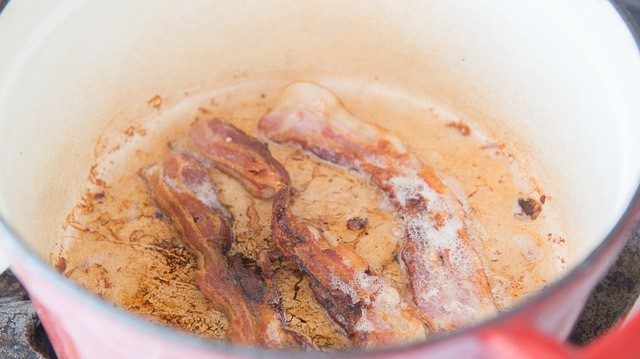 When the bacon is crispy, remove it and add chopped yellow onion to the bacon fat: 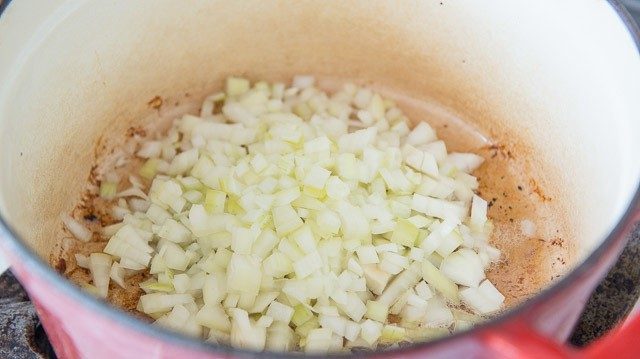 Cook until soft, then add two bottles of clam juice and a little water: 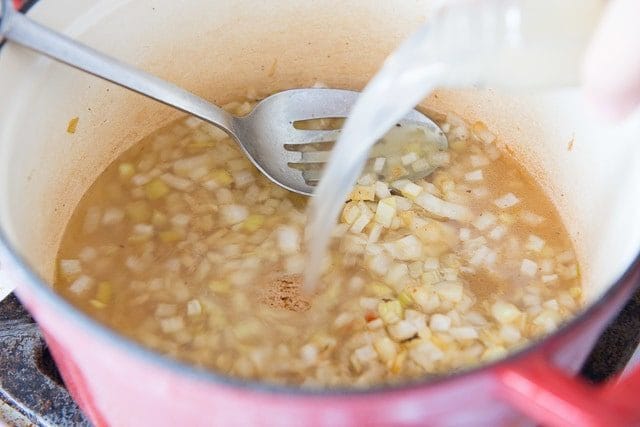 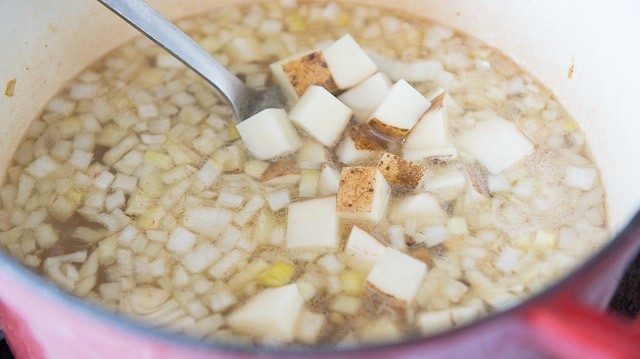 Simmer for 15 minutes until the potatoes soften, then stir in the clam meat and crumbled bacon: 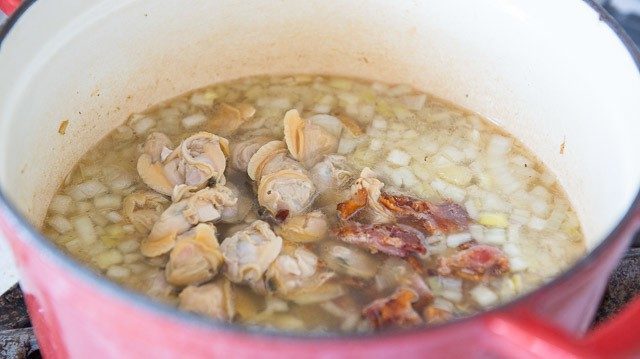 Add heavy cream and a little cayenne pepper, as the final touches: 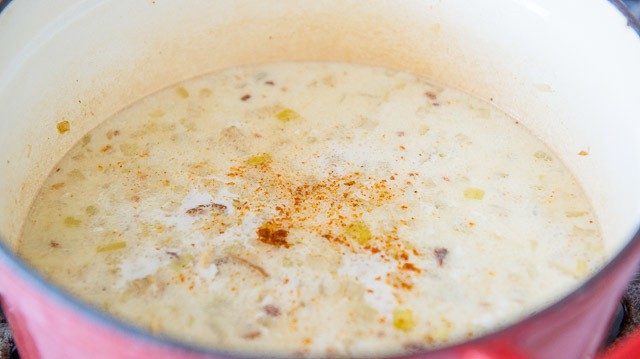 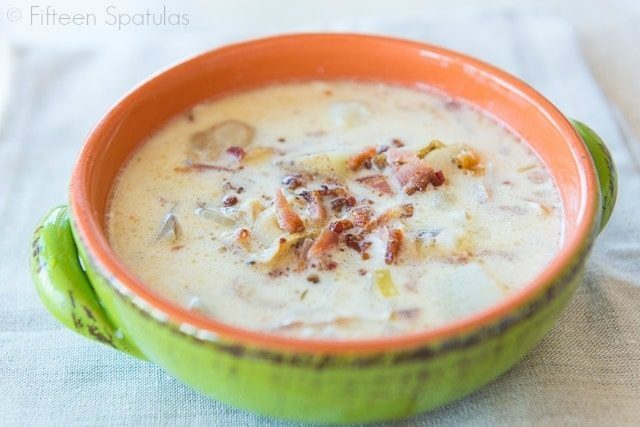 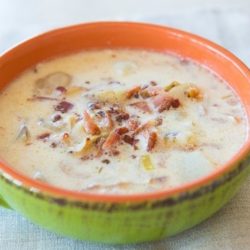