by Joanne Ozug December 15, 2019 (updated October 16, 2020)
9
This Shortcut Ratatouille is a quicker and easier take on the classic French country vegetable stew.
Creative preparation beyond steamed green beans or roasted broccoli has been a simple way to increase the number of vegetables in my day-to-day meals. 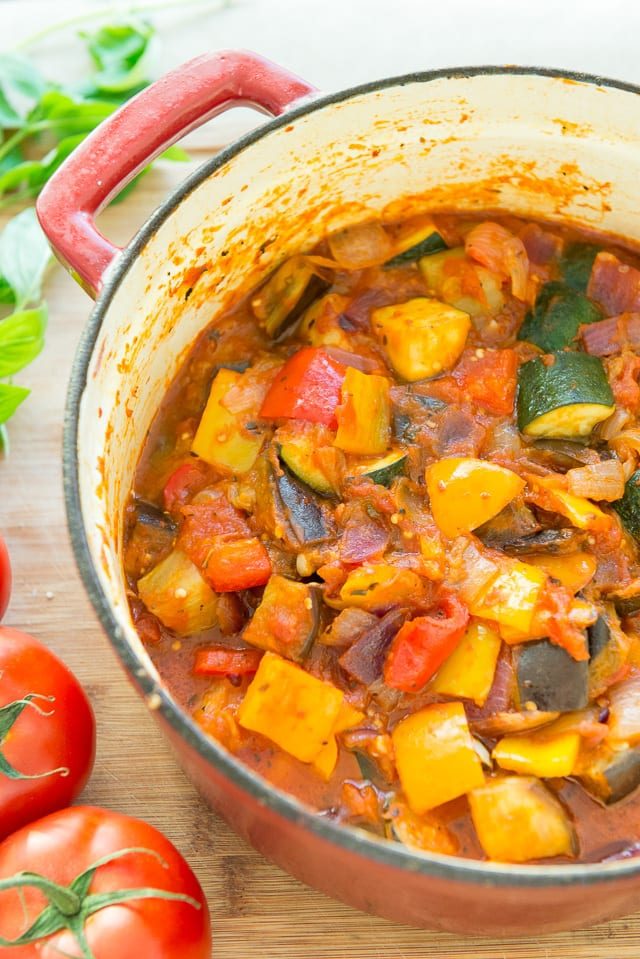 Over the years I’ve built up a collection of vegetable side dish recipes that are so good I never want to stop eating them, and ratatouille is one of those dishes.

There are a thousand and one ways to prepare ratatouille, but my favorite way is to make it on the stove in the true style of a stew (no baking). It’s easy to put together, and it’s one of those dishes where the leftovers only get better and better.

You can make it as a side dish for dinner one night, then have the leftovers with eggs in the morning, eat some with crusty bread for an afternoon snack, or serve it for dinner the following night tossed with pasta.

This dish can be served as a vegetarian entree, but it also works great as a side to Slow Cooker Short Ribs or something quick and easy like Chicken Milanese.

Each time I make it, I find new ways to eat it. 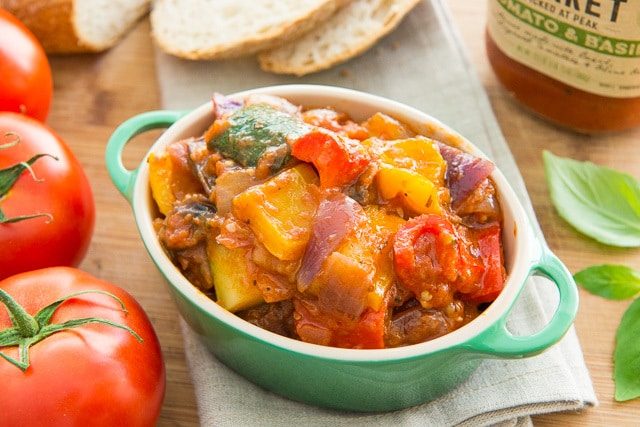 Ratatouille is a simple dish to make, though it can require a bit of time. Many of the recipes I’ve seen call for making a fresh tomato sauce by scoring, blanching, peeling, seeding, and chopping fresh tomatoes, then roasting them in the oven, and crushing them down into a sauce to stew the vegetables in.

This was always a bit more work than I was looking for to make a good ratatouille, and there are so many high-quality jarred tomato sauces that you can buy from the store, it’s a great way to shortcut this process while still ending up with a fantastic dish.

How to Make Shortcut Ratatouille:

To get started with the ratatouille, you’re going to cut up your vegetables.

I like to use three colors of bell peppers, zucchini, eggplant and two colors of onion. This gives the dish tons of color and makes it feel like a bounty and celebration of fresh veggies.

You’ll also notice I like bigger pieces of vegetables for my ratatouille so that in every bite, you get that cohesive stew flavor, but you can also pick out the flavors of each vegetable separately. Cutting bigger pieces also cuts down on the knife work.

Now it’s time to cook all the vegetables!

I think it’s best to cook the vegetables in batches, then recombine them later on. This gives you more control over the dish, and ensures that you don’t have super soft zucchini and crunchy bell peppers in the same bite.

I don’t find it’s much trouble to take the vegetables out to a bowl after you cook each batch, and that way the pan never gets overcrowded.

First, add a few tablespoons of olive oil to a dutch oven or pot, and cook the eggplant with a pinch of salt for about 10 minutes, until soft. 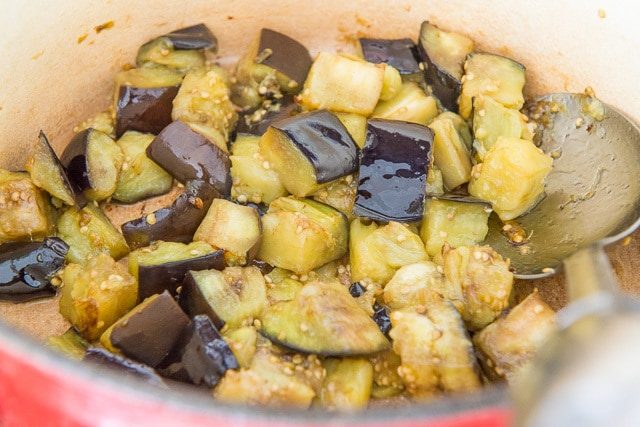 Remove the eggplant to a bowl, add a couple tablespoons of olive oil to the pot, and cook the onions with a pinch of salt for about 10 minutes, until soft. 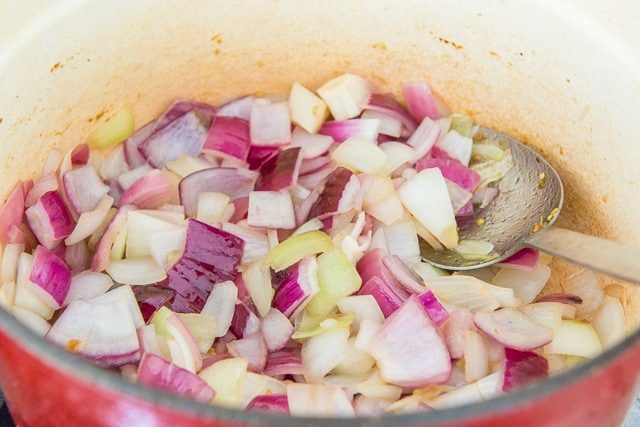 Now remove the onions to a bowl, and cook the peppers in a tablespoon of olive oil and a pinch of salt, for about 5 minutes, until slightly softened. 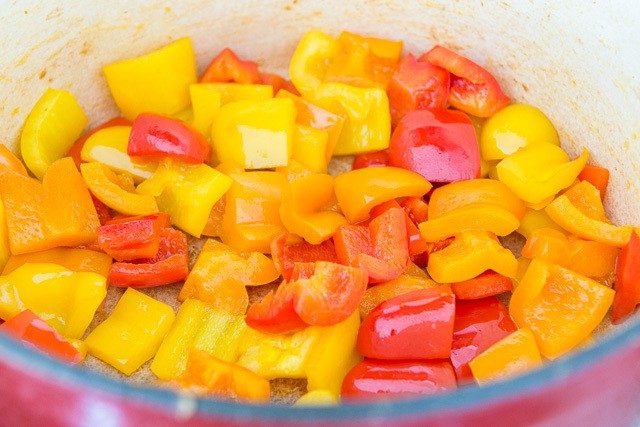 Take out the peppers, then cook the zucchini with a touch of olive oil and some salt, for about 5 minutes. 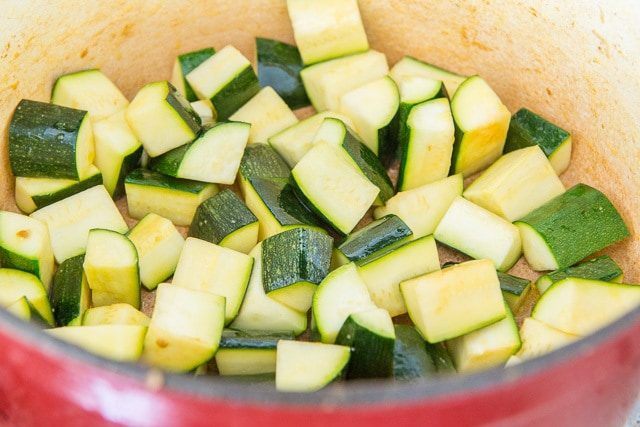 Once the zucchini have softened slightly, add all of the other cooked vegetables back to the pan. Look at all the colors! 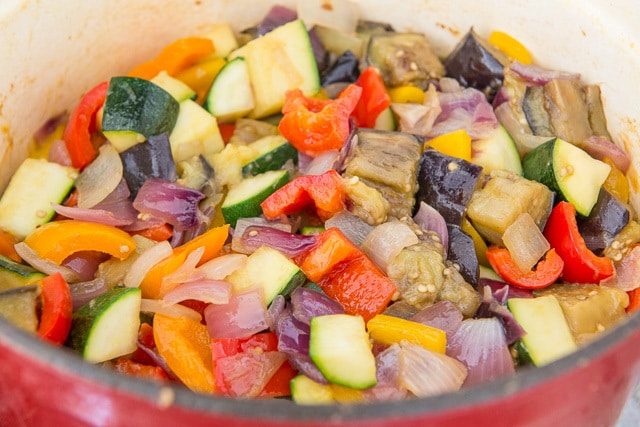 Next, add a couple tablespoons of minced garlic. 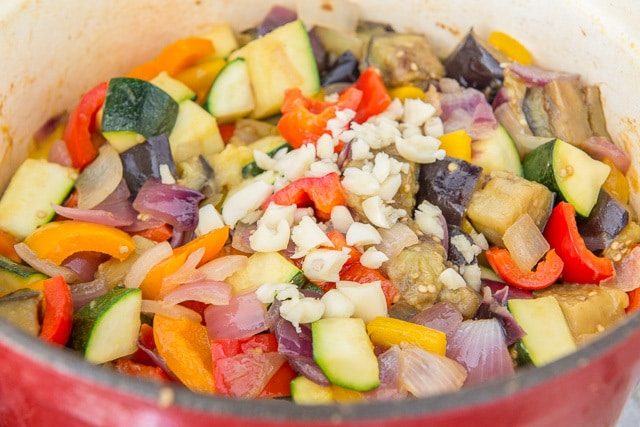 Stir that in, then add one jar of marinara or tomato basil sauce: 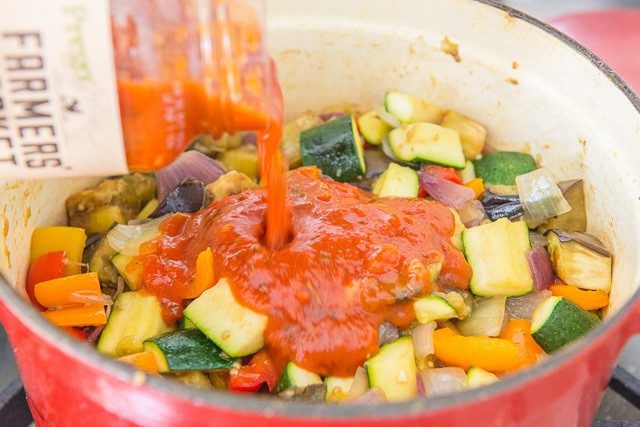 Give this a stir to coat the vegetables in the tomato sauce. 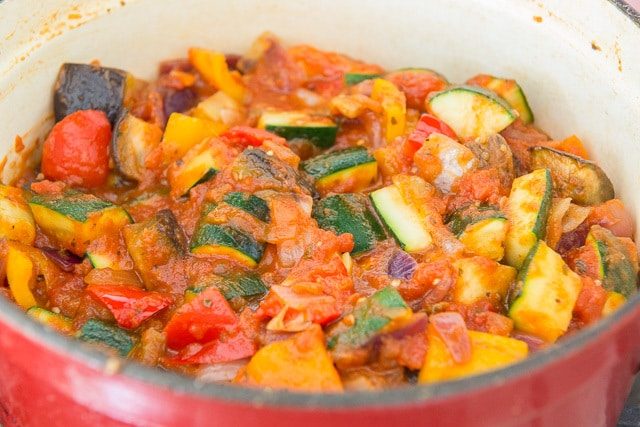 Bring the mixture to a simmer, and cook for at least 30 minutes, to further soften the vegetables and allow the flavors to meld together. 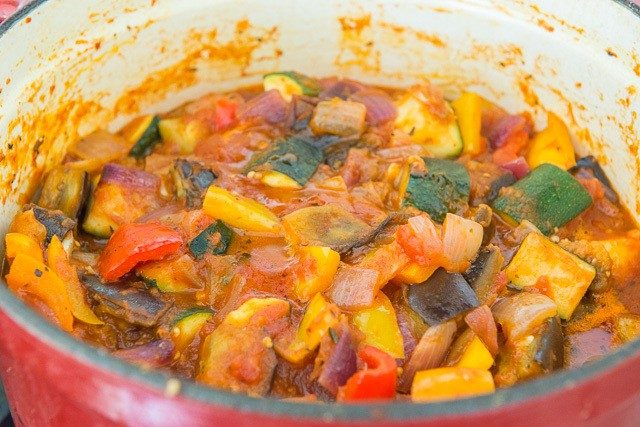 You can simmer the ratatouille for an hour if you want everything really soft, but I like the vegetables to retain some of their firmness. You can tweak the cooking time according to your preference.

The ratatouille can now be served, and leftovers can be kept for up to 5 days. 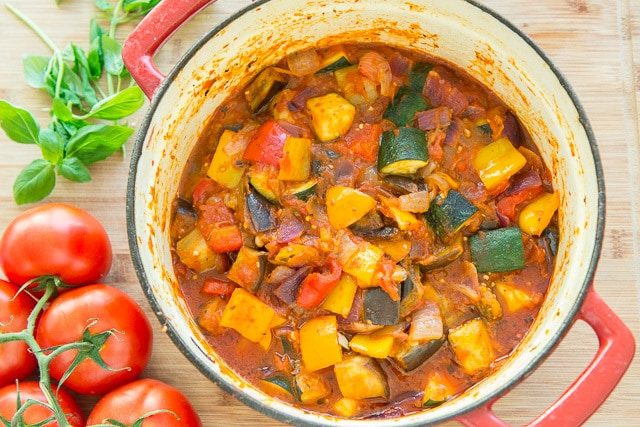 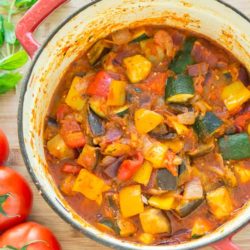 Leftovers will keep for up to 5 days.