This Jambalaya is flavor city, with smoked andouille sausage and shrimp, the Cajun holy trinity of onions, peppers, and celery, fire roasted tomatoes, and more.

It’s a hearty one-pot meal that makes for great leftovers!

Typical, but I fell in love with Jambalaya on a trip to New Orleans over a decade ago. 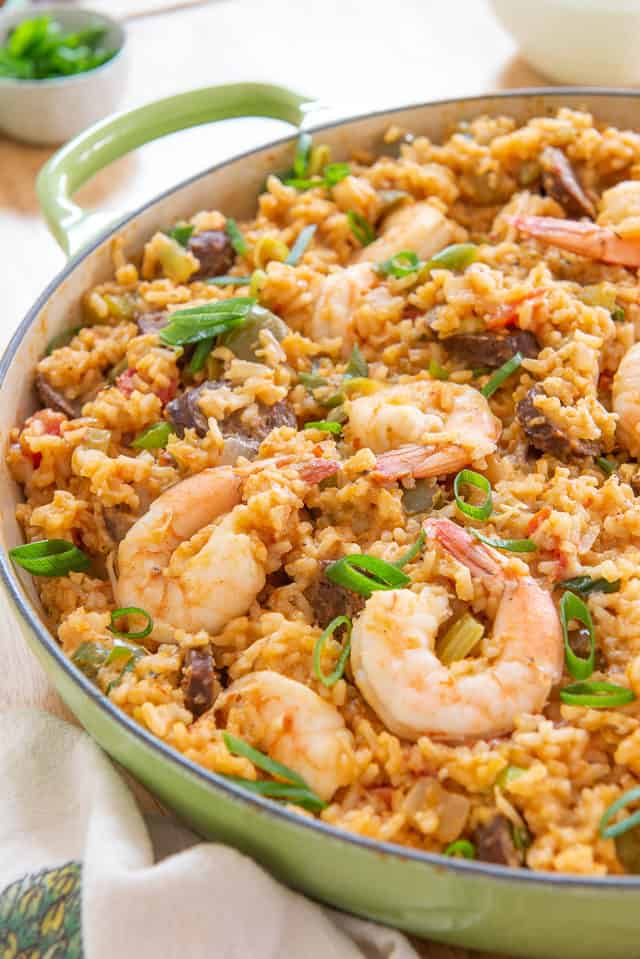 It’s one of those dishes where there are so many bold flavors going on that it’s impossible not to love, but making it is pretty simple.

Why this Jambalaya is Awesome: 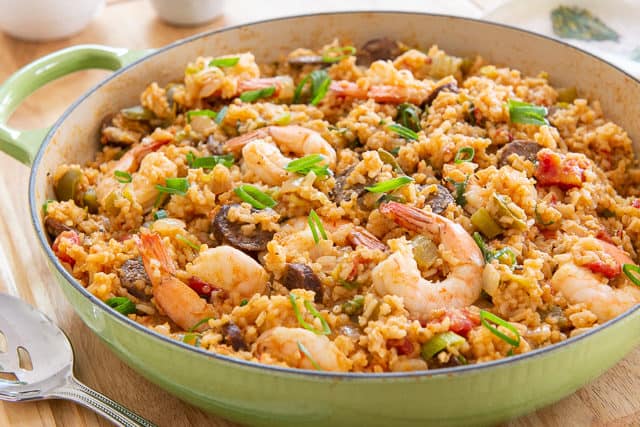 Just make sure you always retain the important elements for jambalaya, which are the andouille sausage (a must), the holy trinity vegetables, and either a true Cajun seasoning or a trio of spices that mostly capture those flavors.

This will give you the classic flavor you want.

How to Make Jambalaya:

In a large and wide pan (I used a 5-qt braiser – affiliate, but you can also use a large soup pot), soften the Cajun “holy trinity,” which is a combination of onion, bell pepper, and celery, with some oil, salt, and pepper: 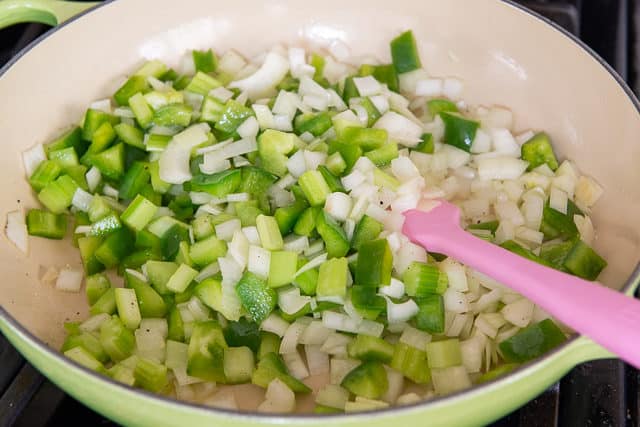 Cook for 7-8 minutes until slightly softened.

Keep cooking for another 5 minutes, until the sausage renders its fat and flavor, and continues to cook the vegetables even more.

Add minced garlic to the pan: 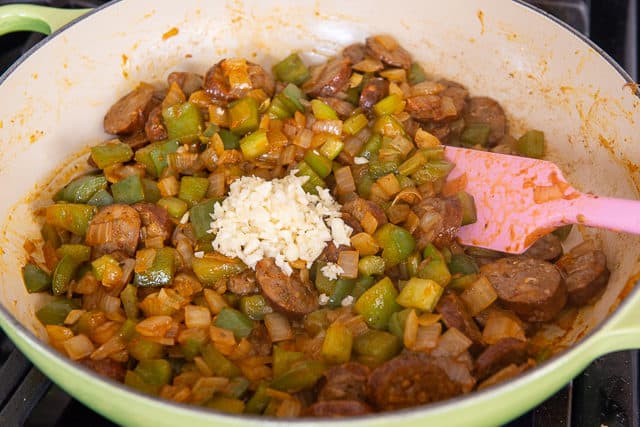 Stir that around for 30 seconds or so, then add rinsed long-grain white rice: 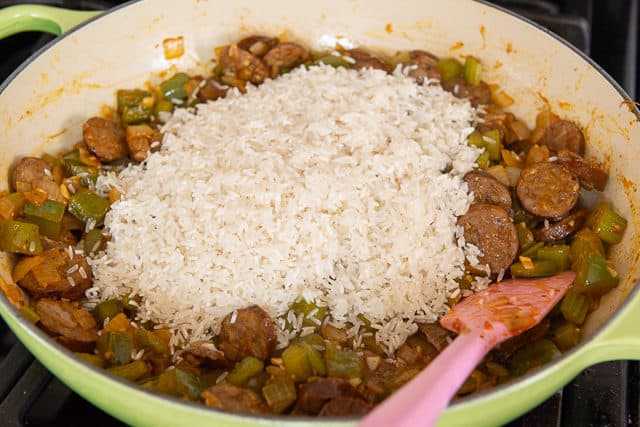 Rinsing gets rid of some of the starch and prevents the jambalaya from clumping up.

Stir that around for about 3 minutes, to toast the rice. 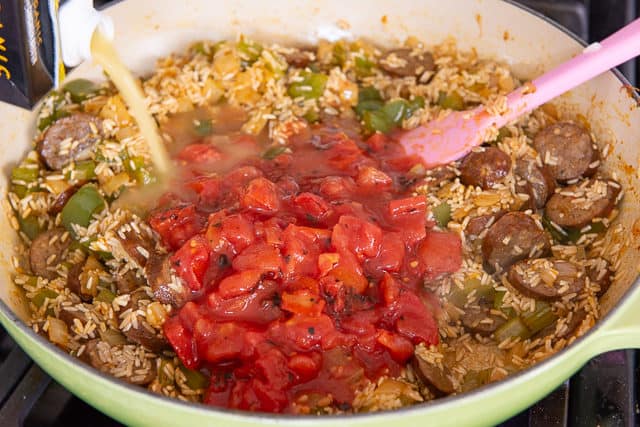 Throw a bay leaf on top, then the rice is ready to cook with the lid on. 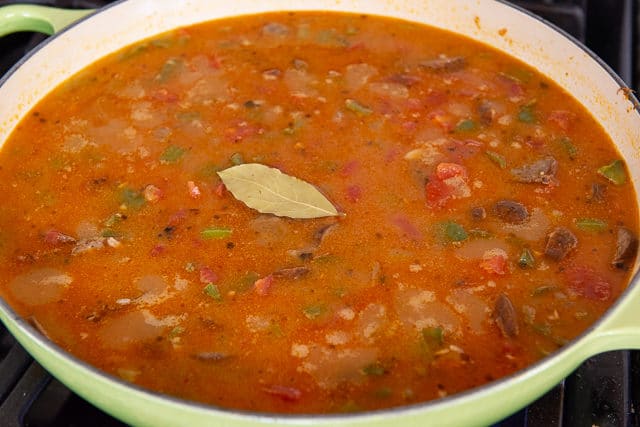 Simmer on low for about 15-20 minutes, until the liquid is almost all gone, and the rice is nearly tender.

Then add a pound of shrimp and sliced scallions: 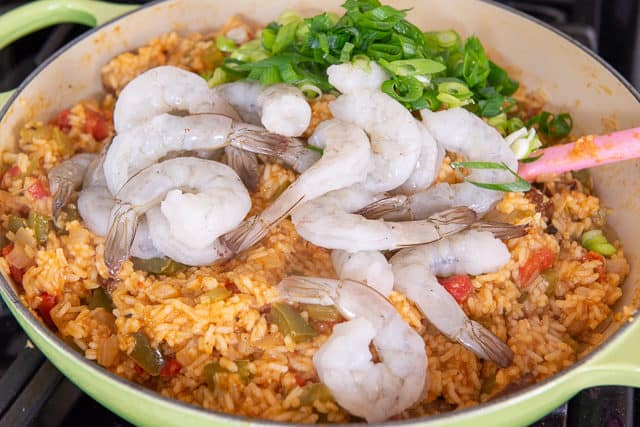 The Trick for Not Overcooking the Shrimp:

At this point I stir in the shrimp and scallions, put the lid on, and actually turn off the heat entirely, letting the residual heat cook the shrimp very gently: 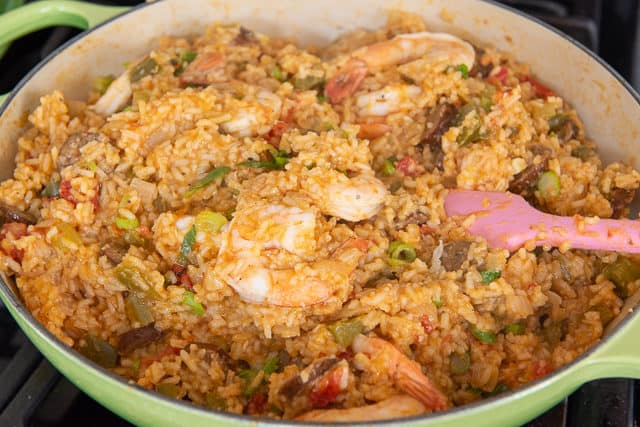 After 5 minutes, the shrimp should be perfectly cooked through and not rubbery, and the entire dish can be served right in the pan, with extra scallions on top: 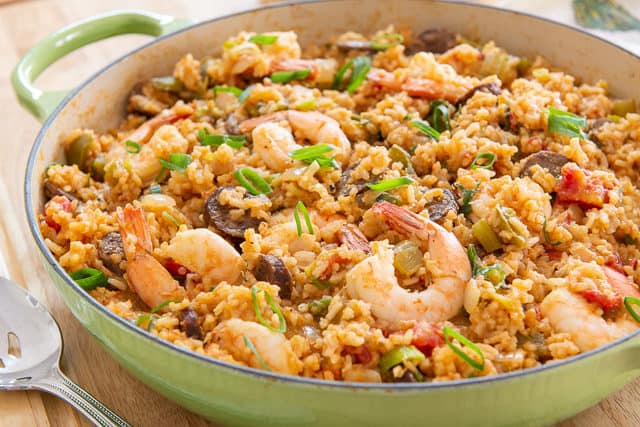 40 Clove Garlic Chicken, Ramen Noodle Stir Fry, and Fried Rice are some of my other favorite one-pan dinners. Enjoy!

How to Reheat Jambalaya: Be really careful not to overcook the shrimp, and either reheat in the microwave or on the stove, making sure to pull the food as soon as it’s warm. You may even want to take out the shrimp and reheat separately so the shrimp doesn’t get rubbery.

Can Jambalaya be frozen? Yes, in an airtight container for up to 2 months.

Can Jambalaya be made ahead? Yes, and leftovers will keep for 3-4 days. 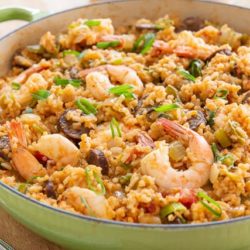 *Sometimes I end up with a little more vegetables depending on the sizes I get from the store. I've made this with up to 3 cups of yellow onion, 1.5 cups of bell pepper, and 1 cup of celery. Try to keep to those ratios the best you can. **This is fairly spicy with 1/2 tsp cayenne. For less spice, cut the amount in half. ***Since a carton of chicken stock is usually 4 cups, I usually add another cup of water rinsing out the carton and the tomato can, so as not to open another box. However, you can use 5 cups of chicken stock if you want to maximize flavor. ****I typically use 16/20 size shrimp. If you use smaller shrimp, it will take less time to cook. Be careful not to overcook the shrimp! When in doubt, cut into one.