This is the dessert I always make for guests when I’m entertaining them for the first time. When people taste it, they think I’m a food magician.

This is the creamiest, most luscious ice cream you’ll ever taste, and no ice cream machine is needed. 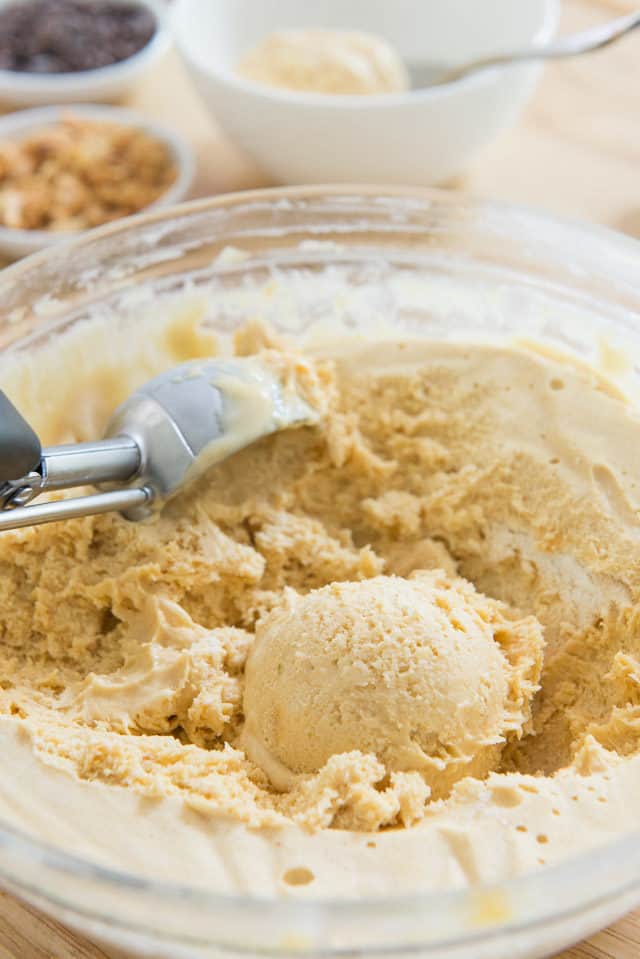 That’s when I first published this recipe.

It is *truly* one of the oldest recipes on my site, and one of the most spectacular.

When you start making this recipe, you will discover “semifreddo face.”

Semifreddo face = a face awash in complete wonder and shock that such an insanely delicious, creamy, luscious concoction exists on this very earth. 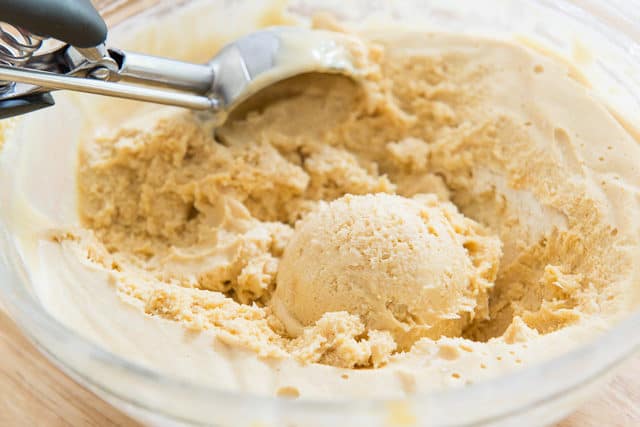 If this recipe is so spectacular, why haven’t I updated it sooner?

I have tried repeatedly throughout the years to update this post with better photos. But it’s SO hard to photograph because it’s incredibly soft and melts very quickly.

But that’s also the reason why it’s so delicious and incredible.

This “ice cream” is made without an ice cream machine, and instead relies on whipped (and cooked) egg yolks to give it an incredibly creamy, rich, fluffy, and almost sticky texture.

It is one of the richest and most luscious foods you will ever taste.

A small scoop is all you need to be satisfied!

How to Make Semifreddo:

To get started, combine eight egg yolks and granulated sugar in a heatproof glass bowl: 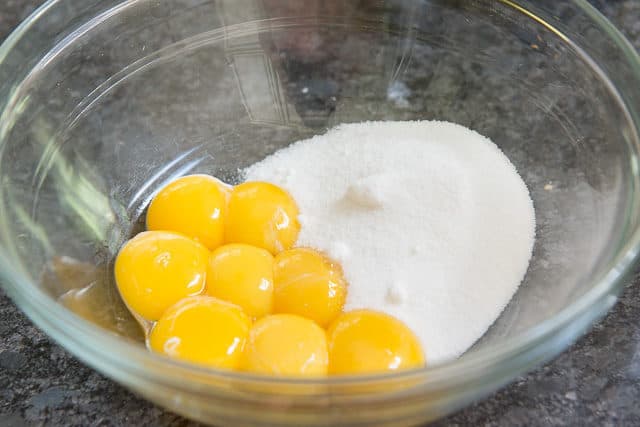 Place the glass bowl into a small pot filled with an inch of simmering water, to create a double boiler.

Make sure the bowl is not touching any simmering water, but solely being heated by the steam. 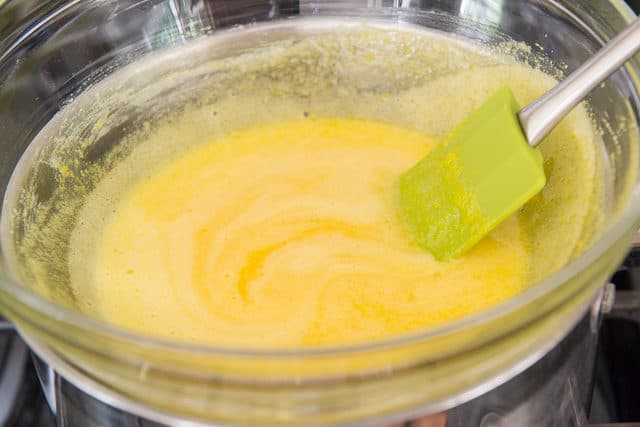 Stirring frequently with a spatula, cook the egg mixture to 160F, which should take about 5-7 minutes, depending on your stove and how high the heat is.

Take care to make sure the water is not boiling, but only simmering, because if you overcook this mixture, you’ll get little bits of egg.

Because of this, always strain the custard to get out any pieces of egg. If you’re lucky you’ll get none, but it’s totally fine if you accidentally overcook a little bit.

This particular time I made it, I had a few pieces of solidified egg on the strainer, which you can see here. 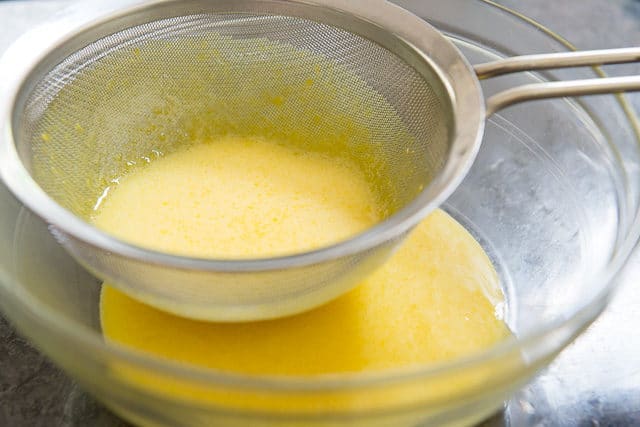 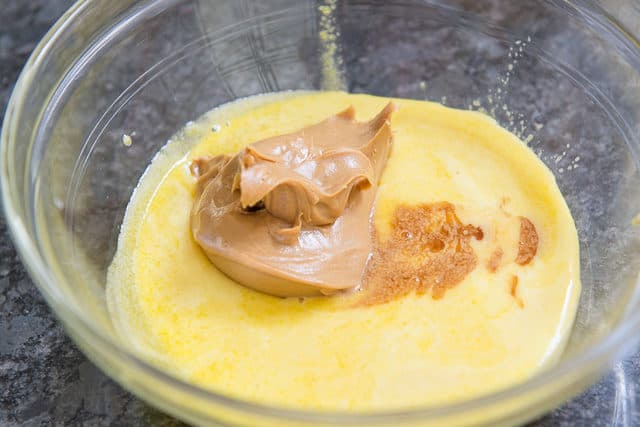 Note that if you don’t want to add peanut butter, you can certainly leave it out and use this recipe as a general base for other flavors.

However, I’ve tried many flavors at home and peanut butter is my favorite. I love the richness and flavor it adds. (And if you love peanut butter too, you need to try my Peanut Butter Cookies once you’ve made your way through this semifreddo).

Use a hand mixer to whip this all together until smooth. It will be very thick: 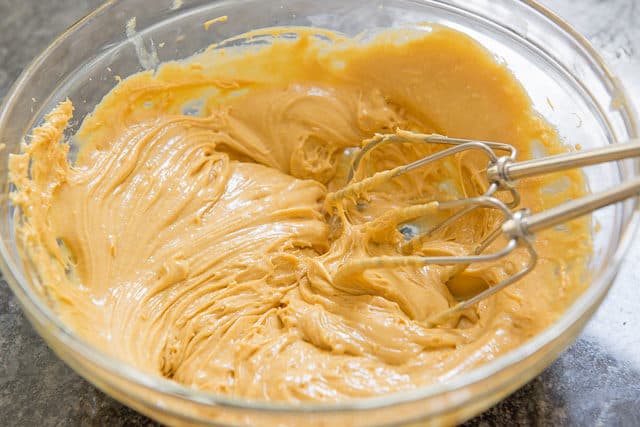 Whip together some lightly sweetened whipped cream, and add to the peanut butter mixture in batches.

First add 1/3 of the whipped cream to the bowl: 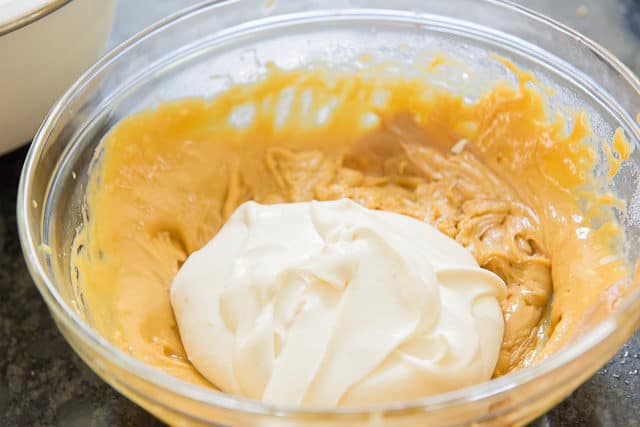 You’ll need to use the hand mixer to mix it in, and the mixture will lighten up considerably: 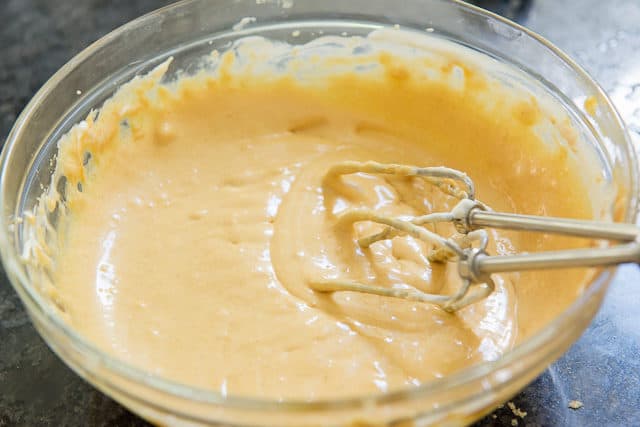 Now you will be able to fold in the remaining two thirds of whipped cream with a spatula by hand: 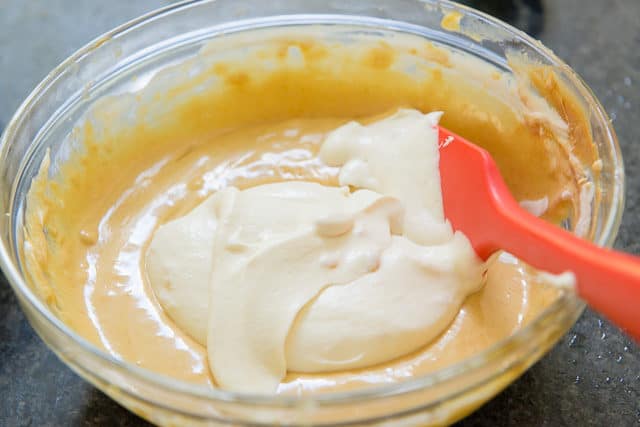 Folding in by hand preserves as many air bubbles as possible so we don’t deflate the mixture. 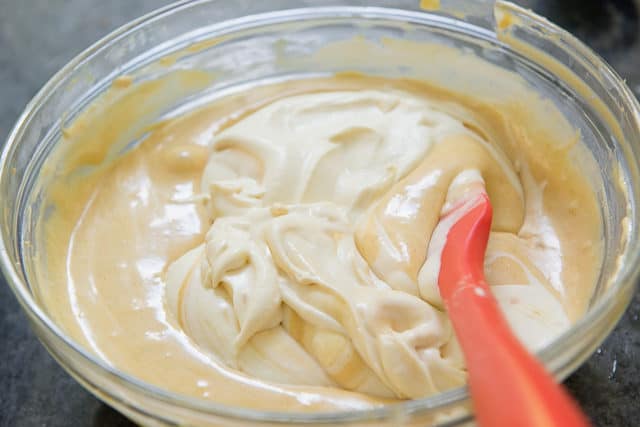 When the cream is all folded in, it will look smooth and light in color.

Now we need to get this into the freezer.

I prefer to press plastic wrap directly into the semifreddo and mixing bowl and put this in the freezer, to avoid dirtying another container and to avoid any transfer of the custard. Then I use an ice cream scoop to portion out semifreddo into bowls when I serve it.

However, it is traditional to transfer the semifreddo to a loaf pan and freeze it into a “loaf” that you later slice and serve. It’s up to you! 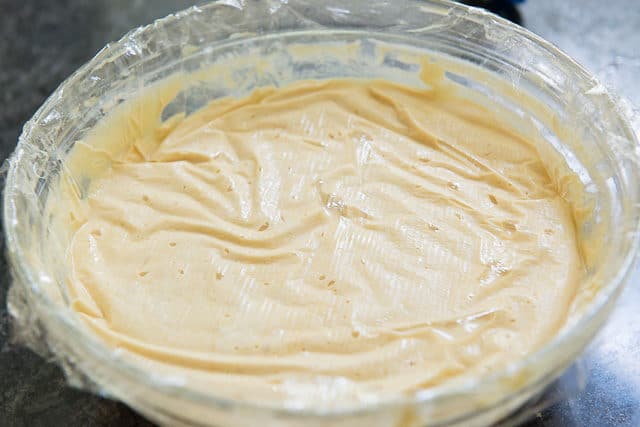 Freeze the semifreddo for at least four hours, or until fully frozen. 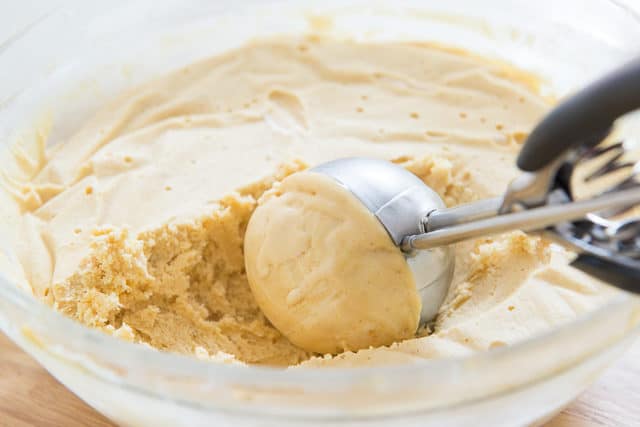 The texture of the semifreddo will be very soft, and it will also melt very quickly, so have all your bowls and spoons ready to go when you want to enjoy it.

My favorite way to enjoy this is by its own since it’s so rich and flavorful, but you can also add some Hot Fudge Sauce to bring in the chocolate! For a more traditional ice cream experience, try my Pumpkin Chip Gingersnap Cookie Ice Cream or Biscoff Chocolate Chunk Ice Cream. 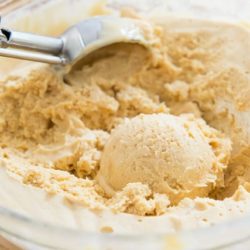 *Don't use a natural peanut butter here, or the texture won't be as smooth. There's a Skippy creamy peanut butter that doesn't have any hydrogenated oils in it, but has a little bit of extra oil and sugar to get things as smooth as the classic peanut butter. That's what I use.