Spanish Tortilla is a big potato and egg omelette that’s served in slices. It’s traditionally served as bar food in Spain, but I love making it for a simple and delicious brunch!

If you need to switch things up a little bit from your usual Omelette, give this Spanish version a try. 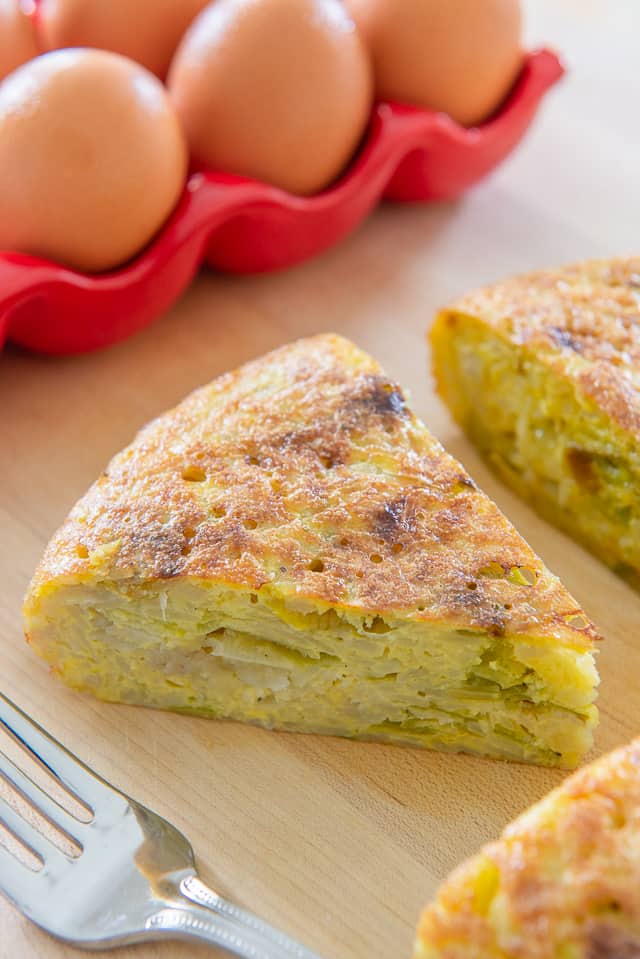 I ate Spanish Tortilla a few times a week during my five months living abroad in Spain. It’s often served as a tapa, meaning if you go out and order a drink, they bring you this “Tortilla Espanola” as a snack.

I happen to love it for breakfast, as being mostly egg and potato, it feels very “morning food” to me.

It’s traditional to use yellow onion, which I do use sometimes, but I like adding leeks even more.

Potatoes + leeks is one of those holy grail combinations (hello potato leek soup) that works really well here too.

Typically there’s no cheese in this recipe, but there have been times when I’ve added Spanish manchego sheep’s milk cheese and the flavor is wonderful. 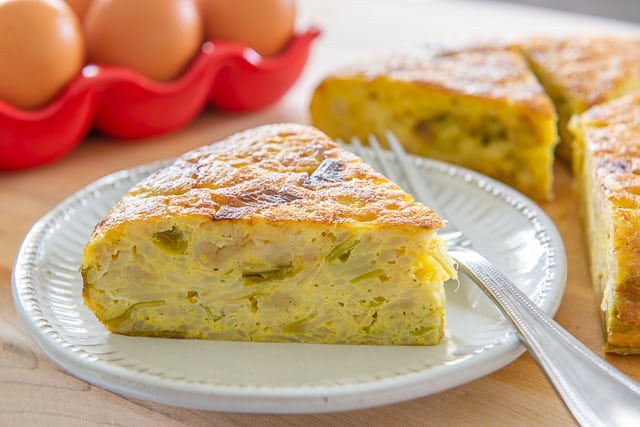 In other words, feel free to play with the ingredients a bit. I’ve used parmigiano reggiano cheese in a pinch and it’s great too (but that does take it in the Italian direction). Use what you like!

How to Make Spanish Tortilla:

To get started, cook the onion. I use only the white and light green parts of the leek, since the dark green parts are too fibrous. 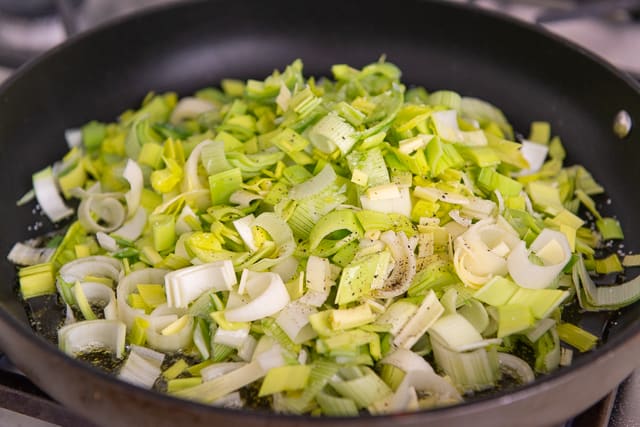 Saute the leeks in extra virgin olive oil for about 10 minutes, until softened:

I use extra virgin olive oil for the entire recipe instead of refined olive oil. The temperatures don’t get too high while cooking this, and the extra virgin has the best flavor and nutrition.

To prepare the potatoes, peel and shred 2 pounds of russet potatoes and soak in cold water for 2 minutes: 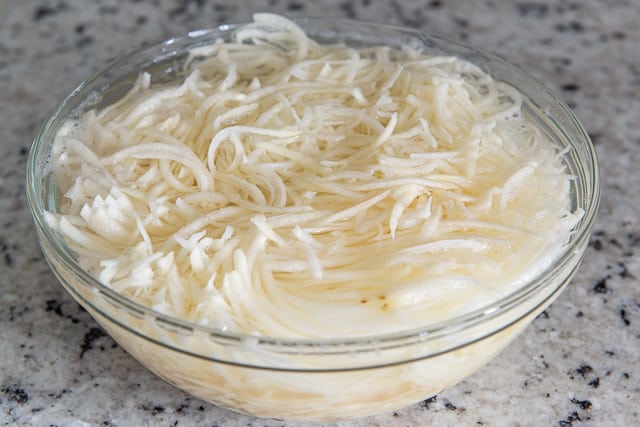 It’s important to soak and rinse the potatoes, otherwise they’ll give the spanish tortilla a gummy texture.

Rinse the potatoes really well, and squeeze dry with your hands.

Remove the leeks to a large mixing bowl. Then return the skillet to the heat and add more olive oil, the grated potatoes, salt, and pepper: 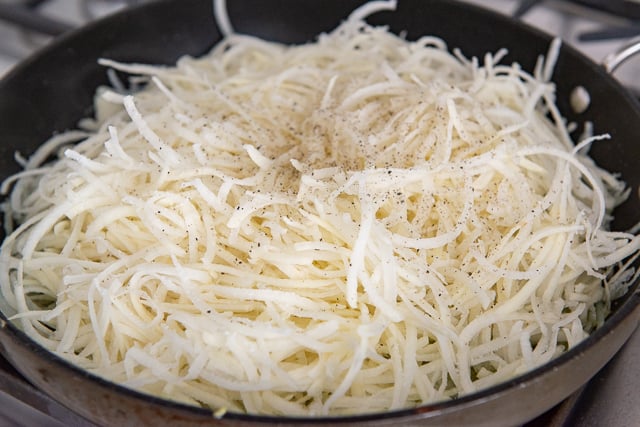 Cook for about 10 minutes, until the potatoes are tender but not quite browned. 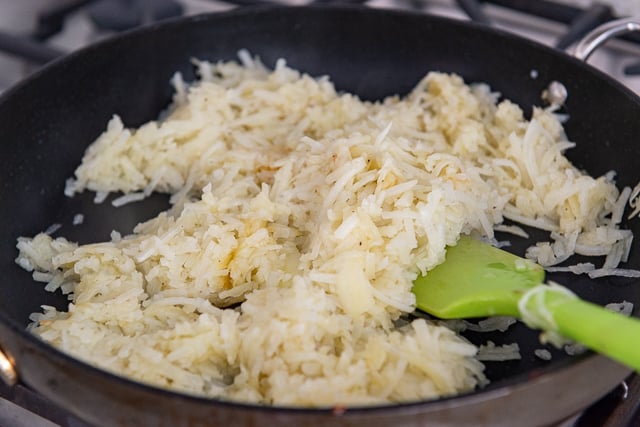 Add the cooked potatoes to the leeks, and toss to combine. Then, add 6 whisked eggs: 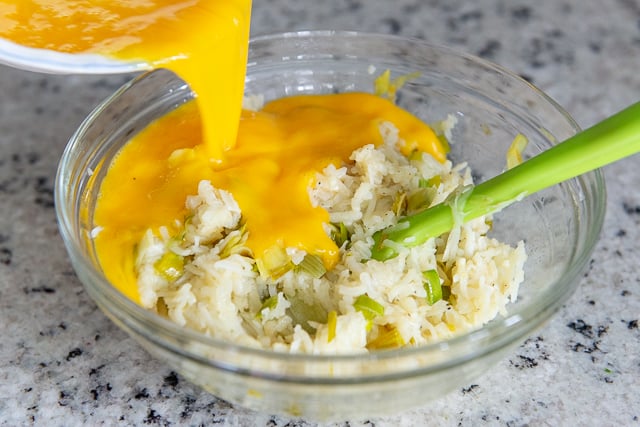 Stir to combine, then it’s time to cook.

Heat olive oil in an 8″ nonstick skillet, then add the batter to the pan, smoothing out the top with a spatula: 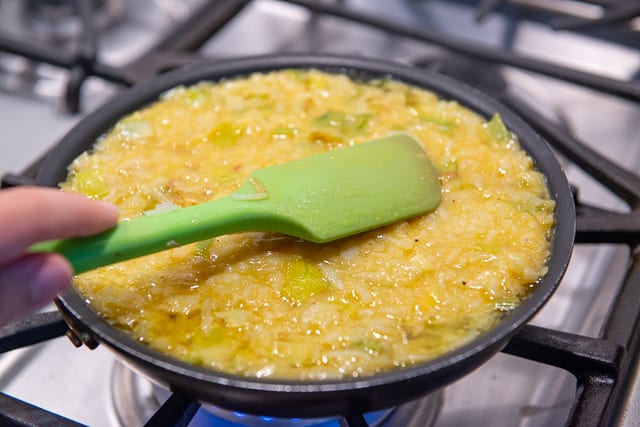 Note: it is really important to use an 8″ nonstick skillet here (affiliate link). It will seem small to the eye, but the ingredients will fit, and this is how you get that dome shape that you can cut into slices later on. Anything larger will be hard to manage.

And, like anything involving eggs, the nonstick part is incredibly important too.

Cook the tortilla española for about 5 minutes, until you see the sides start to set: 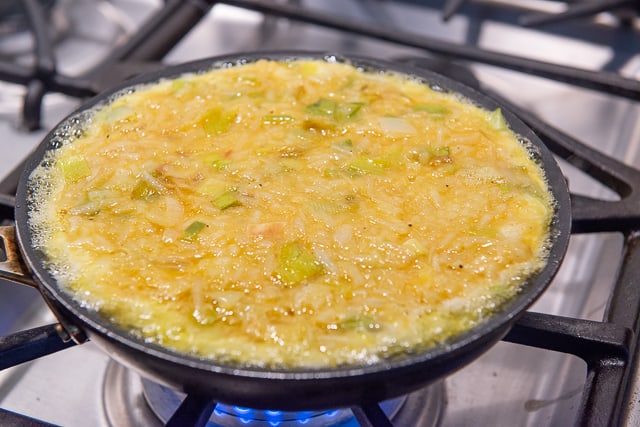 Wearing oven mitts (I like these silicone mitts to really protect the hands), put a plate on top of the skillet, and flip it over so the tortilla rests on top. It should be nicely browned: 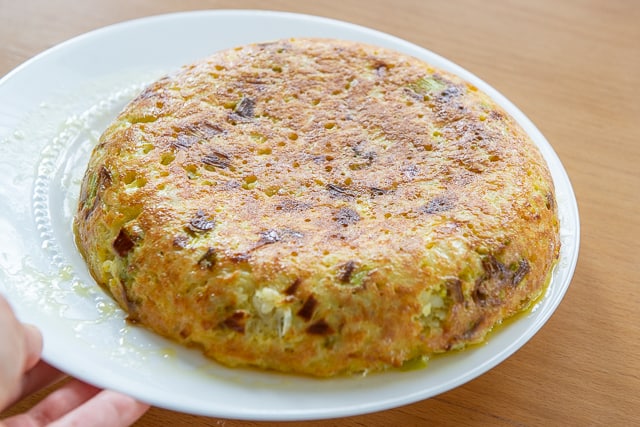 Then, slide the tortilla back into the same skillet, so you can finish cooking the bottom through: 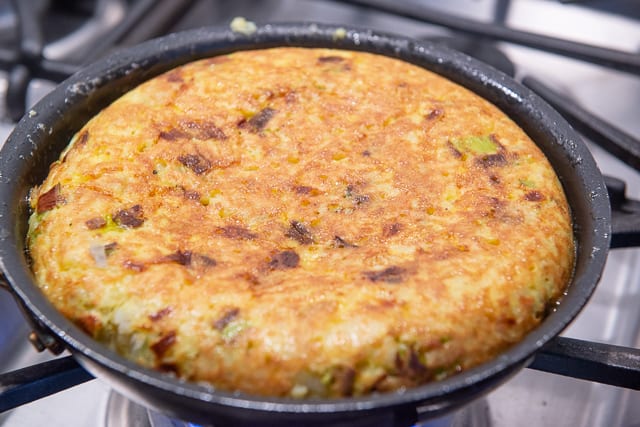 After another 3-5 minutes, the spanish tortilla should be fully cooked and set, with a nice rounded shape: 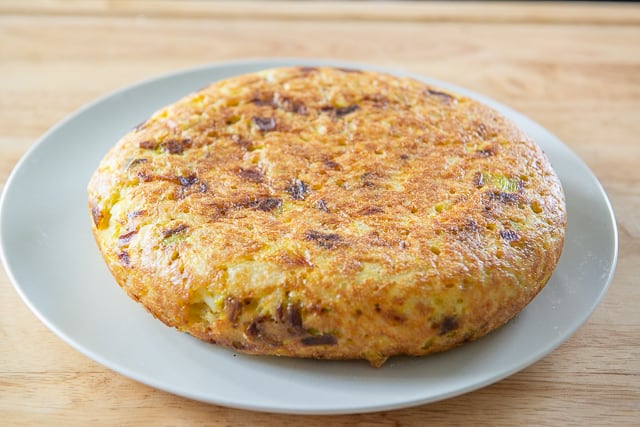 I like to let the tortilla cool slightly, then you can slice and serve at room temperature. It is very common to serve it cold as well, but I prefer it warmed up and reheat leftovers in the microwave. Enjoy! 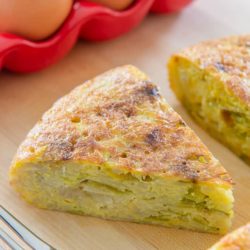 Feel free to add up to 1 cup of grated Manchego cheese to the batter if you'd like, if you tolerate dairy. Stir it in with the eggs, potatoes, and leeks before cooking. *Do not use more than 2 pounds of potatoes, or you'll have too much filling for the 8" skillet. If you're under a little bit, it's fine, but make sure to weigh them at the store if you don't have a scale since size varies so much. **It's really important to use exactly an 8"skillet that's nonstick. See post for more details.