Parsnips are cut into matchsticks, tossed with garlic and thyme, and roasted until golden and caramelized on the edges, for a healthy and delicious snack! 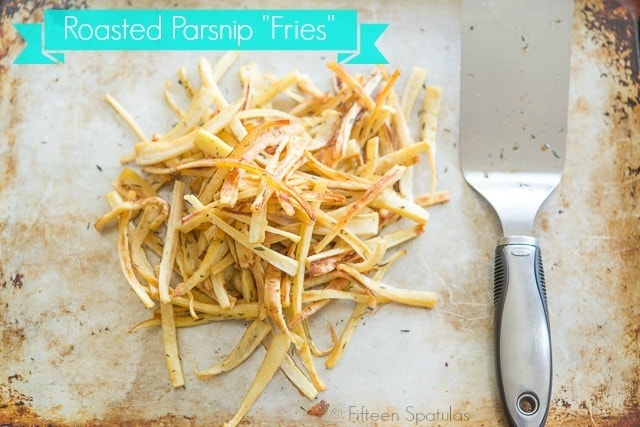 Parsnips are getting quite a bit of attention lately, and I have to say I’m thrilled about it. YAY parsnips!

I’ve been enamored with parsnips for a few years now, ever since I made a big pan of roasted root vegetables for Thanksgiving one year. Amongst the carrots and sweet potatoes, I felt compelled to pick out all the parsnips and eat those first. They’re SO good.

If you’ve ever come across parsnips at the grocery store or farmer’s market, you may have noticed they look sort of like white carrots. Comparing a parsnip’s neutral color to the radiant bright orange color of carrots, it doesn’t look like much, but I think parsnips have WAY more flavor than carrots. Roasted parsnips have a sweet, caramelized flavor with a hint of spice. It’s a very “warm” flavor. 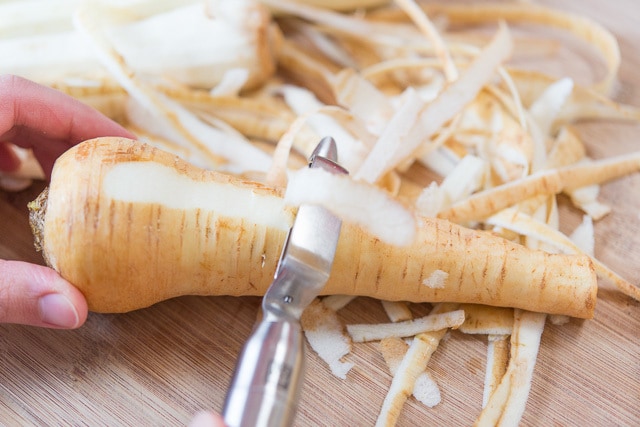 Preparing parsnips can be as simple as peeling them, cutting them into chunks, and roasting until tender, but sometimes I like to make them into parsnip “fries.”

You can use a mandolin to cut them into matchsticks, or you can cut them up by hand.

Start by cutting the parsnips into approximately 4 inch sections: 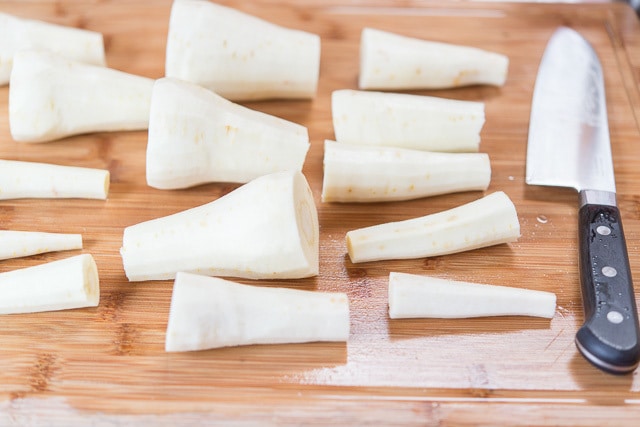 Cut those into long pieces: 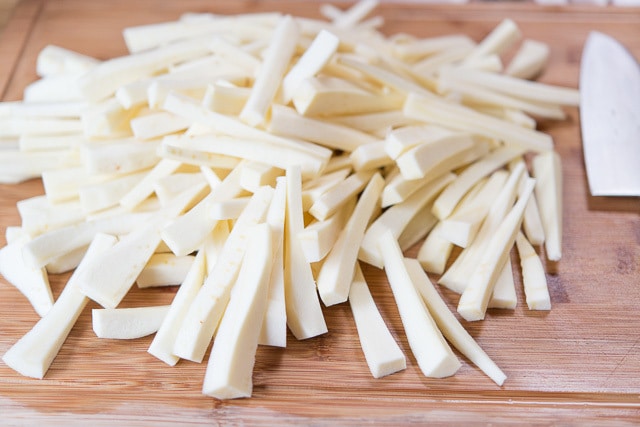 Put the parsnips in a bowl, and add some olive oil: 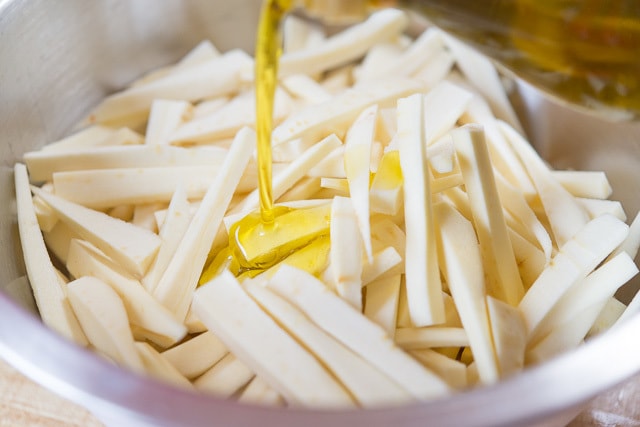 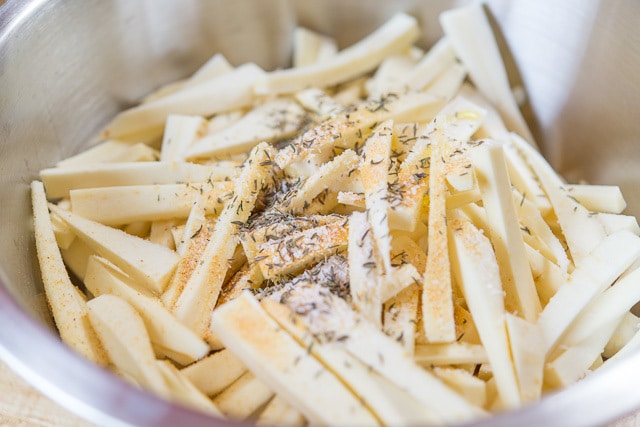 Mix it all together until the parsnips are well coated with the oil and seasoning: 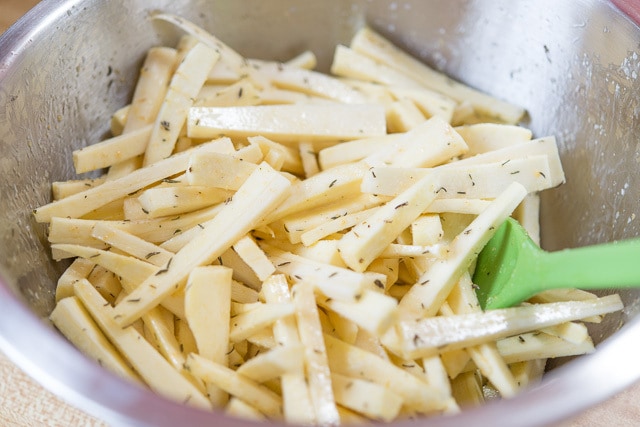 Then spread them out onto a sheet pan.

If you are cutting up two pounds of parsnips, and try to get them onto one sheet pan, it will look like this: 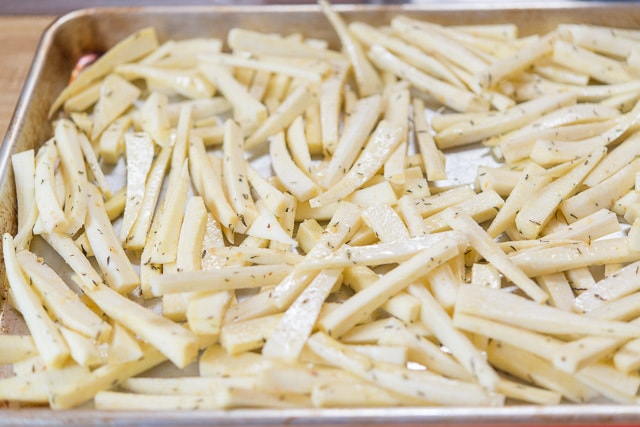 They won’t brown at all like that because they’re on top of each other, so I usually divide it between two sheet pans so the parsnips have more room: 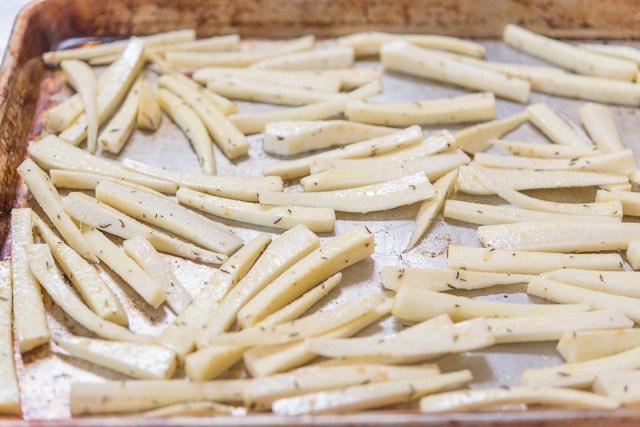 Roast the parsnips for a good 35-40 minutes until they’re tender and a little brown on the outside: 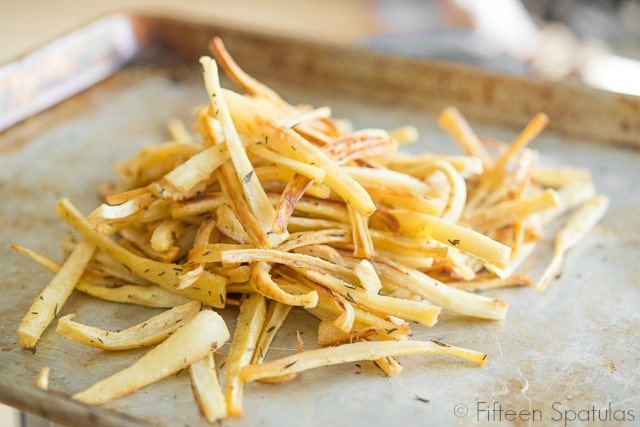 Enjoy! And by the way, I do this with sweet potatoes too! 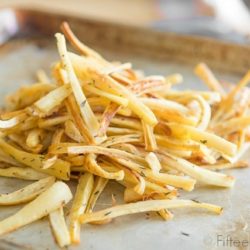 Servings: 3
Prep Time: 15 mins
Cook Time: 35 mins
Total Time: 50 mins
Parsnips are cut into matchsticks, tossed with garlic and thyme, and roasted until golden and caramelized on the edges, for a healthy and delicious snack!
Print Recipe Pin Recipe
1
reviews
Leave a Review »