This French Onion Soup is made from scratch, cooked low and slow, giving the end result an incredible depth of flavor and aroma.

There is something so nostalgic about this classic soup. Just thinking about that first bite with gooey cheese, crunchy baguette, and the rich beef onion broth…it makes me swoon. 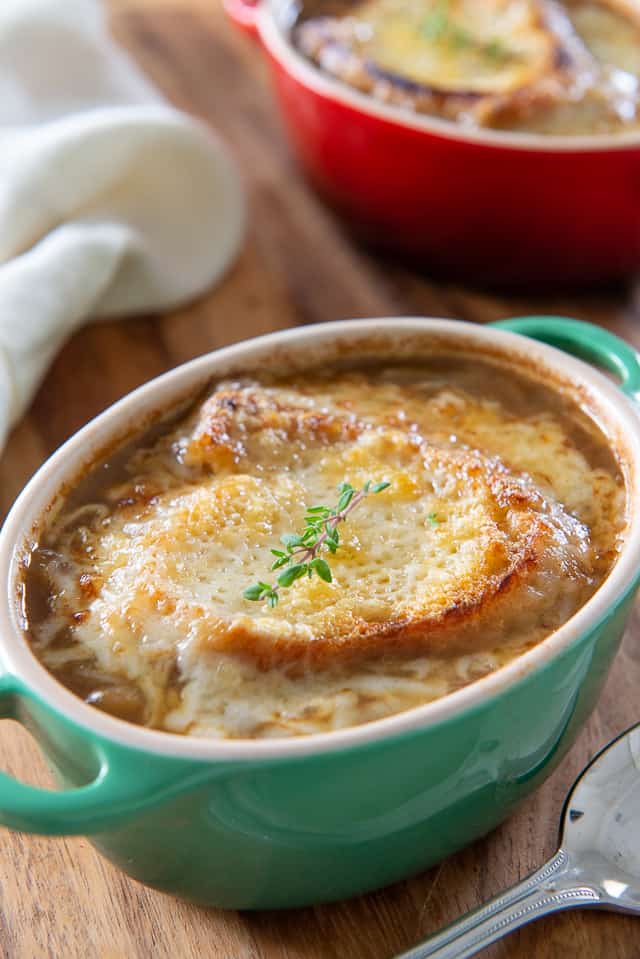 This combination of flavors and textures is what makes French Onion Soup so epic. And even though it’s a popular soup to get out at restaurants, it’s really easy to make yourself.

The only obstacle to this dish is the mountain of onions you must slice, which is only really a problem if you’re one of those lucky people who cries when cutting onions. I’m one of those people.

If you wear contacts, I’ve discovered that wearing contacts (instead of glasses) helps reduce the tears significantly.

I’ve also tried wearing swimming goggles, though they fog up pretty quickly, so the cutting window is quite short. I haven’t tried the dedicated onion goggles (affiliate), but it seems those are hit-or-miss for whether or not they’ll fit your face.

Even with a little crying, French Onion Soup is delicious enough that it’s totally worth it. 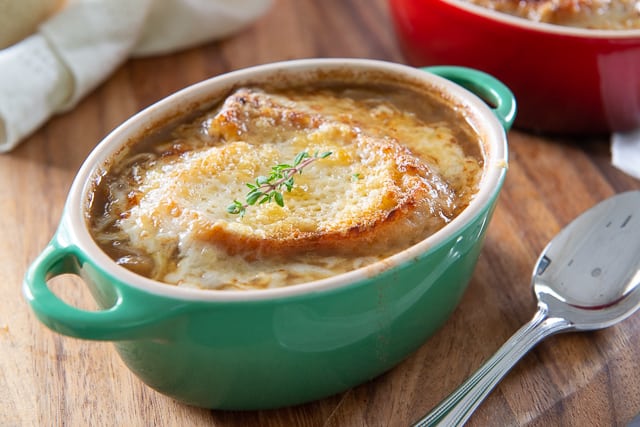 While this soup is easy to make, it needs time and can’t be rushed. The onions take about an hour and a half to get to their brown, caramelized state. After that, the beef broth, wine, herbs, and onions need at least 30 minutes to simmer together.

The good news is the soup smells so good that I’m happy to have it cooking in my kitchen for a couple hours. Heaven!

How to Make French Onion Soup:

Slice 4 lbs of yellow onions, place them into a large soup pot, and season with salt. Also add 4 tablespoons of butter to the pot (I nestled it down to the bottom of the pot after taking the picture): 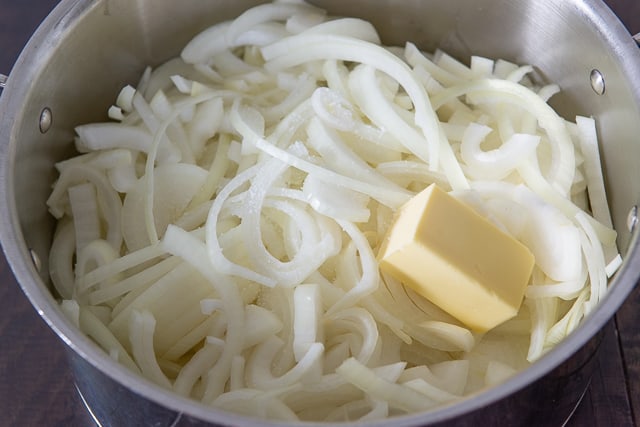 Personally I use yellow onions for my french onion soup, though red onions are also a good option. To clarify, I’m using regular yellow onions, NOT sweet onions. Using sweet onions like Vidalia will make your French Onion Soup too sweet in the end.

Cover the pot and let the onions sweat over medium heat for about 20 minutes. They will now look a bit translucent and reduced in volume: 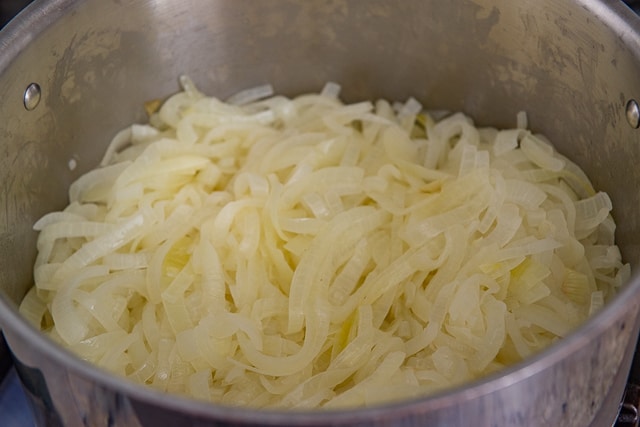 Leaving the pot uncovered, continue to cook the onions for an hour, until they have darkened in color and reduced down even further: 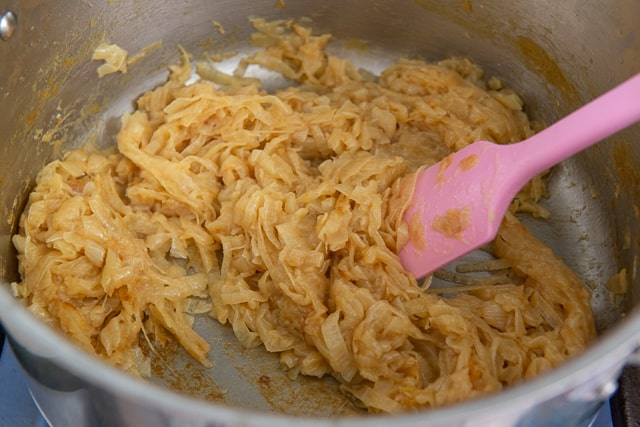 Add Sherry to the pot: 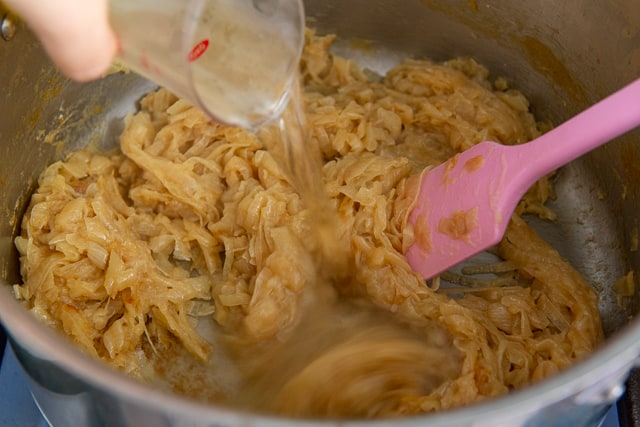 Then cook the onions for a few minutes, until the wine has cooked off: 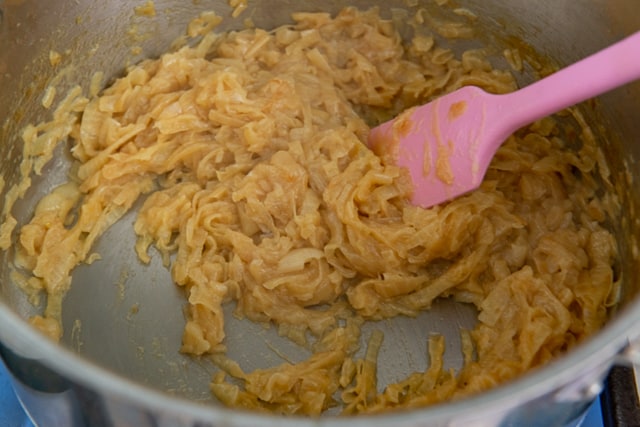 Add beef broth, a bundle of fresh thyme, and a bay leaf: 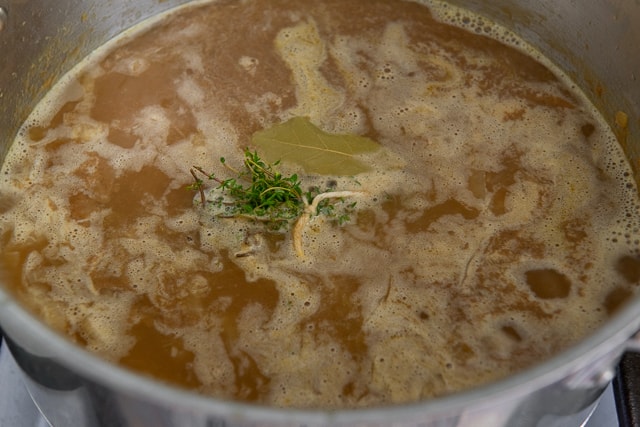 Simmer the soup for at least 30 minutes, to deepen the flavor. I sometimes go an hour if I have time.

When you’re ready to serve, ladle the soup into heatproof bowls, and add toasted and buttered baguette slices, and a handful of shredded gruyere cheese: 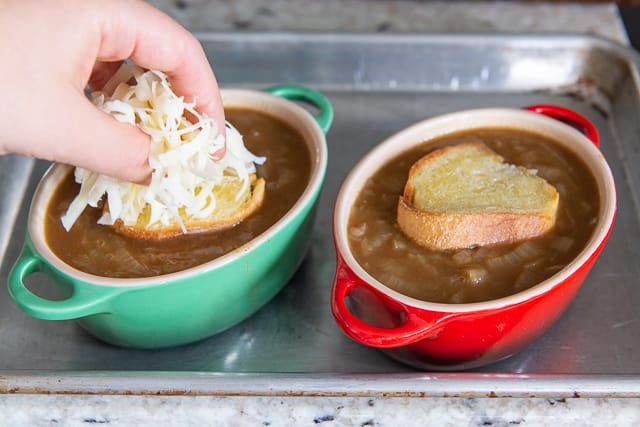 Place under the broiler for a minute or two, until the cheese is bubbling and golden. Then it’s ready to hit the table: 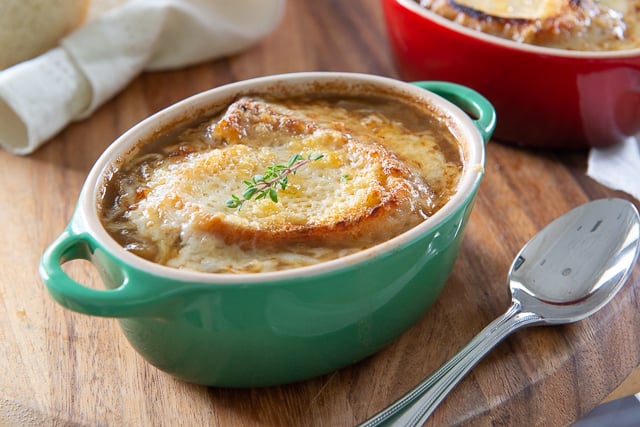 Can you make French Onion Soup ahead of time? Absolutely, and it makes for great leftovers. Just reheat the soup when you’re ready to serve, and broil it with the cheese and baguette.

Can French Onion Soup be frozen? Yes, once it has finished cooking, let it cool, then put it into airtight containers. Thaw before serving again and adding the cheese and baguette.

How long does French Onion Soup keep? For at least 5 days in the refrigerator, or 2 months in the freezer.

Do you have to use Sherry? I love the flavor and it matters a lot for the aroma, so try to get some if you can. I recommend a more dry than sweet Sherry. However, you could also use a dry red wine if that’s what you have.

*You may use unsalted or salted butter, whatever you have. **It is very important to use a great quality beef broth. This is one of those products that varies wildly by brand. I didn't believe it until I did a taste test on my own. Imagine brand and Better than Bouillion are good choices, but I'm sure there are other good quality ones I haven't tasted.