Home » Travel » Food Highlights From My Tasty Trip to Paris!

Food Highlights From My Tasty Trip to Paris! 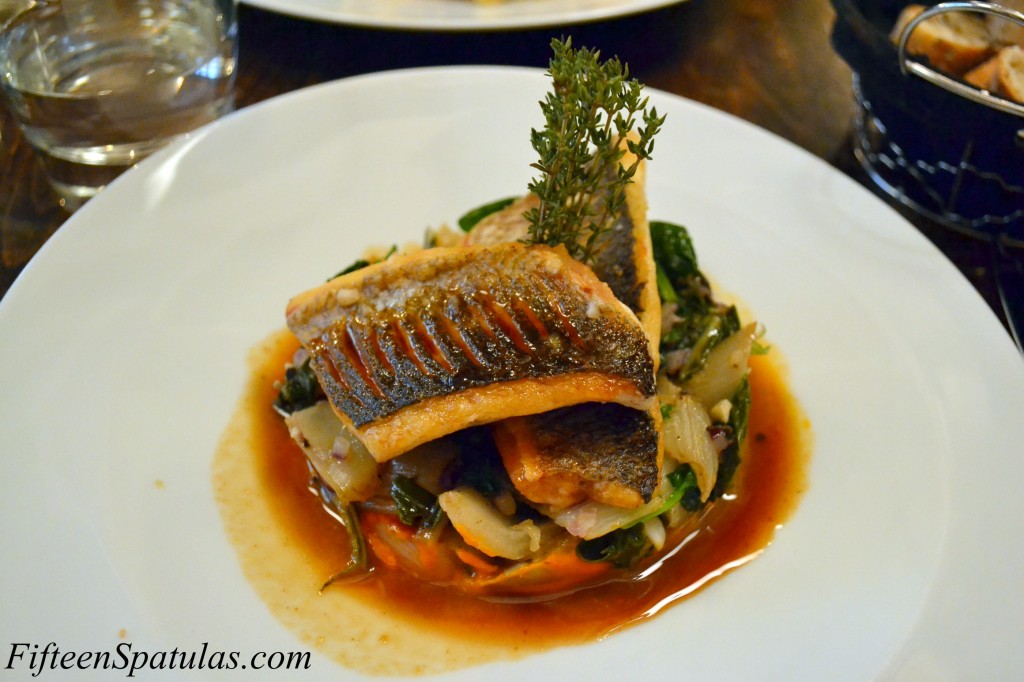 Bonjour lovely friends!  I am back!  I had the most yummy and fun vacation in Paris with my husband Pete over the past two weeks, and WOW, I was expecting the food to be good, but I was completely blown away.  Asparagus and olive oil macarons, the best croissants I’ve ever had, the famed Berthillon ice cream, escargot, tons of croque madames, and a million other lovely foods made my tummy (and eyes) very happy while I was there.  Oh, the history, art, and culture were great too, but we all know that the food was the highlight of the trip for me.  So let me share a little taste of the food with you, but don’t worry, I will be sharing more photos from Paris for this coming Wordless Wednesday.  Let’s dig in: 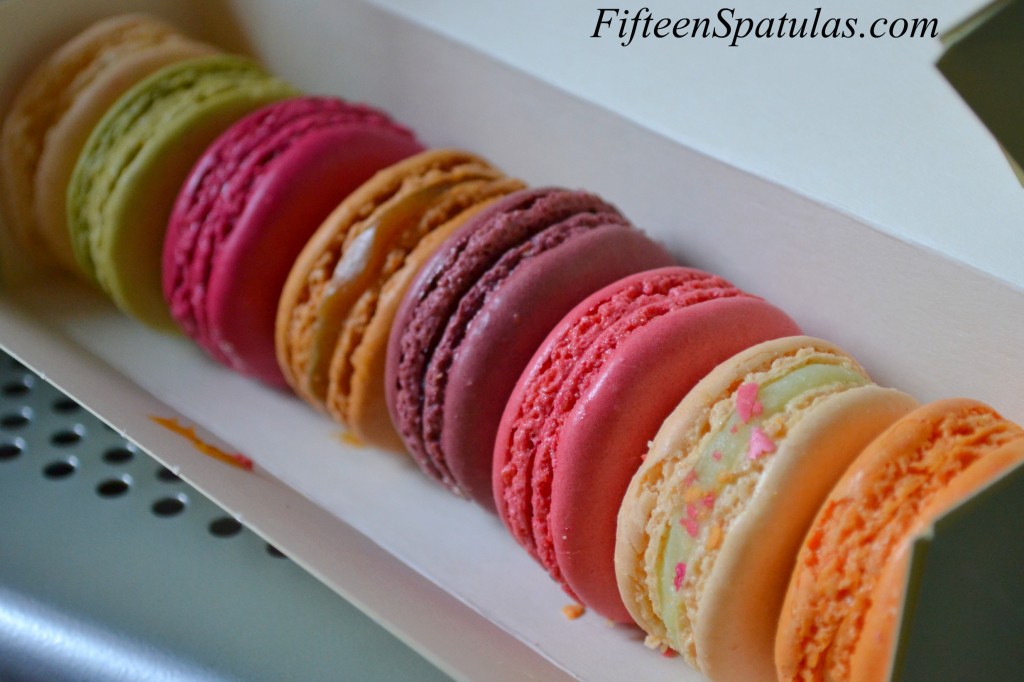 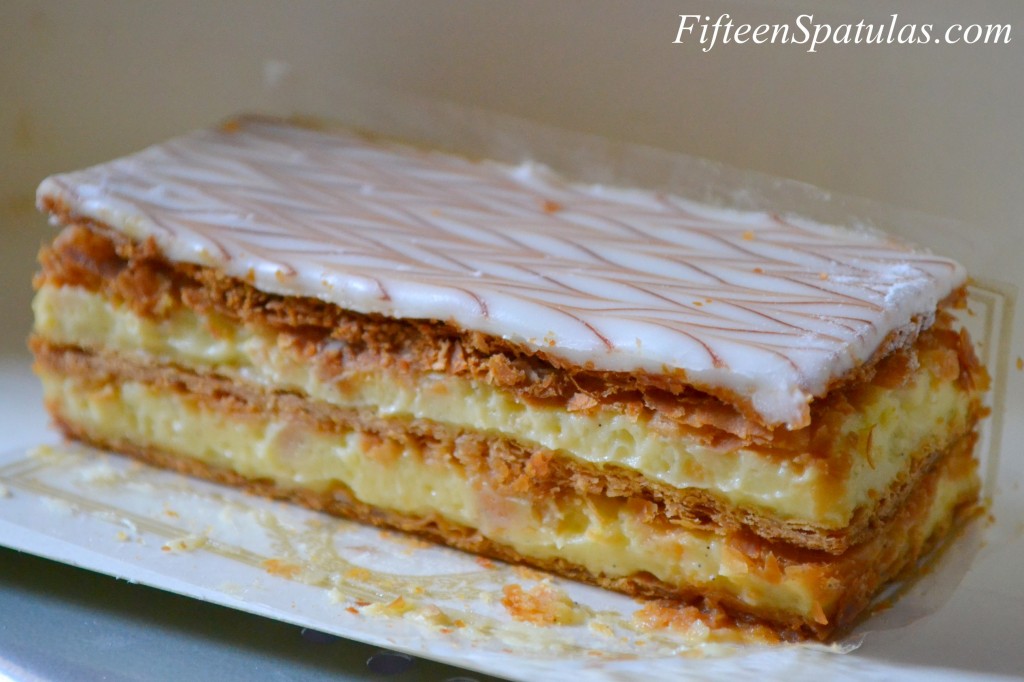 The first photo was taken at La Ferrandaise, a fantastic French restaurant in the Latin Quarter.  I have no idea what I ate (obviously some sort of fish).  A lot of the places we ate at did not have English translations, and I know zero French (maybe I should have became fluent in French rather than in Spanish)!  The funniest part about the restaurant was they served us a platter of radishes with a cube of olive butter.  My husband and I were convinced they were playing some sort of joke on us.  What on earth do you do with a bunch of radishes and butter?  The butter was rock hard, so the radishes could not be dipped, nor could the butter really be spread on them.  Oh the French…they confuzzle me sometimes.  At the same restaurant, I had this lovely dessert, a berry mille feuille of sorts: 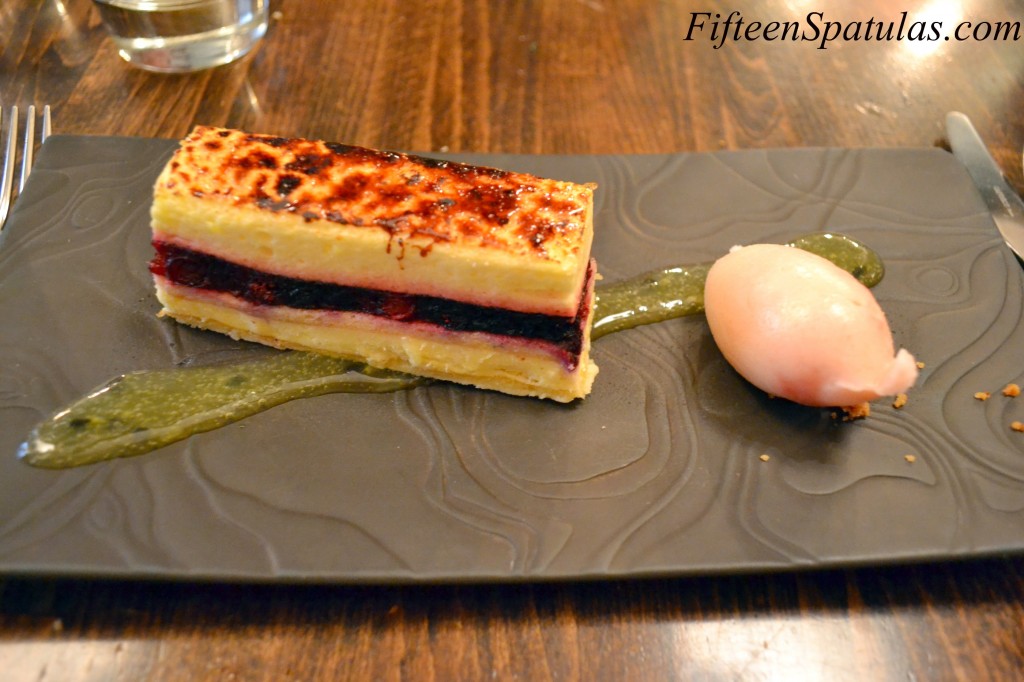 The other two photos on the front page are of Laduree macarons and a Laduree mille feuille.  Laduree is famous for their macarons, and they deserve it.  Those macarons knocked my socks off!  Orange blossom, rose petal, raspberry, pistachio, vanilla, violet, and all sorts of lovely flavors.  The mille feuille was pretty awesome too.  BUT!!!!  THEN I had the macarons at Pierre Herme.  THAT GUY IS AWESOME.  He had all sorts of really interesting flavors, including an asparagus macaron, chocolate passion fruit, jasmine, and an olive oil one.  They were BEYOND SPECTACULAR.  When I bought them, I was a little skeptical that they would taste good (I mean, an asparagus macaron????  Huh???)  But they were AMAZING!  Here’s a photo of them, slightly smashed up in my purse before my husband and I made it to the Seine for our evening picnic: 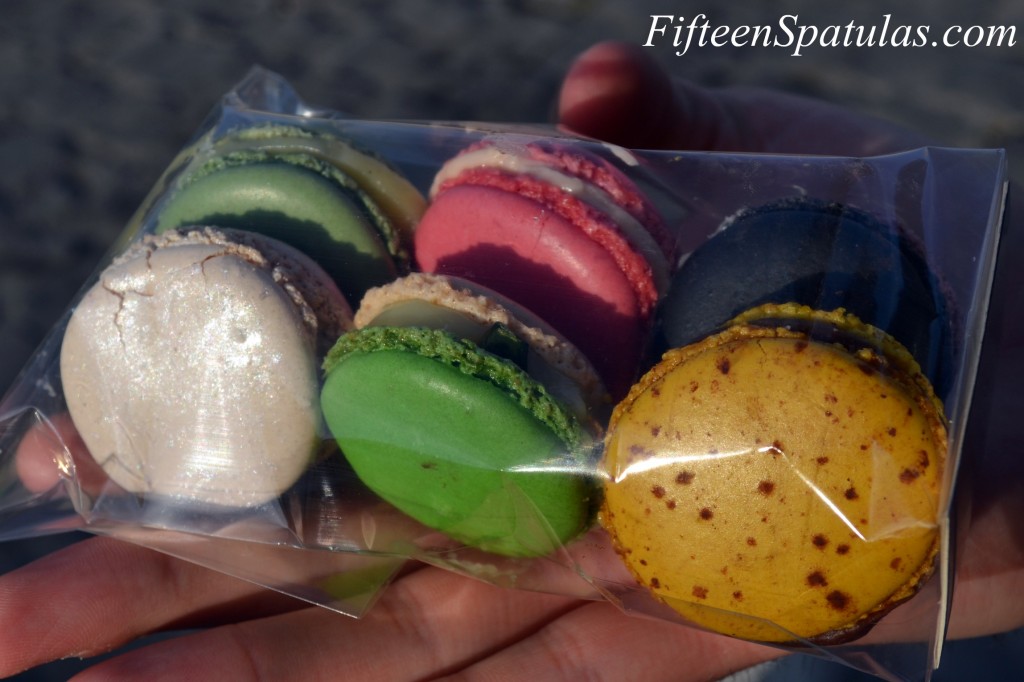 If I could have one wish, I would wish for Pierre Hermes to make me macarons every day =)

I also found this little boutique with Tunisian pastries.  They were very tasty.  Lots of nuts and phyllo: 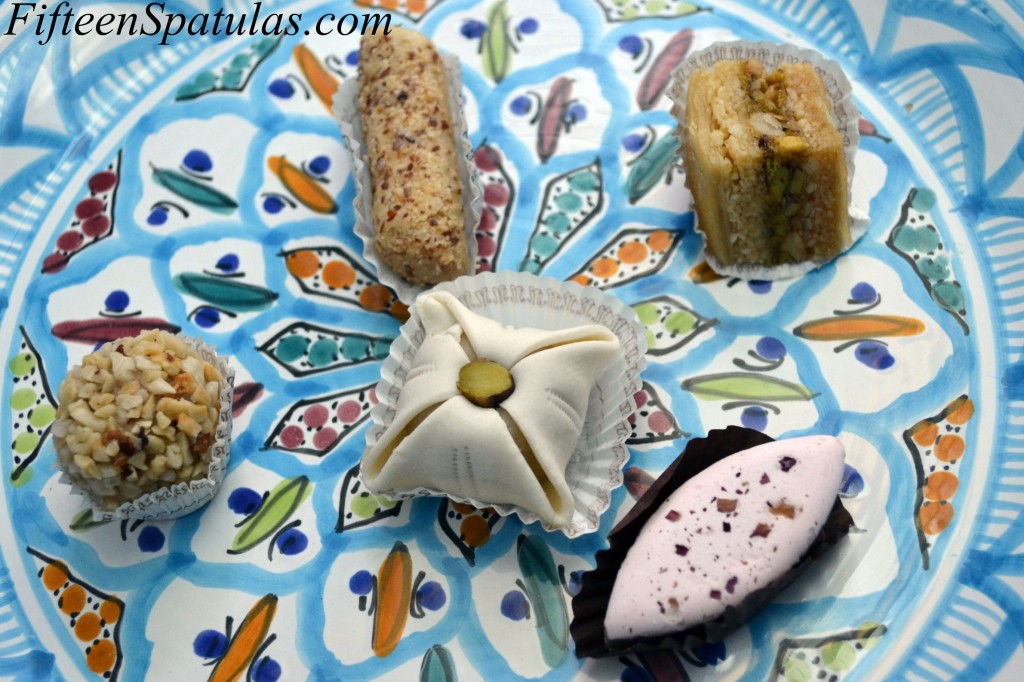 And look, a mussel!  Just kidding, it’s a chocolate that looks like a mussel.  And it was SO GOOD.  Some sort of praline nutty filling inside the crispy exterior: 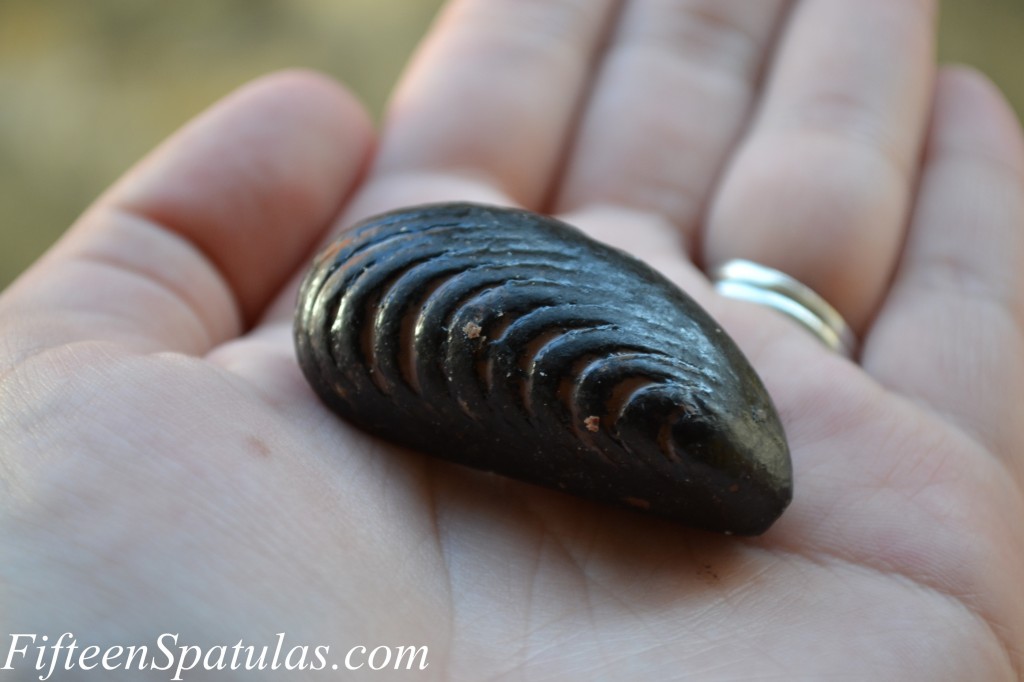 My husband and I had at least one fancy pants meal a day (and we hit a record for our most expensive lunch…$120 for an app, 2 entrees, and dessert, no drinks…ouch)!  This one was one of our favorites, and it started with a tasting tray with potato leek soup, a lamb croquette (I think…at one point I was concerned that it had brains in it), sea bass ceviche with a lemongrass vanilla sauce, and some sort of salmon ravioli with some sort of foam: 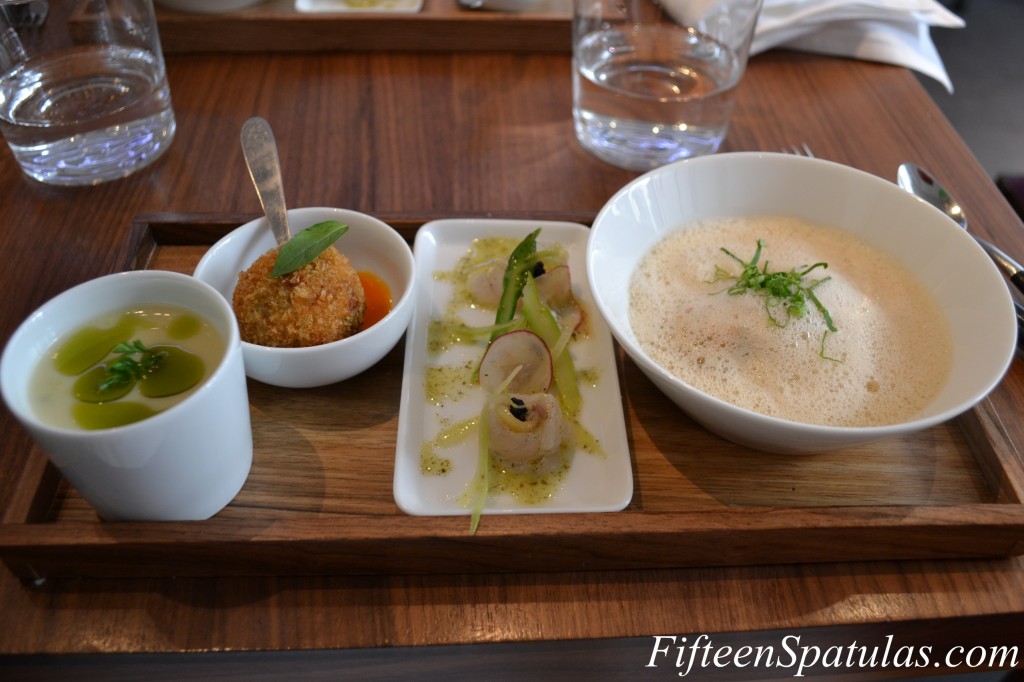 Oh, and let’s talk about the puff pastry.  One of my favorite parts of Paris was eating a freshly baked croissant every morning right on the street.  Hands down the best croissants ever, and we also had this yummy apple turnover thing.  LOOK AT THE PUFF!!! 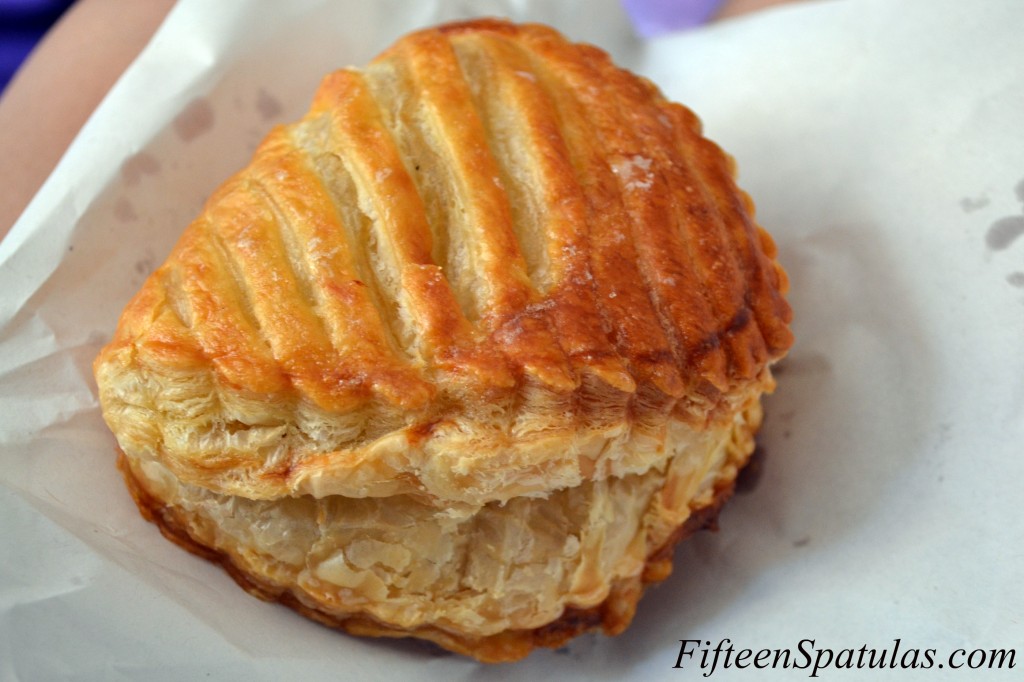 Another goodie we had was this thing that I don’t know the name of *sigh.*  It’s like this crispy caramelized shelled bread pudding.  If anyone knows the name of it, PLEASE, enlighten me! Update: this is a canelle! 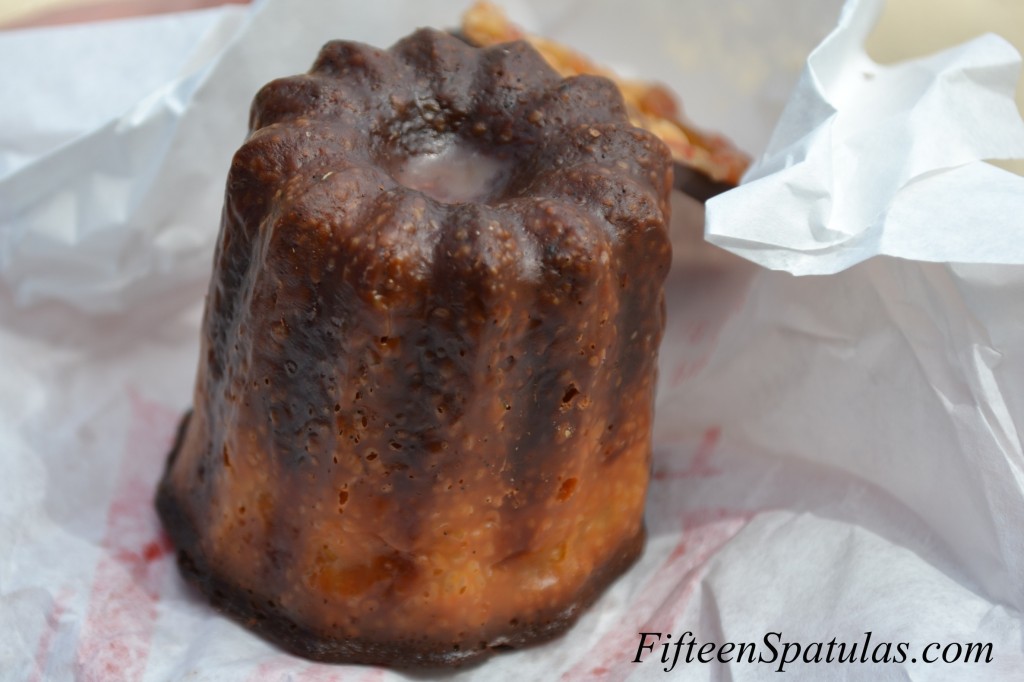 Here’s another lovely dish I had, white asparagus with some sort of aioli, chorizo, and vinaigrette.  I’ve noticed the French are in love with white asparagus: 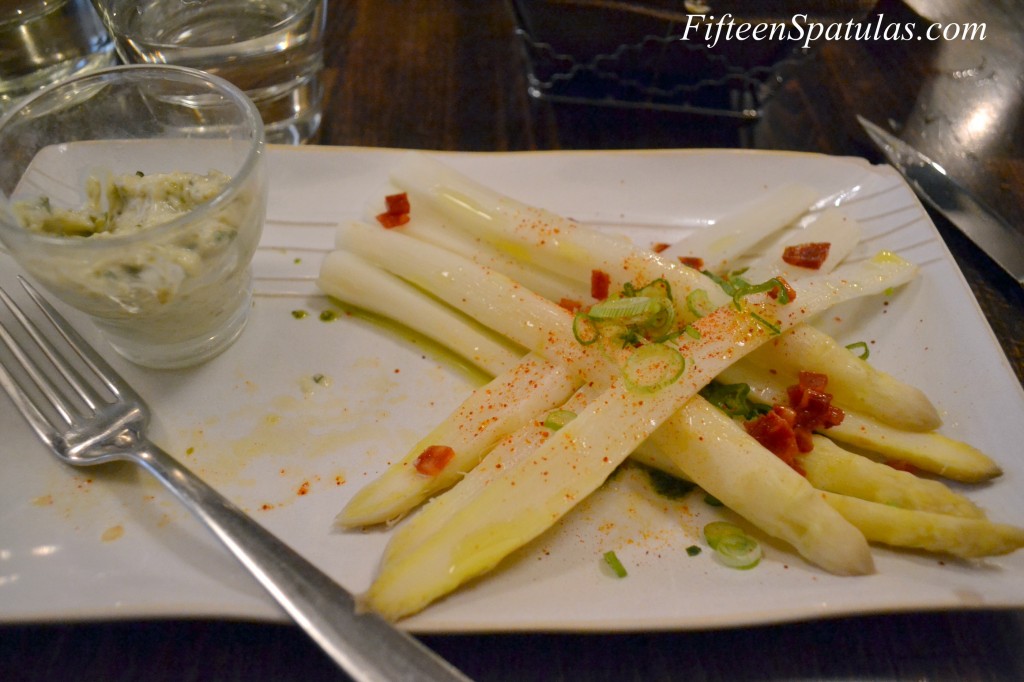 Not only does French food taste good, but it is so beautiful.  They definitely care a lot about presentation.  Check out these super awesome chocolate sculptures I saw at this one chocolate shop: 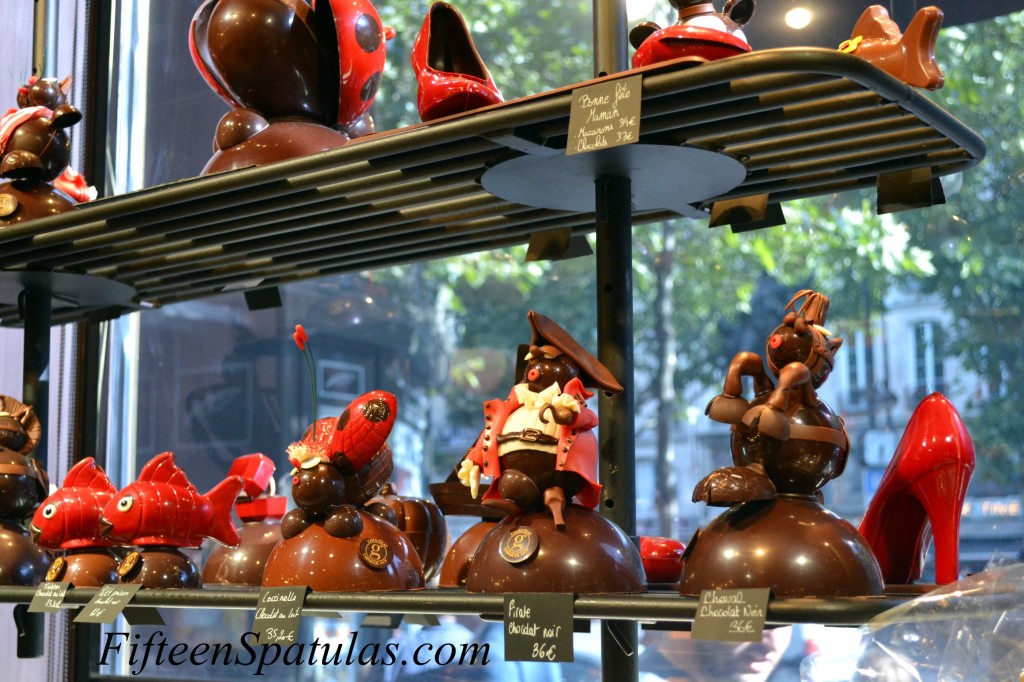 And last but not least…Berthillon ice cream.  These scoops are tiny…they used a 1 tbsp scooper to serve up the scoops, and it’s about $8 for a 3 scoop cup.  But it was worth EVERY penny and my husband and I had ice cream there almost every day.  The stuff is nothing like American ice cream.  It has very powerful flavor, and each tiny little bite is more satisfying than a bowl of any other ice cream I’ve ever had.  You can tell they really know how to use the fruits to make their ice cream spectacular.  I wish wish wish we had this in America: 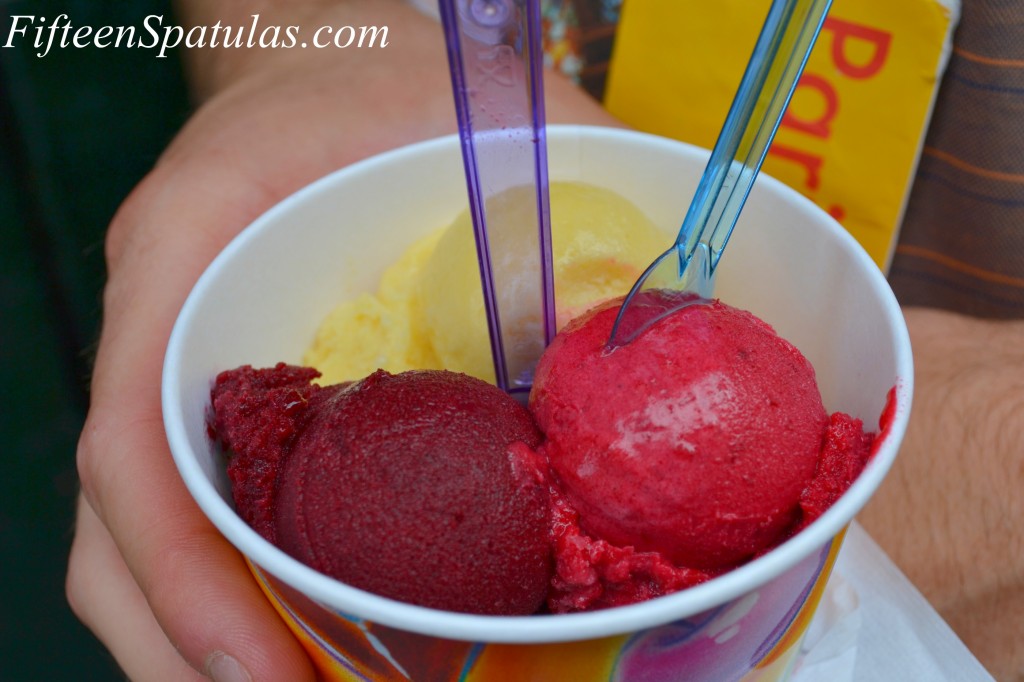 Alright, I think that’s enough for now.  More photos coming on Wednesday!!!  Tomorrow, a recipe =)  See you then!  So happy to be back!

16 Comments on “Food Highlights From My Tasty Trip to Paris!”